The new Wuotan is not chosen by deeds and valour, nor by long, grey-headed debates of tact and cunning-- in fact, to an outsider, the decision is reached far swifter than many other Chapters.
For as one dies, another is born straightway-- all a Sago Astartes must do is witness the death of their own Chapter master.

It is seldom that the martyrdom of such a hero would not be witnessed by many of his brothers, but the overbearing influence of Dorn's Darkness is what makes this method of being chosen viable; for after seeing such trauma before their eyes a Sago Astartes is gradually consumed by a self-loathing that, if not checked, will escalate into suicide shortly after.  But he who overcomes this darkness will often turn it into a heedless anger, and that's hardly any use to a child of the Praetorian either.
But those who overcome, those who remain resolute and accepting of their doom, those will rise above their brothers and take hold of celestial glory as Wuotan, son of the Astrological echo of silent death, such as his full title. 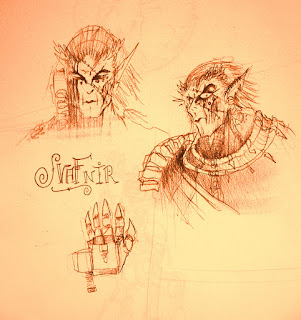 The last of the the Sago Chapter Masters, Wuotan Crowback was a devastator in past life, tasked for decades with carrying the Chapter's only plasma cannon to war.  His name was brother Svafnir in past life, and they called him Crowback for his odd addition to his power pack; he hoped to become heilagr if he hadn't witnessed the horrible slaughter of his lord by the hand of a ++data pending++ chaos champion.  One other of his flokk was with him and he took his life shortly after the conflict was ended, but Svafnir sought out the Chapter Master's shattered corpse and brought it back to the Nastrond with much weeping.  They then placed the helmet on his head, and so he became Wuotan Crowback.

Where possible, Wuotan will choose to fight alone, as is his wont, but sometimes a flokk of the 1st company will humor him.  Crowback in particular likes to surround himself with combi-plasma as such archeotech may be spared.  He himself often carries Sick Child, a plasma pistol used by the last, deceased Chapter master and every other before him-- so ancient it barely works and only holds charge enough for two shots, sometimes three.
He wears the disintergrator pistol Magdalene too, a treasure worth more than his own life, along with the power fist Melancholy Requiem.

Back to home page