I'll be away for a few days on the peak of Mount Arthur, so I will post now.  I'm quite near the end of completing my 3rd assault Captain, and am very excited about him, so sorry if I begin to ramble. 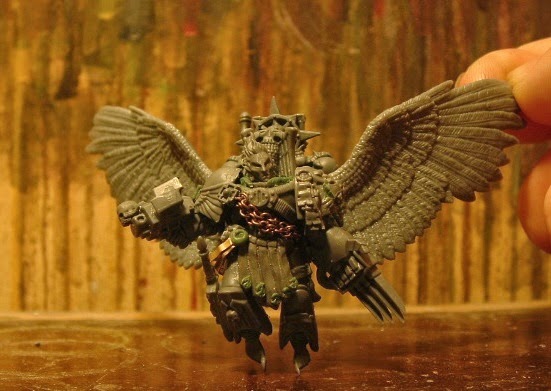 Lord Baldr, rites-lord and captain of the Blodfjord; the Bloodied-wings.  Armed with storm bolter and lightning claw-- and yes, those are wings.  Brettonian pegasus wings.  But I like to think my excuse is at least a little plausible; however, I'll only explain if enough interest is generated.  He has a pair of Scourge's feet and a Solarite's head. 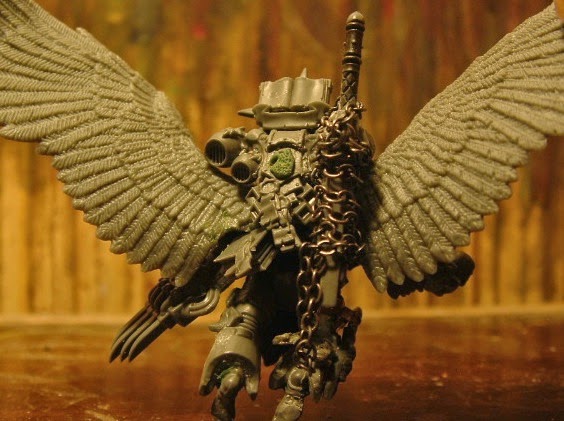 The backpack is from a Chosen one from Dark Vengeance, cleaned up a bit so it is a little less chaotic, with an entirely re-purposed Chaos icon as an Iron Halo.  Observe a version of the Chapter icon in the middle; normally, the device is in a halo, but I'm not at that skill level yet to sculpt such a thing.  I also wanted to wrap the chainsword in razor/barbed wire, but I can't find any decent suppliers. 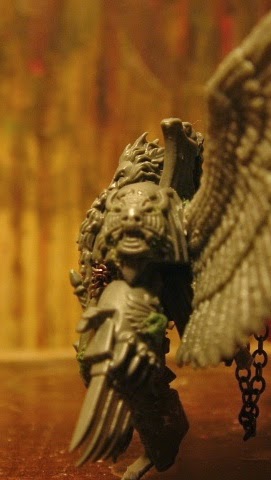 Aaaand picture's blurry.  The shoulder-guard is from the vangard veteran kit with a terminator honour on top.  The Chapter has only ten suits of Terminator armour not counting the 1st Captain's, and if an Astartes wants to learn to fight in one he has to amputate his wings; so the terminator honours must mean something else. 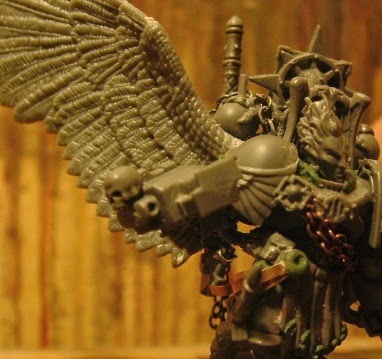 The bolter is a design I like to think I invented; that of putting a trigger hand underneath a Grey knight's storm bolter.  If you'll look closely, you'll see I shaved the skull knuckles from the other lightning claw and used them to decorate Baldr's pouches. 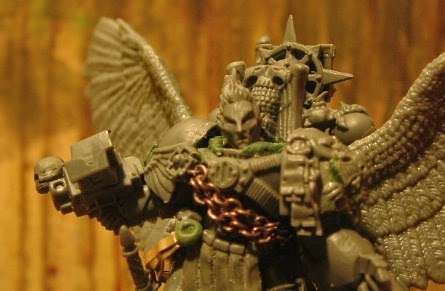 His face reminds me of a Zora, which is good, I was going for elegance.
The collar, I wanted to look like two bird heads, but the one on his right looked more like a bird's skull; so that was okay, I helped it along a bit and there we are.  The micro-chain is from this place in town called the Bead Gallery.  They were having a closing down sale last I saw. 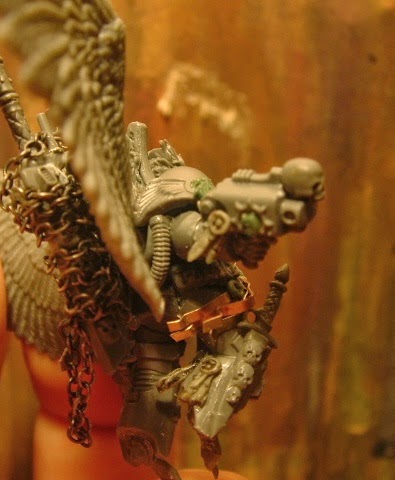 Not sure if you can see what's going on here... I shaved some purity seals from the terminator chaplain miniature and used those.  The knife is a Blood Angel's one, covered in skulls shaved from different places, I think maybe the side of a weapon of some sort.

And that's it for now.  My third Captain.  Next post I think will be about my trip up Mt Arthur.