The door of the crowded bunker leaned in, heralding a wash of mud and the sallow face of the commander; the whole of his gaunt body proceeded a moment after, bearing a scrap of parchment in one hand and the shoulder of the greencap vox in the other.
'On your feet, guardsmen!' he cried, sending the whole room into a frenzy, 'won't be long now before reinforcements make planetfall-- here,' he pushed the mouldy scrap under the vox's drooping nose and said, 'Pettibrough, the transmission.'
Vox Pettibrough was the only one who could read binaric vulgaris-- and barely at that-- and his voice was thin and reedy as the shattered message was relayed to the platoon.
'Glorious house Terryn... something something, breaking atmosphere two... "Aldrich", crusader... something father... and a bit about staying alive and the number of men left.  Sir.'  Pettibrough saluted and was manhandled back out into the trench.
'We've only got to wait for Terryn to arrive,' commander Bullywad said firmly, 'two hours, and the field will be ours.  Look alive, guardsmen!'

***
Lines of collapsing trenches circled the outpost, but so far heavy bolter fire had the better of them.  All their transport was gone, so retreating was out of the question, as was a final, glorious charge at the gate.  Their only hope lay on the wind, a heavy thudding of monstrous steel feet on the rain-soaked ground, ever drawing nearer.  Commander Bullywad raised his magnoculars and once again counted the grinning masks on the walls, once again turning behind to survey the valley stretching behind.  The heavy step of bullish corporal Crampkin beside him did not break his gaze.
'Sir,' the big Cadian girl broke the silence, 'they've opened the gate on the north side.'
'Not a moment too soon,' the commander murdered, 'our saviour arrives.'
Crampkin produced a telescope and gasped. 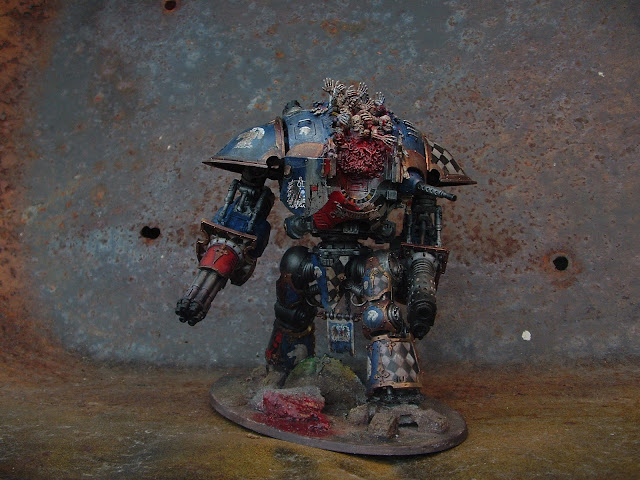 'What in Throne's name have the fates sent us now?' she snorted, 'is this your Aldrich?'
Commander Bullywad nodded slowly.  Step by wavering step, Aldrich staggered up the valley, each heavy step shaking every joint in its vast, metallic body.  The grinning masks on the wall began to slowly turn their pintle weapons toward the horizon.  The commander seized up his personal vox-caster and hissed into the receiver to send a squad to cover the titan's passage, seeing with concern a familiar swathe of black shapes scuttle behind it, closing. 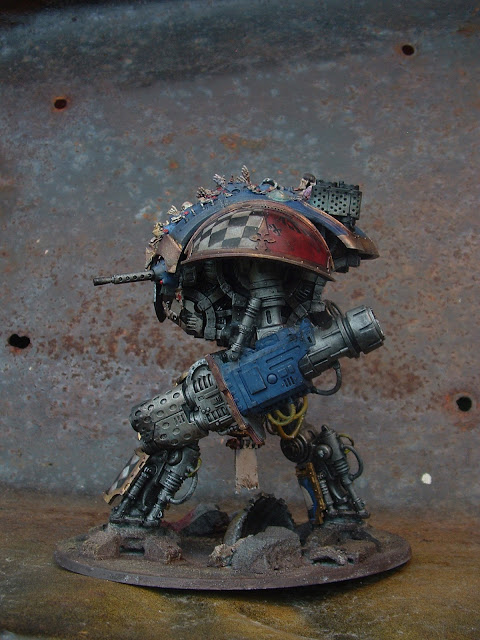 Before long a scuffle had ensued around the oddly oblivious titan's feet; green and white clad guardsmen spitting ruby bolts of Imperial light into the scuttling black things who threw handfuls of long knives in retort.  Bayonets were bloodied, some men fell, and all Bullywad and Crampkin could do was watch, along with the grinning masks on the wall. 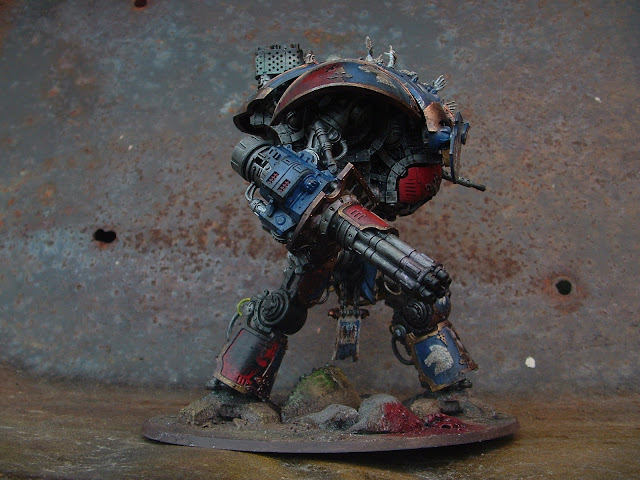 One of the black things lifted a long tube and, with a flash of green smoke, Aldrich staggered with its right knee buckling.  An awful, titanic scream of pain echoed back and forth, drowning out the attackers' thin, raspy cheers.
Then all went silent.
Weapons were lowered.  The black things began to advance on the titan, ignoring now the blades of the guardsmen, they clawed, stumbled, swarmed up the knight's legs, and to the commander's horror, climbed inside a ragged gash in the carapace, where they vanished. 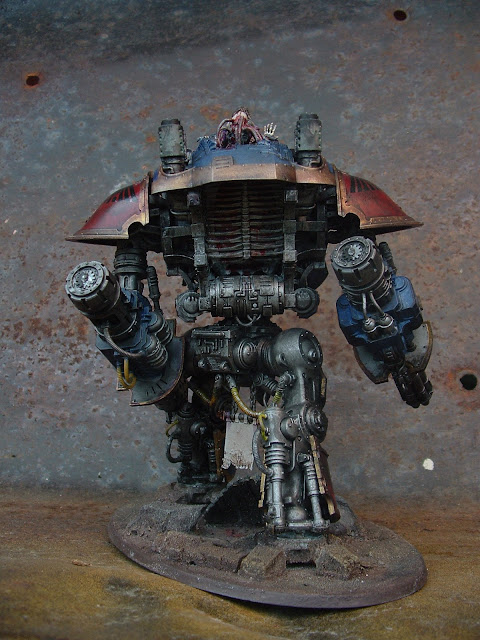 Almost instantly, Aldrich stood straight, shook itself, and continued to walk.  Now within ordnance range, shells began to pelt down like rain about the grubby blue and red monster.
'Call your men back, Sir!'  Crampkin urged, 'this is hardly martyrdom on their part!  Sir!'
Commander Bullywad mouthed a dry response but did not move to ths vox-caster. 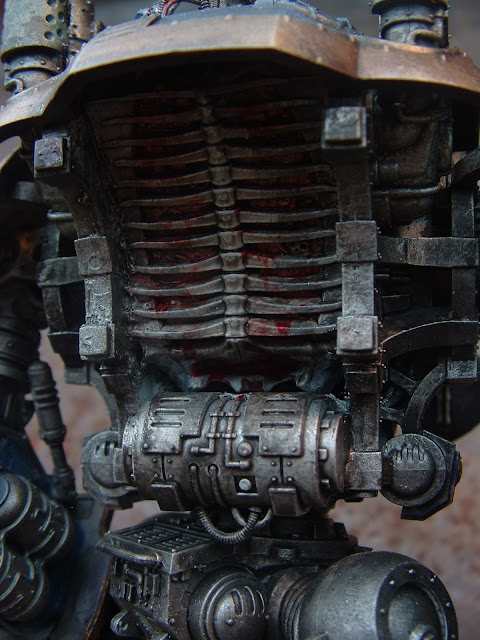 Every time a fire-trailing missile scored Aldrich's hull, it would scream and stagger-- and almost as if to respond, his men, the commander's own men, still struggling with the scuttling black things, would turn around and climb up the titan's legs, up into his split carapace, where they would vanish.  A seeping, glittering mess of... something was making its slovenly way down the titan's front... 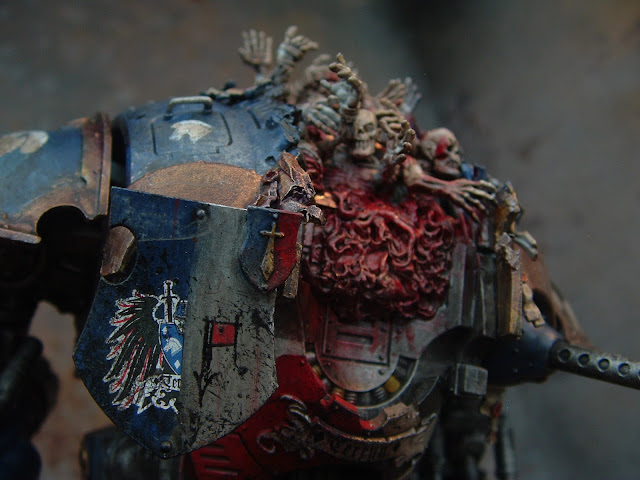 As it passed, a rain of mud and corpses, heralded by a bone-shattering peal of thunder told the officers their own trench had been struck.  Bullywad lowered his now-muddied magnoculars and saw Crampkin turning away towards the titan.
'Where are you going, guardsman?' he spluttered, 'Do not approach that knight-- that is an order!'
The corporal turned to regard him a moment and replied, 'but he's been damaged, I think I can repair him!'
'Guardsman-!'
Coproral Crampkin dropped her telescope and ran towards the lumbering shape, and all the commander could do was watch. 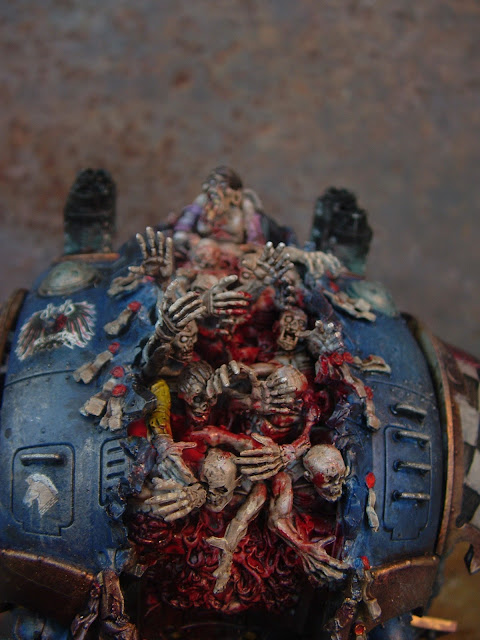 Well, that was sudden!  A week ago I don't think Aldrich was even primed!  He was a bit of a mission to put together initially, but once I figured out a solid method to put the corpses in, it was all pretty much downhill; a simple loyalist house scheme, nothing special paint-wise.

So that's that!  Pretty soon he should be parcelled up with Victory Awaits and sent across the big blue to their new home in the states.
Once again, do you want anything built or painted?  Remember to have a look at my commissions site and email me @ lonely.kitbasher@yahooo.com with your request! 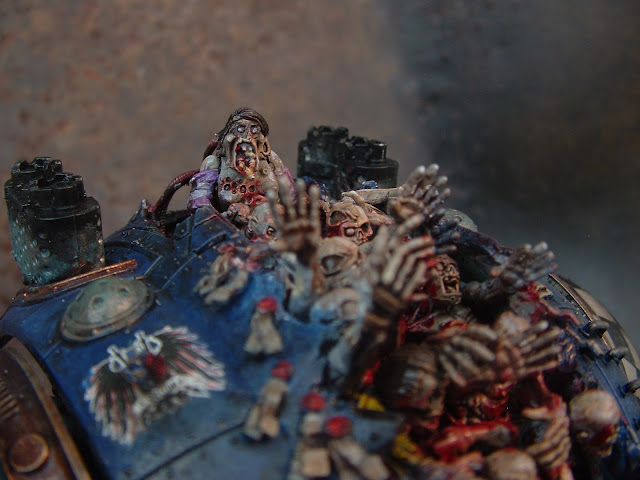