They had seen a god once before, and to see another, like this and so soon, what did it mean?  Was the end of days upon them?  It did not walk screaming from the hanger doors of the distant palace had the other at the first; this one had torn a hole in the mildewy hangings of the sky and had fallen upon the hive with death under its feet.  Thousands were injured in the earthquake and maybe five times that number were dead now and the god had not even SPOKEN yet, what horror visits Brillig now?  With a great hand clutching with roaring fingers into the rockcrete basillicum of the outer hive it drew a horrible chain weapon back to its waist, and with a thousand deafening noises drove it into the body of the stack, ripping out hundreds of hab-blocks into the eradiated, outside air with a flick of the blade.
Then its mouth opened and death was all it said.

There was no resistance anymore-- the available PDF (poor fools!) had meekly surrendered to the billowing clouds of plasma spoken form the awful maw and now they were all scrabbling at their melted bones with bubbling, hollow cries for help venting from hissing lungs.  The god gave voice a murderous laugh and stood upon them, reveling in the noise they made in spite of his own.  Hive Acapella would be his before the sluggish sun fled the sky-- and then, another.
Another god.  Two gods, and neither were that first god they knew.  That first one was green and black-- this one was brass and blood with many faces and a whirling cannon that spat a hurricane of fire in a heedless, maddening whirl of chaos.  Chaos?  Do not speak to me of that word!  I know what these gods are, they are not at all gods, tell me no different!  They are men-- MORTAL men-- sitting within suits of ceramite, do you not understand?  Just like our beloved Loman Silenzi, are they are but the same as he?
The mortals in suits of ceramite knew of our Silenzi and turned upon the distant hill were slumped his palace, skittering down the hive-stack and wading through the filthy outskirts with wild sweeps of their awful weapons that killed thousands of undeserving bodies as if they were nothing.  Whatever could stop their march?  Sir Silenzi was not here-- he was gone-- gone, with the sons of his house (those at least that remained).  He had left many of his family within those palace walls and behind three walls of stone, each a mile high and encompassing the hill all about, but would that be enough to stop these titans? 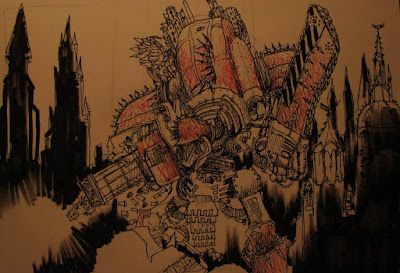 'You have seen them?'
'Yes, M'lady Banquo,' the elderly maid trembled, dropping the pict-slate she had held with a crack upon the floor.  The faded curtain she faced tore open a little and a bony hand reached out of the darkness, along with a taut, 'show me.'
'I can't madam.  I can't.  I can't.'
The curtain parted completely, the lady Banquo gathered her dresses in the other hand and rose from the couch.  Her low voice shivered as she spoke.
'Did you get word to Loman?  He should be here, not on his crusade.  He should be here.'
the chamber-maid's head shook stiffly and she hid her face in a 'kerchief.  The lady cast her matted locks over her shoulders and trailed out the chamber door into the dark hallway, followed by the shivering maid and a gradual build-up of terrified servants.  In the shadows, all were weeping for their lives, helpless before the doom they now heard-- they heard thumping, thumping, thumping, thumping towards the end of time, thumping, now without the outer gates-- thumping, THUMPING--
'Seppo, Seppo!'  The lady cast her hands over her ears and ran with her veiled face to the floor, 'Seppo, wake up, where are you?  Seppo!' but her lover would never answer her.  She was left alone, all alone in a doomed palace...
'Madam, the White Rose is still here.'
'Why do you tell me this?' a shivering tech-priest blocked her way, weeping with empty hands upstreched to her in childish hope of maternal comfort.
'The White Rose,' he repeated, 'it hasn't moved since Sir Loman went away.'
'But Seppo said--'
'Help us, madam.  I don't wat to die.'
Then before her, amid the distant thumping, thumping-- the little tech-priest whose name she did not even know produced a plasma cutter and shore his throat open, choking to death at her feet.
'Celli,' the chamber-maid appeared at the lady's side after a minute, 'where do the titans sleep?  I don't know where they are.  Show me.' 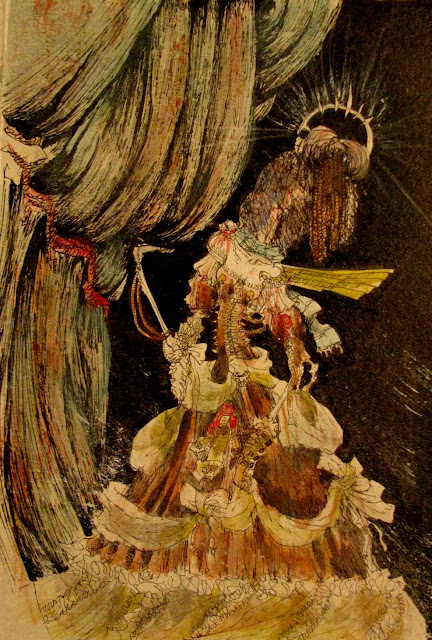 The outer wall had parted willingly under their tread and now the two titans closed the miles of dust between them and the middle wall.  There were guns on that wall but they did not care much for them.  They were pitifully short-ranged for all their size.
'What shall we do now?' Green and Black asked Brass and Blood.
'The palace is the greatest concern.' came the gleeful reply.
'But it is nothing to us.  Let us climb the walls and break down the little roofs on top.'
'I'm looking for somebody.' Brass and Blood thought a moment before carrying on, 'he asked me to be here.'
'Why then am I here?'
'Because you may need to help.  You were there and I besought you, did I not?'
Green and Black did not answer.  Had guilt struck him?  Perhaps he was wondering who that "somebody" was.
Thumping, thumping.  It was not their own.
'Do I hear your Somebody?'  he said shortly.
'Perhaps,'  Brass and Blood crashed its cannon over the blade and shook the rubble from its teeth, 'Ah!  Who is this?'

Another titan rose to meet them over the hillock, an umber titan whose joints shrieked with inhuman pain every grinding step across the dust.  It had no face.  Bodies chained across the hull shuddered in the glassy wind and bled across sheets of hurricane netting.
'Knight Silenzi!' Brass and Blood called out in a voice that shattered the glass in the palace distant, 'Who are you?'
The faceless knight could not speak, so did not answer.  Brass and Blood was about to call out again when Green and Black halted him with his great hand.
'Stay!  I know this knight!'
'And so?'  Retorted the other, 'quick, he approaches!'
'I fought with him under the Eye, I saw him fall, I saw his death!'
'We are not like our princeps,' Brass and Blood mocked, 'We never die.  We cannot.'
Ancient photoreceptors could now make out closer detail on this newcomer titan, the snarling gargoyles dripping with rusted chain and the brass rose icons growing across the cannon and blade.  Green and Black hung his head.  He remembered it all.
'I cannot fight him.'
'Cannot?  WILL not?' 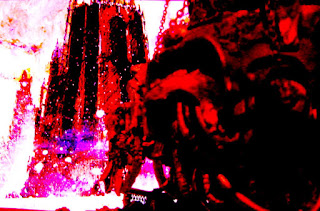 The ground recoiled beneath their feet as a shot exploded under Brass and Blood, who stumbled and dropped to one knee.  Green and Black turned away with a cry-- and all this granted him was a chainblade in his back.  He shrieked and shrieked as the awful teeth ground down to his midriff-- plasma whistled into gas-- blood rained-- and the freeblade boiled away into a screaming mess of molten ceramite as his reactor gave up its illusion of a ghost with the force of a miniature sun.  Brass and Blood cursed the knight and cursed the explosion that turned him over upon his back and blinded him with an almost solid, burning smoke.
He saw the knight who killed his sell-sword turn.  A cannon, three times the length of his own drove into his neck and pinned him down.  The radiation-blasted wind carried away the dead titan and a little of the smoke with it, and the faceless titan looked down with pitiless, eyeless malice upon her fallen enemy.
Blood and Brass smiled an faint grin beneath his carapace of ceramite.
'You are not him, are you?' he hissed.  '...Who are you then?'
He turned his head and saw the image of a White Rose upon the pauldron-- and the smile left him.

Well now, that was a thing!  The story is loosely based on the first time I got the White Rose into battle-- I spoke of it in this post here, somewhere towards the end.  Both drawings are mine, the photo has a John Blanche image in the background.  I like doing that.
Not sure why I imagined Brass and Blood to be a massive grin under a nazi tin hat...
Part two will be published shortly.  What'll happen next, will Brass and Blood gain his feet again?  Will the fight drag on or...?  Throne I'm terrible at hype...  hee hee, never mind!  This short story thing is fun!  Bye bye for now.