This is a two-part story.  Here's part 1 if you missed it.

'Why... why are you here, Separo?'  The renegade scrabbled for desperate comfort against the wall as his assailant approached him with regal piety in his long, elegant stride.  A rubber rebreather left his face and the scion of Silenzi looked mockingly down at the floundering, legless renegade.
'Father called me, and I answered.' His hand returned to one of the three still-grumbling chainblades on his hip, 'take your axe and get up quickly, quickly!  Let's end this before my patience proves thin.'

Snarling in indignation and masked pain, the renegade dragged his body upright-- as best he could-- increasing weakness filled him as his blood fled through his leg stumps.
'You can't even stand,' Sir Silenzi noted unhelpfully, 'this won't do at all.  Thrice-born waste of time, why bother anymore?' the chainblades stilled at his touch and he turned away with a spiteful, 'find me when you have legs again and we will finish this.' 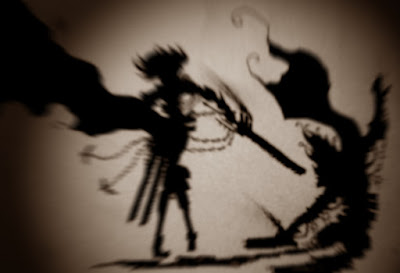 'You're not Separo.  You can't be.'
The monster of the Imperium drove her battle cannon deeper into the smoking neck of her foe, who struggled but was pinned to the ground so could not rise.  'You're not Separo, who are you, to wear his plate-- but his whore?  You have no honour, you won't remember me!  You're his whore, you're that Francisique!'
The White Rose uttered a voiceless noise in response, one of utter fury-- but her stance slackened-- Brass and Blood caught his roaring chain weapon under her cannon and cast her to one side as auto-systems fought with his mind to find his feet.  Missiles sang.  Shrieking noise.  The renegade took a bounding step back, filling the air with shot that carved great furrows into the pied and ochre plate of the Silenzi titan-- tearing with ease-- blithe ease through the sheets of hurricane netting where plate should have been and casting sparking smoke up from her body-- she forgot her void-shields!  Brass and Blood laughed a sickening laugh as the White Rose danced awkwardly beneath his withering fire, bathed in flames and staggering, stumbling-!
'You can be my whore, Francisique!' he shrieked, 'deny me Separo, indeed!  You will have to do!'
His eye cast up and saw the creaking tabernacle strapped to the Silenzi titan's back.  A monument to some dead relative?  It would be better gone.  Uplfted the screaming cannon began to spin again.


Ceramite and tiles shattered before the murderous touch but his attention had faded a moment, and like a lance the silenzi titan had caught him in the neck again.  Another mechanical noise of fury, and the wasted ruin of a heavy stubber began to bark into the renegade's eyes-- putting them out.  Brass and Blood screamed in agony and shore the battle cannon in half-- he tore from the White Rose but the last thirty feet of the weapon still stuck like an iron arrow from his neck-- rendered blind, he now was compelled to rely on the depthless machine eyes upon his missile pod and his own rust-caked stubber.
For a minute skilless blows were parried and the stump of the cannon was knocked aside as it was brought again to bear.  This whore didn't even know how to fight, pathetic wretch!  Even her brats-- had she any-- would wear their titan shells to greater effect than this!
Where was the honour in this?
... And who bloody cares now?  Brass and Blood smiled again and drew out his stance.  Honourless, yes, but all it would take but a blade to the knee or the ankle.  The blade swung back to strike.

And the White Rose closed, bringing her chainblade shrieking down into his shoulder and crashing her faceless mess of piping into his chest.
Normally so close, there would next ensue a horrible war between void-shields, but the lady had forgotten hers so Brass and Blood already had an upper hand...  But now he found he couldn't move.  Of all things, the Silenzi titan had planted her foot upon his-- but he couldn't see this, and how he struggled!  One arm pinned and useless, the other whose arc was now out of range...
'Check,' he spat.  Missiles were out of the question.  Were they now to leap upon the backs of their war machines with blade and pistol?

The lady seemed to think so, for the blood-soaked mesh across the yawning hatch peeled back and she crawled out, lugging behind her nothing more than Separo's chainswords.
'You have legs!' Brass and Blood heard her thin voice for the first time, 'you can finish this now.  Come!  Seppo grows impatient!' 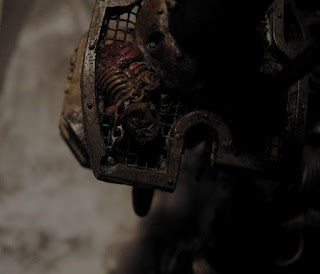 Oddly enough, that day heralded the first time lady Banquo took a life.  From her soft life of comfort she was torn and now all she knows is anger and death.  The limbless body of that noble traitor to the house now swings from the White Rose's battle cannon, flies picking at his crumpled body as he watches mute horror the destruction she wreaks for her cause.  His knight, they took it and threw it into the blackest depths of the world where none could find it again; his shame, though, surpasses the pain he endures now, for he mocked an Imperial child of Silenzi-- and her temper is fragile.

So that's that!  A fairly abrupt conclusion I suppose, but titan battles are a bit difficult to write about, seeing as things take so long for them to accomplish.

Slightly off-topic, the middle image is about the extent of my skill with citadel paints on card.  The variableness one can achieve with the thickness is nice-- drybrushing and wet-blending with the same medium, fancy that!

Hopefully next time I might have some painted miniatures to show.  My desk's a bit of a mess right now and I'm still experimenting with a new method of basing...
Posted by D at 13:59