This was bound to happen.

Yesterday I was heading in to town to get my last two wisdom teeth removed when I had a (rather chaotic) brainwave; teeth out normally end in a lot of blood, and if that blood could be contained for later use...
10 minutes before my appointment I rushed into the local games shop and began scrabbling through the shelves-- Khornate, anything Khornate would do-!

And then I saw him. 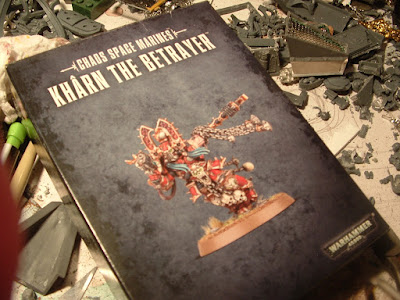 As soon as I got home after a 3-hour operation I collected my "paint" and assembled Khârn as quickly as I could-- kitbashing was out of the question-- and the kit was technically being released to Australasia next day, not sure how I managed to pick him up now... Excitement was mounting...

But Throne, the sculpt is amazing!  I'm no authority, but I think they've brought him up to date very well indeed, pigtails and all.  He's a lot better proportioned, for one. 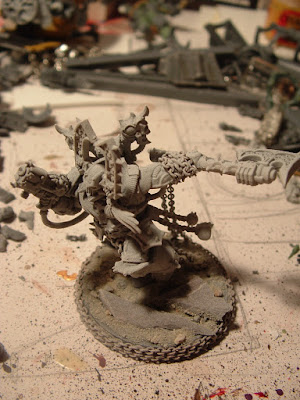 The simplest of bases would suffice; sand and a bit of grit and jagged stones.  The only kitbashing I allowed myself was replacing the chains on his wrist with normal microchain.  Props to GW for sculpting plastic chain, but this is so much thinner and tidier than what he did have; also I wanted to turn the chain into a bit of a decoration on the base.

The first step was to paint Khârn in his original World Eaters scheme, and for how cruddy a job it was, he did look pretty cool.  Dryad bark for where the brass would go after a few more layers, and black for the silver.

So then I opened the pot of blood-- by now it smelled a bit rank, but oh well. 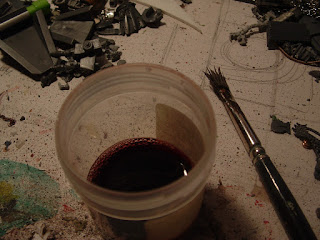 The first few coats went on, and Khârn's transformation began...  I left him by the window to dry off in the wind. 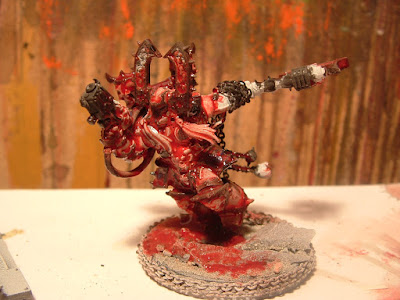 A few more layers and a realised the red of the saved blood wasn't going on quite as thick as I had hoped... 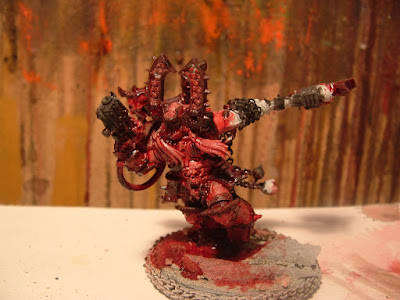 So once everything was dry I ran off to fetch a bit of paper for a proper backdrop, opened my thumb up-- a favoured spot-- and applied several coats of fresh blood.  Khârn really did began to stink at this point, but I kept adding layers... 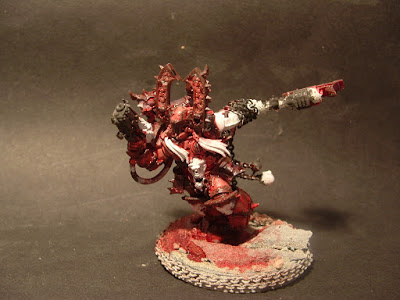 Much better.  The red was more crimson than pink now.  Now was the time to put the rest of the colour on. 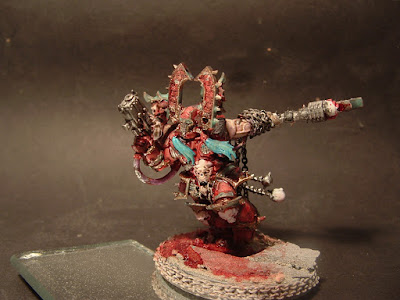 The pigtails, metal and rust, brass and oxidizing, more layers of blood... 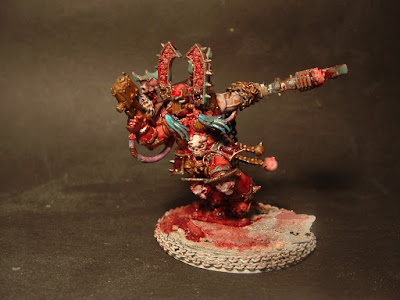 Pretty soon all that was left was to take him out into the daylight to photograph him... the colour I had achieved actually terrified me.  What have I done?  What? 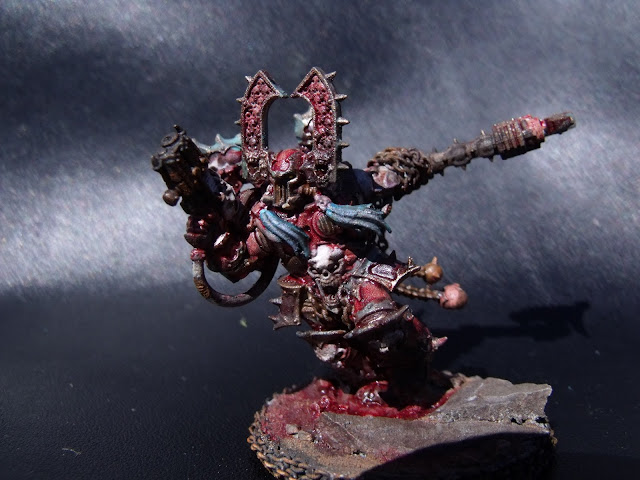 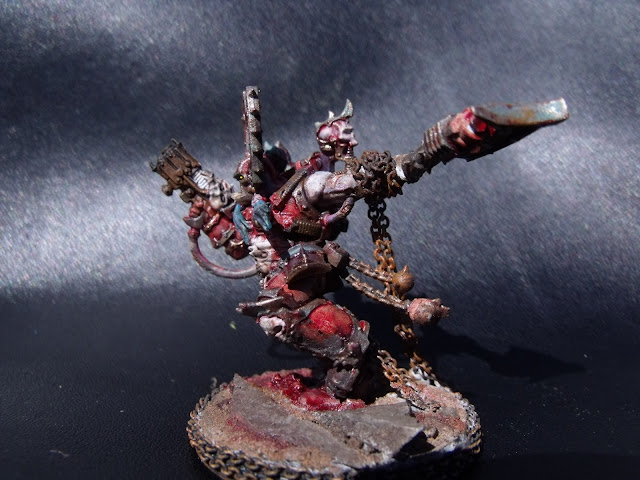 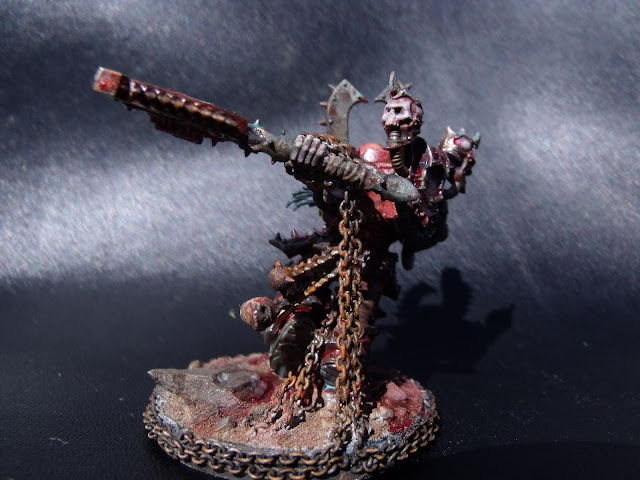 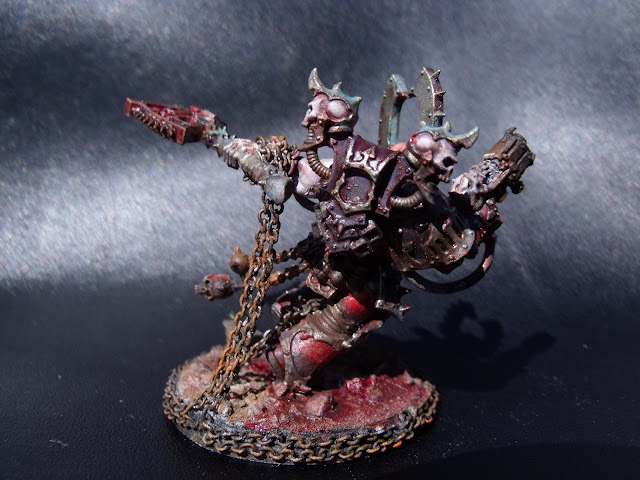 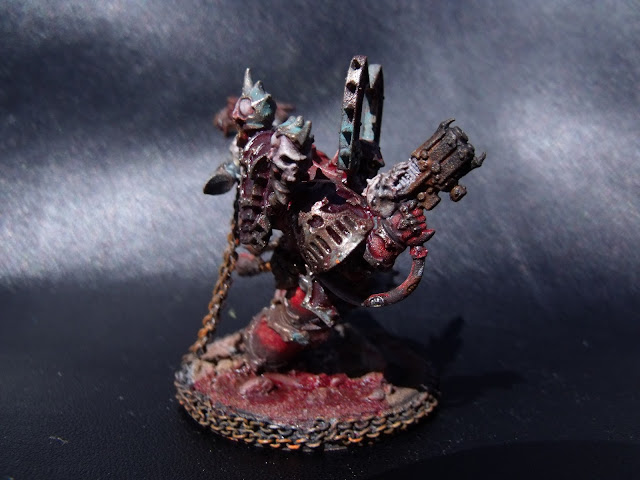 Throne help me, I cannot appear before the Emperor's face the same way I used to...  Bye bye for now. 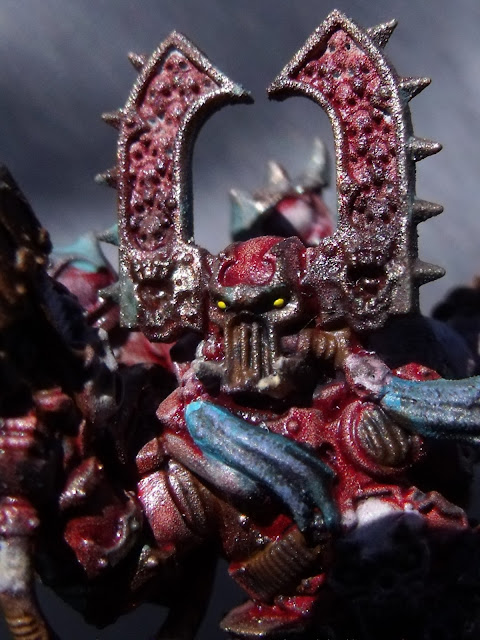