Kitbashing Alone with a Dream #1: so much greenstuff 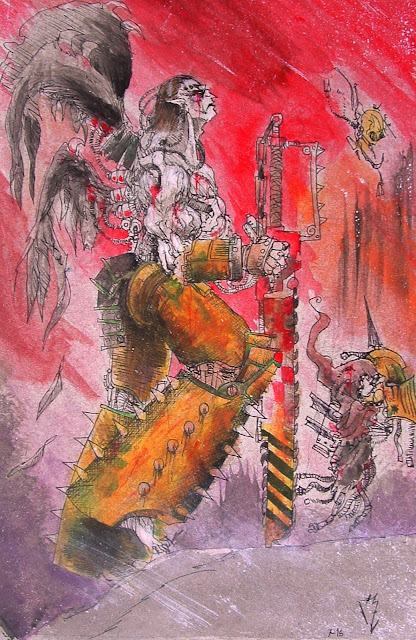 Assault brother Alone with a Dream, Eyreling of promise and forsaken under the Doom Chair.

Seeing his flagellant's state, one would hardly know that once, in another life it seems, he was a veteran sergeant of the Sagodjur Fjorlag's 4th company Himinfjord, seconded to the halvard of the elite 1st after a mere half-century of service.
Fate brought his ruin when a librarian's miscast gate of infinity swallowed him up and sent him fifty years into the past to the paradise world of Acropolis Quartus, a world of what he called "space pixies" over whom the corrupting hand of Slaanesh was slowly gaining mastery.  Instead of liberating the world from the xenos as was only his duty, Alone sided with those uncorrupt and fought with the daemonic creatures for five years; the uncorrupted pixies worshipped him as a god and one even proclaimed her undivided love and devotion for him, unaware that all emotion is wasted upon an Astartes.
Those five years passed and chief librarian Niflgugninn transcended time and tracked him down after single-handedly bringing Acropolis Quartus to burning compliance.  Brought back in shame to his Chapter, Alone's skill at arms was shunned and he was returned to line duty in the 4th assault, stripped of honours, armour and titles, he now carries an immensely weighted chainsword for his penance.  It had been said, though, he brought the pixie who fell in love with him back to the Nastrond and turned her into a cyber-cherub...

Alone with a Dream chooses to wear as little plate as necessary; the concern behind this self-flagellation being a shadow of taint, though he calls it punishment.  After his muscle tone had adjusted to the intense gravity of Acropolis, no suit would fit him now anyway.  His triad of wings, while misshapen from breaking through that planet's atmosphere, can still carry him, just-- and he refuses to have them seen to or amputated in place of a jump pack.  As a result of his accident, he refuses to fight alongside psykers and has developed a maddened fervour in their eradication, traveling the stars to seek teachings from the epitome of all witch hunters-- and the Sagdjur Fjorlag's legendary brethren-- the Black Templars. 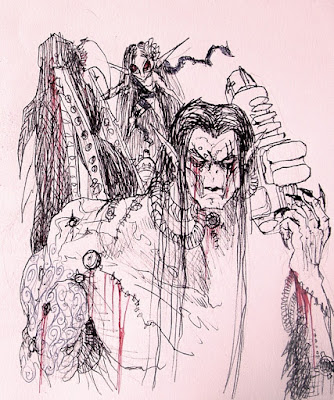 I suppose you could call him my blog's mascot.  Alone with a Dream was a character I created long, long ago when I wasn't sure what direction my Chapter would take, and I named my blog after him.  He's one of those characters that grew with the Sagodjur's lore, and one I liked so much I was always afraid to try and build, like blodfjord librarian Snerra, or even Master of rites, 3rd lord Baldr.  There was always the first, embarrassing attempt, and Alone was no exception.  See, look-- here's my first interpretation of him from back in 2014: 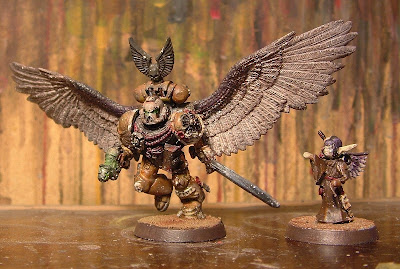 While I suppose it wasn't too disgusting, I'm embarrassed by it now.  Also he only has two wings-- Throne, what was I thinking-!?
Anyway, seeing as it was my 21st birthday yesterday, I thought it'd be a good time to have another crack at sergeant Alone again, and this time I was more prepared... 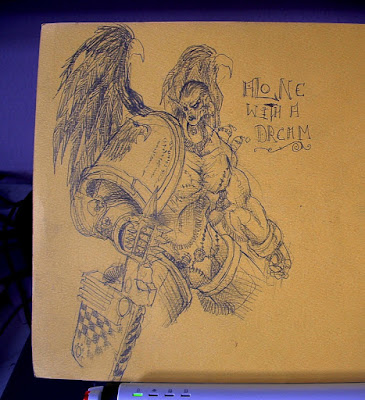 First of all I had a go at drawing what I generally wanted him to look like.  I like the whole incomplete power armour look, it's quite gladiator-ish and something more loyalists should be doing; maybe not without the codpiece, though.

I was going to start with a WoC charioteer body like my 3rd chaplain, but this kit would be much, much more exciting to start with!  Also the finished figure would be taller and broader than an ordinary Astartes, even the WoC bodies I use almost exclusively now.  A BA head worked quite nicely after the jaw was cut down a bit,  greenstuff hair and a pointy ear because I like pointy ears.  The other ear is a vox feed from a normal helmet. 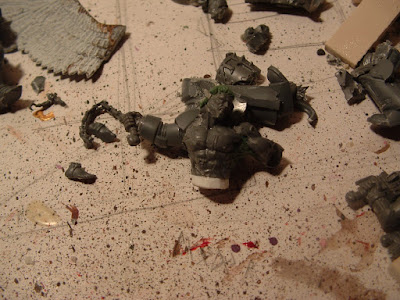 I'm copying the pose of FW's Corax.  The tilt of the torso seemed to lend itself well.
But now the whole size issue posed a bit of a concern about legs.  At this size, not even terminator legs would work, and stormcast eternal legs, while okay, were too leg-shaped.
Oh well! 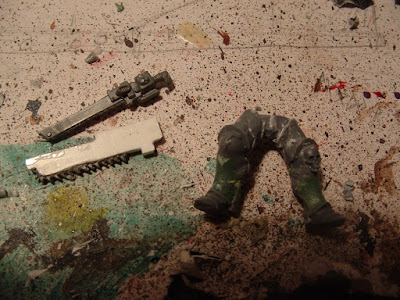 A bit of reposing was in order.  There's the start of his chainsword too, alongside a normal one for comparison. 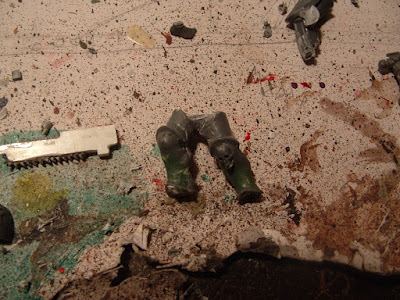 I began building up around the calves to make them more blocky before giving up and putting the two halves together.  I couldn't bear to see him in two bits! 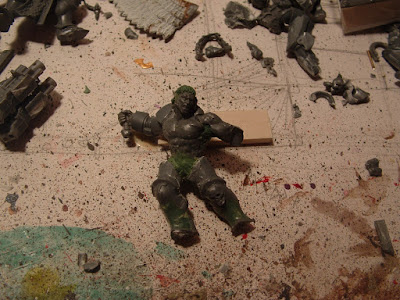 Not sure if you realise, but with Astartes power armour, the legs are separate pieces and the soft armour at the hips only covers the space in-between; this means one can potentially wear them by themselves. 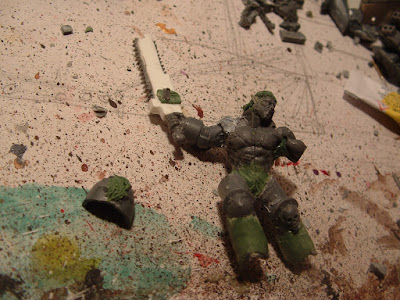 Continuing to build up around the calves.  They're looking a lot better now.  Also I hollowed out the ribbing around the armpit to sculpt his normal one instead. 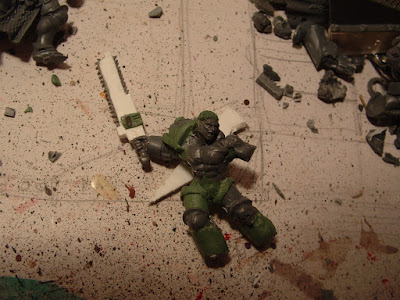 Here's where I'm up to at the moment.  The edging will be trimmed, I assure you!  I put a lot on so I can clean it up after it sets, that's not what it's going to end up like!

So that's that!  So much greenstuff!  Maybe if I finish the blog's flagship character, all my other projects will begin to get finished  more efficiently...?  We shall see.
Bye bye for now.
Posted by Unknown at 16:40