"repainting" a dreadnought part 1: yet another nice game...

I painted a dreadnought some time back in 2013.  At the time I thought I'd done a fabulous job, but I did not know about watering down paints for washes and so it dated really quickly. 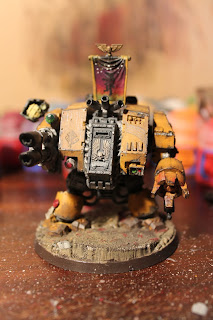 Three years on and now he just embarrasses me.  He has done me proud in battles past, oddly never getting into close combat but his lascannon has seldom missed.  His most glorious moment was when he took on three traitor guard basilisks at once and destroyed them without so much as a hull point lost.  Other people have commented on his paintwork, but like I said, he just embarrasses me.
So I have decided it is time I repainted him.

Of course, to the Lonely Kitbasher, repainting means pulling completely to bits and getting very, very distracted.  It goes rather against what I normally like but I'll be giving him every weapon option in the book.  Here's what I've got to work from so far; 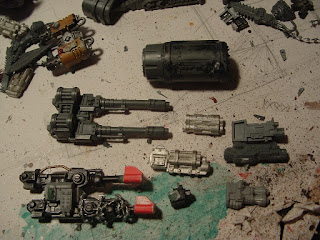 I wish I could give him a twin-linked multi-melta...  he has earned the right to become a venerable dreadnought, that'll open up one or two more options.  I'd like to bring up now; there's a fine line between disturbing Imperial and just looking orky; so often I have seen the line crossed, and I wish above all things to keep my loyalty at least a little obvious.

At first I was just going to give him some templar icons and re-prime him, but then I remembered something I've wanted to make for the longest time-- 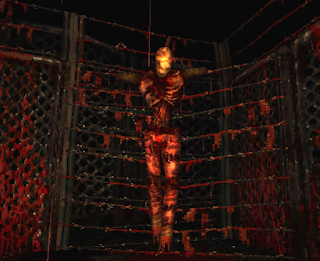 Now, trying to fit everything in a sarcophagus is not the easiest of things, but I think I've managed to compact it into something believable, using a skeleton horseman for the base. 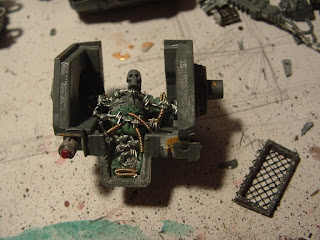 And lots of barbed wire and hurricane mesh, just what the doctor ordered.

So that's that.  Yet another another distraction from everything else.  I need to finish my stormtalon before the end of the month, I'll be attending a 750 pt tourney on possibly the 27th, and I'll be taking my biggest units for a bit of fun.  One of the fellows has an IK, I can't wait to see how the White Rose will fare...