Dreadtober progress #2 I think: I surprised myself

This week's dreadtober challenge, assembly!  Have a look over at Brokenpaintbrush for the full details and a few links to some pretty decent tutorials.  Oh, and do make sure to  check out all the participants and their projects too.

Throne, but the weekend has flown by, even though I was taken with insomnia!  My Amphis' bane pattern dreadnought is coming together nicely, at least I think it has.  All the while I've been going through my ancient cassette tape reading of Lord of the Rings: Return of the king-- unabridged.  That really has helped wile the hour away a lot.

G+ followers would have seen this was where I was up to before; I'd made the side-- things?-- and had begun on the sarcophagus; but a large amount of progress has been done since then-- surprisingly for me.  I guess I'm just really determined this time to complete the project! 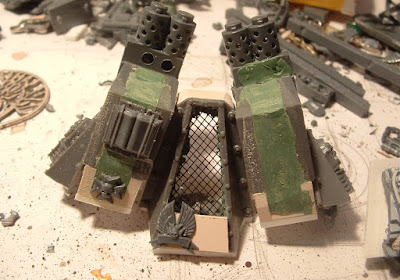 I finally decided how the land raider power plant would fit on the back; in two bits.  It's a bit of a mess back there, so I won't show you that yet.  Actually, I didn't think to take photos of the rear, sorry. 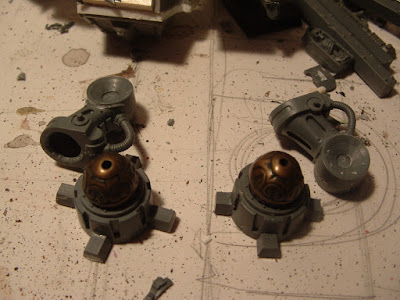 LEGS!  These were a problem to sort out.  They're spare forearms off the IK kit with the feet being the round bits from the rear of the weapon, you know that bit right?  I chose a fairly decorative bead for the ball-socket to look nice; let's hope that doesn't come back to bite me. 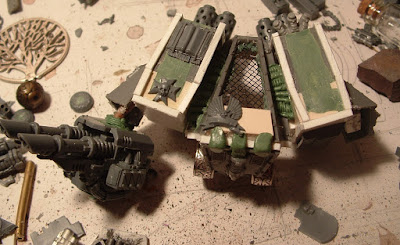 I was going to use the centurion's lascannons, but they proved to be too piddly small; I don't have a pair anymore but the land raider's looked a lot better, with a sentinel power pack either side.  It gives it an almost contemptor-ish air, which is nice.
Also see the beginnings of the waist/hips section, that'll become a major train wreck unless I can work some magic around it... 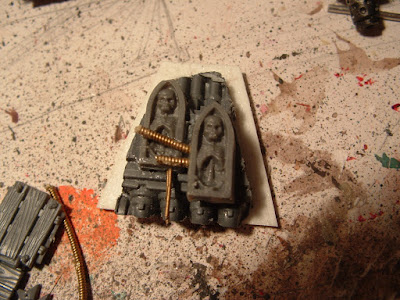 Here's the start of the interior, too.  Hopefully by the end of it all I'll have some fluff to go with this ridiculous idea.

So that's that!  A lot of progress, and I'm very (almost) happy with it so far.  Will I get it finished before the deadline of the weekend?  Please wish me luck!