He looked down on his swollen gut in numb misery.  How long he had sat in the darkness, how long he had felt those awful hands groping at his person, the intrusive piping and the whispering breaths-- oh, the whispers!  All he could see from the blank confines of a scabbed, solitary eye was the flickering square within his vision, a single, static-wreathed screen that whined in a voice, a white voice, a pitying voice that tore at him, tore at him!

Fearing not the traitor, for fear is a shackle...

They had bound him there, imprisoned him within the gutted, empty confines of his beloved, bound until this, his only love was one with him though he felt nothing, no heat rising from the sand of his arming pit, no pain from the mass of chains that bound his body to the pillars, blind like a judge of old-- only numb, empty cold.

Honouring my kinsfolk, for honour is meaning; house and Cog, Metalica our doom...

They had pulled his head from his body, and that channel yielded static until they replaced it with what he assumed to be his ceremonial death mask, painted in a fresh smearing of blood.  This led the misshapen figure to believe there was some significance to be had in the upcoming event.  Finding the channel that viewed from his tilt shield, he saw swarms of enraptured fans pawing at his feet, defecating across his warped shin plates or doing whatever they felt honoured him the most; he had seen expectant mothers give up the life within them at the sight of him, and they would offer up the dead ones as burnt offerings to their most adored warrior.

Spare not the heresy, spare not proposition, for Cog knows the doubter and victory awaits... 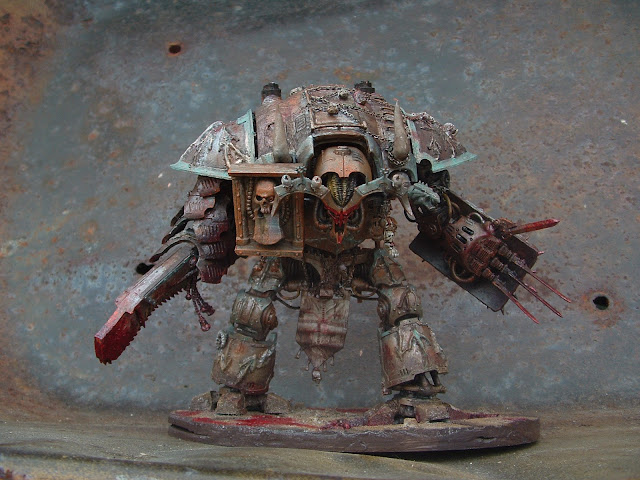 "Do you hear them?  The guitars, I mean," an empty voice wheezed like unspent breath through his chest, "A decent game, for once?"
"Maybe," he replied.  He could hear nothing, feel nothing.
"The spoils of the crusade may have yielded us an adversary-- maybe one even worth killing?"
"That's all you think about these days, isn't it?"
"It was all I was ever told to think." Free are the agents of a Cog-fearing mind; so fears the Raven and the Raven is free...

His body dropped his stance and bellowed savagely, sending the mad fans scattering with screams of delight.  What had he become?  A freak show, a means of entertainment...  A player in some demented circus, and quite literally too, bound until he earned his freedom, so said his masters.

He pulled weakly at his chains, as he did a thousand times before. 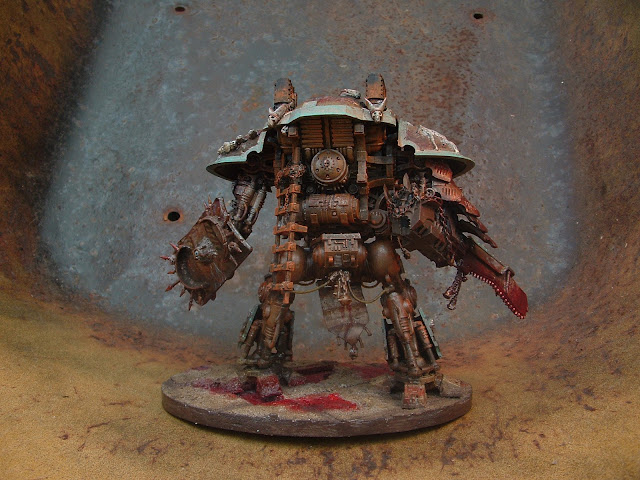 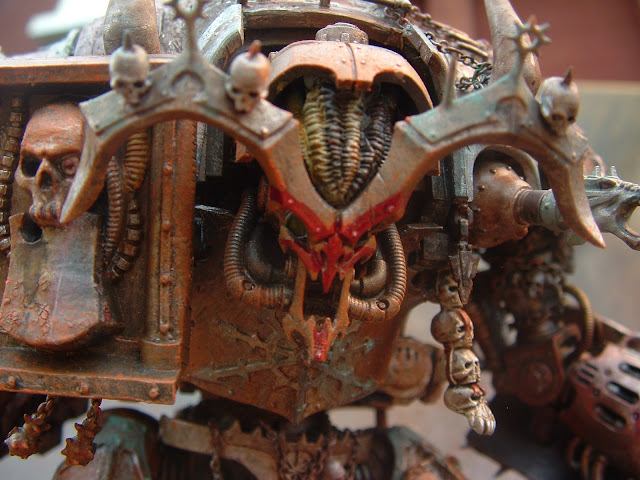 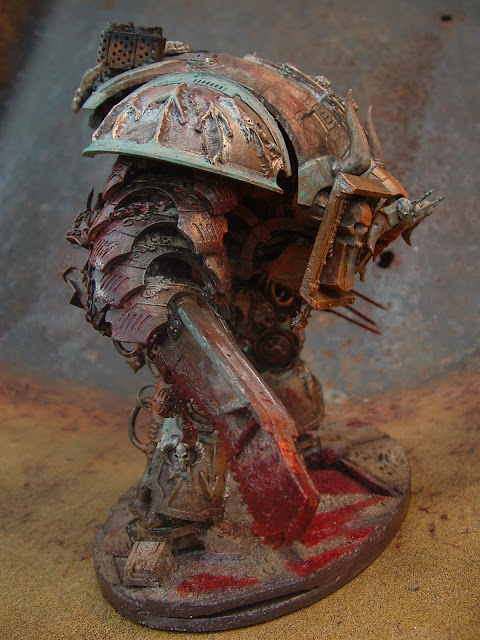 Fearing not the traitor, for fear is a shackle... 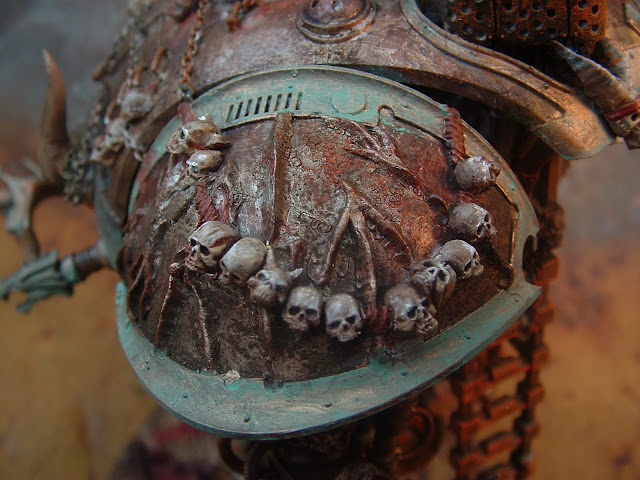 Honouring my kinsfolk, for honour is meaning; house and Cog, Metalica our doom... 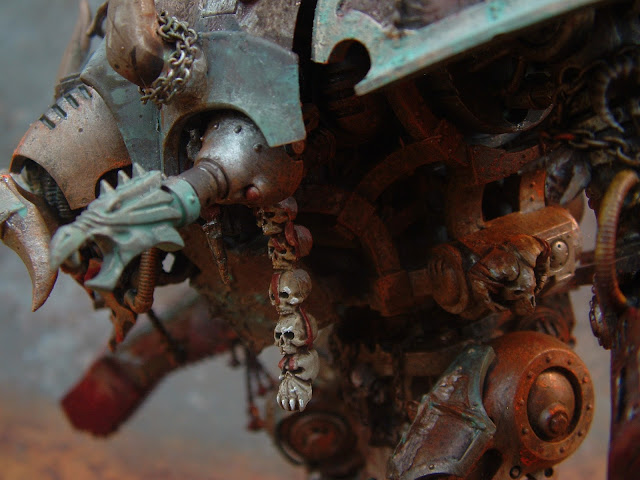 Spare not the heresy, spare not proposition... 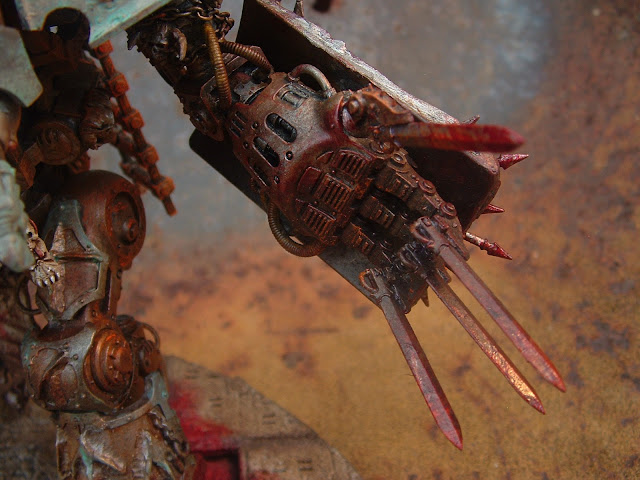 He was led by a score of lumbering beasts through a maze of twisted, shrieking corridors, such comprised his parody of home, into the harsh light of a daemonic sun and the familiar ring of a blood thirsty crowd. 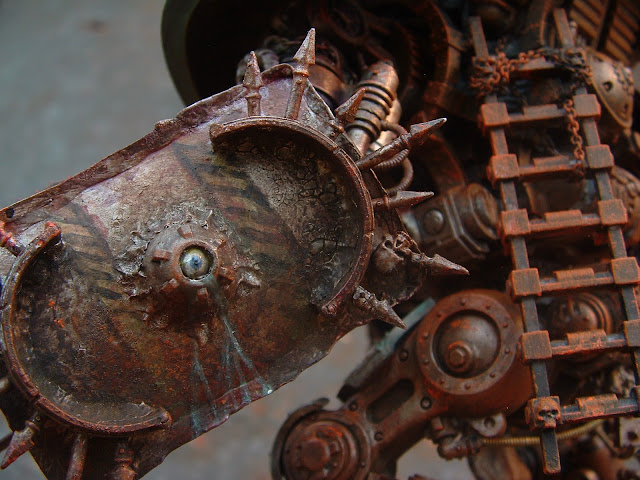 The channel that gazed out from his shield boss jittered and never focussed as it should have, but he could see the people, innumerable people lining the seats and staked to hanging racks; climbing over one another, desperate for a clearer view of the ensuing battle.
The next channel made him reel (inwardly, for neither one of his bodies could) at the sight before him, the opponent that the Despoiler had so kindly brought him. 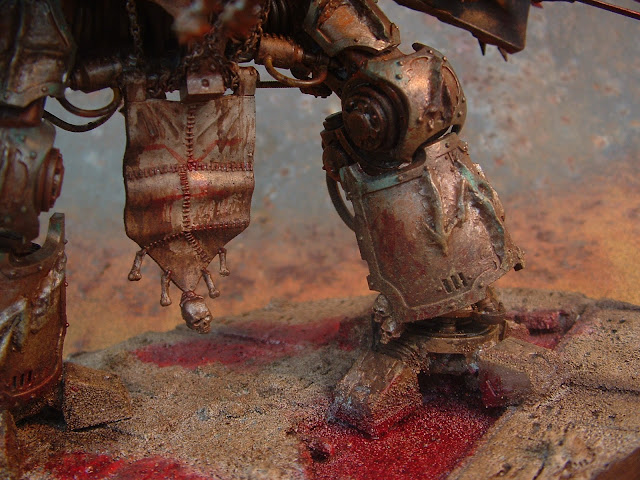 Unnatural long count of years had done much to dull his memory, but this silhouette before him... That battle cannon, the oddly familiar shrieking clatter of vengeance... but was it possible...?

After all this time... Separo? 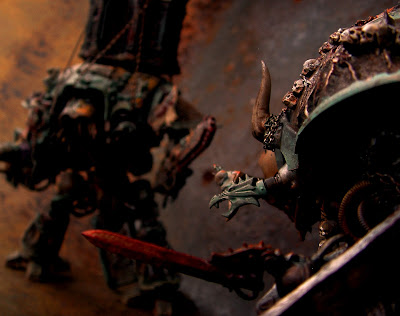 ...for Cog knows the doubter and victory awaits...

At last, Victory Awaits is finished, and by THRONE, this was a terrific experience!  Yeah, he's not quite finished-- there's a rocket pod, an icarus autocannon and another head to make, along with maybe a few finishing touches I found by taking photos, but other than that, I reckon he's done!  I so hope the client likes him as much as I do.

I'll be putting up a post with his work in progress shots later.

So, yeah.  Want anything built or painted?  Now one IK's just about off my chest I'm taking requests again!  Remember to check out my commissions website, and/or send me an email @ lonely.kitbasher@yahoo.com if Victory Awaits sparked your interest.

Bye bye for now, hope to see you soon!