Back again at last


I have been unfaithful to the blog, I'm sorry.  If you've been following me on G+ you'd see I haven't been entirely idle but still that's inexcusable.  I haven't been wanting to paint much because I haven't bought any new brushes recently, which is a terrible rut to get into; I did the other day and finished two more Astartes, so that's a thing I did.
As far as the IK is concerned, very slow. Almost no progress at all, but it's there in the background as an ongoing thing, which I wanted it for.  I finished the avenger gatling cannon arm; the barrels proved so heavy I was compelled to drive a brass rod straight through the weapon to brace it. 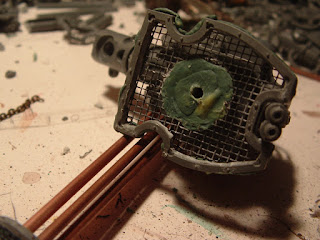 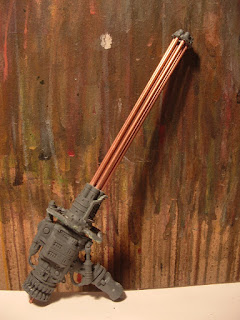 I'm also in the process of making a thunderstrike chainfist.  Yeah.  I haven't got it to a point where I can show it here yet but just so you know, it's a thing.

So here we are, two members more of Thollr 2nd Flokk Sigmundr. 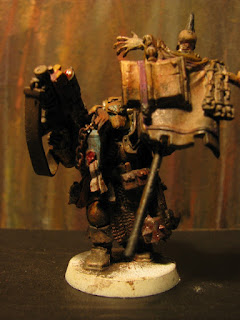 First is the flokk colour sergeant, who counts as the combat squad leader. 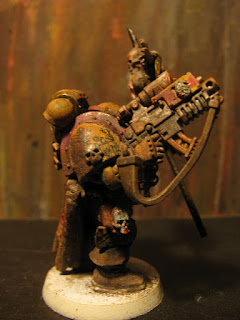 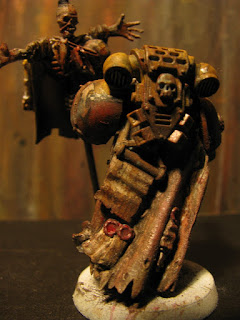 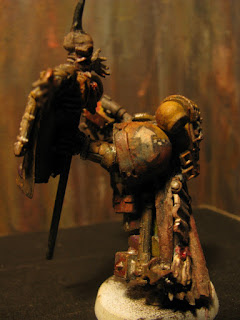 D'you remember the 3rd ed Warhammer box-art by John Blanche?  This one of the Black Templars.

Somewhere in the background is a red standard bearer, can you see him?  I liked this idea very much and, being Imperial Fist successors as the Black Templars are, I decided to incorporate red into the colour sergeant's livery.

Second is the musician, former Deathwatch Black Shield, Brother Anthem.  Being a fairly important character --in my opinion-- I wanted to put a bit more time into painting him; also I used more drybrushing and typhus corrosion to reflect his dark(er) backstory. 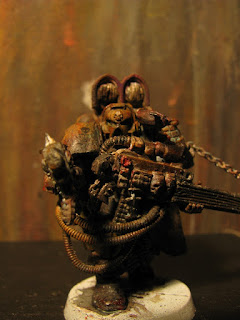 I chose a BA death company helm for its bulkier outline; I didn't realise they looked like headphones until later.  That's okay though. 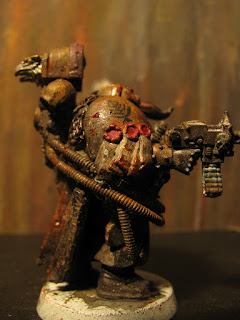 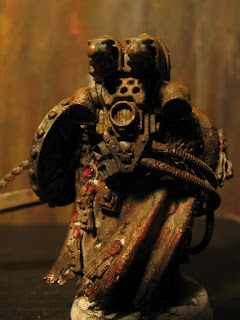 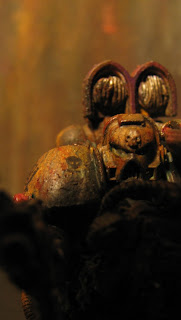 And that's that I suppose, for now anyway.  I've begun painting an assault weapon specialist and have many more half-finished space marines awaiting my attention.

Assembling/converting IK #2 part 1: Off to a slow start... 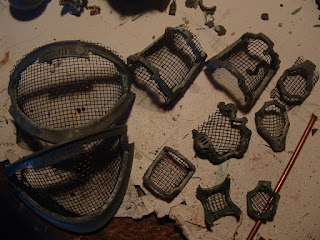 Well, we knew it wasn't going to be easy.  The cutting out of the armour panels is complete, the mesh is in place and I'm just waiting for the greenstuff to dry so I can begin trimming.  That's how I hold it on, by-the-by; greenstuff, super-glue and wearying heaven sore with my prayers.
Storm's teeth, hurricane fencing is so stressful, even in plastic!  I don't think I'll ever be buying a FW knight (foreshadowing?)  Someone said once that it was a thing, that kitbashers would dream up the most ludicrous of conversions and then set about to make them happen. 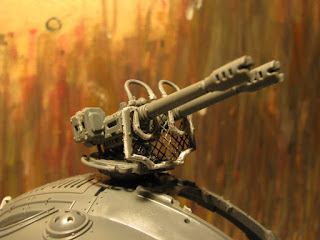 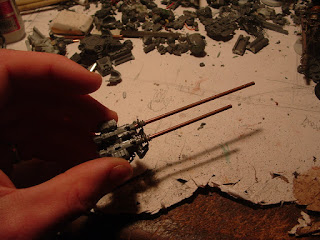 The front plate on the Icarus autocannon was probably the most difficult of all; I ended up actually cutting it in half in an attempt to prevent my nasty, fat fingers snapping it.  Extending the barrels was the next (obvious) step-- 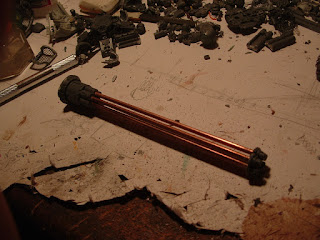 --along with the avenger gatling cannon.  Avenger?  Is that it's name?  Forgotten.
My elder brother tells me that if you carry around huge weapons, blades, swords or anything, then you're seen as lacking in other areas namely those of, of manliness-- oh well!  story of my life-- I'm a dhampir, and I'm happy with it. 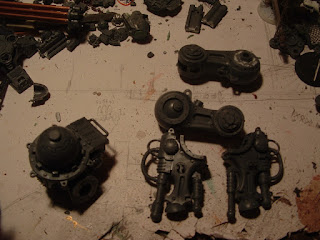 ...Er-hm, moving on, I was not going to pose the legs at first, but I've finally buckled and got out with the scrollsaw.  I think I'll be making a graveyard for the knight to be walking over, that'd be nice.  I'm looking at other people's freeblades for ideas; I rather like the awkward and disturbing poise of Atgos the Silent. 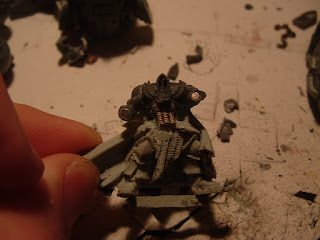 In other new I'm using the Khorne exalted champion to make a new body for my chapter master-- not that I ever finished him, but with the whole canon vs gaming scale thing it wouldn't have made sense to make him so small.  My only regret is now I have five pairs of sternguard legs I will never use... 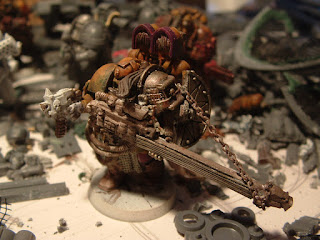 And 2nd flokk musician is currently in this Halfway-Through-Being-Painted state.  What you see behind him is my desk at the moment.  I've got several other (secret) projects that I'm not going to relate yet; oh, here's a fun game for you.  Looking back at the photos of the last few posts, can you guess what my secret project is?