My first (three) games which were amazing 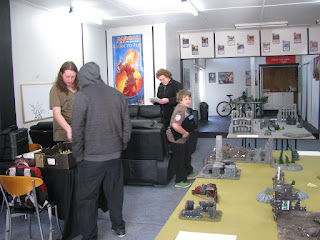 So that was that!  (the end of the day, not the post)  I arrived at 11:00 and got three games in before 6:00 a loss, a draw and a win.  Purge the Xenos seems quite a good scenario to begin with; simple obliteration-- I know, not quite that simple.
I think there were three games going at any one time; unfortunately I didn't really see what was going on elsewhere, I was a little tied up... 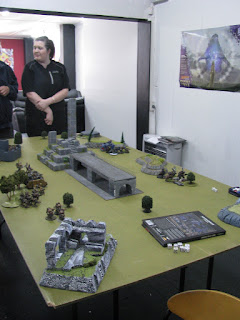 My First Ever Game was 1850 pts against Space Wolves, and got the most pictures because it had to be documented.  I had forgotten to write up my army list so there was about fifteen minutes of Frantick Calculating before the start; I let my opponent deploy first and still messed up, putting my devastators too far away for anything and sending my centurions after a knight paladin.

My chaplain was beaten down by two thunderwolves in an terrifying flurry of teeth and claws...
Come turn 3 I decided to call it; points were 10-1 in his favour and there was no way I could overcome that.  But it was terrible fun!  He didn't actually realise it was my first game, and he apologised, but there was no need to, really. 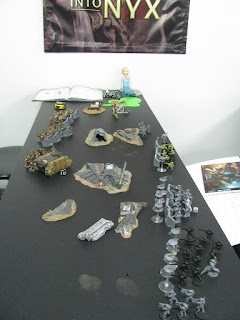 Second game was 750 pts against one of my best friend's Tau.  Unfortunately there was too much terrain for the size of the table and we didn't have the time to finish it and were tied 2-2.  But Throne, Lord Kleitos certainly showed his worth, even if he was too far away for close combat!  He hit everything he shot at and survived a 33-shot salvo of pulse rifles with a wound remaining! 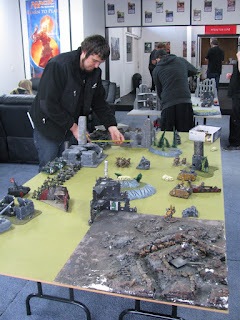 The last game of the day was against IG; a pack of witless guardsmen surrounded by armoured might that scared me... until I got my terminators into close combat.

I didn't know the two leman russ' were one unit; wounds carried on over to the next; I wrecked one and the other exploded.  My terminators suffered no loss.

I was so glad of successor chapter tactics.  REROLLS OF 1 FOR BOLTER WEAPONS TO HIT EVERYONE!  And I got a lot of ones.

Turn 3, the points were 3-1 in my favour.  My opponent was about to call it, but I egged for another turn so we carried on.  He got another victory point but I still won.

At the end there was prizes given out!  I came third and won a terminator librarian kit.  If I had gone up against Nathaniel's eldar it would have been a different story... Apparently his wraithknight blew his nose and an IK exploded...
Everyone at one point commented on my army, using words like "crazy" and "grim".  They were surprised to find I was a loyalist; Kleitos in particular, I think I had three people commenting on his "chaotic" look.  Don't they know that's just my style?
I also had a lot of interest in what I had for sale, my metal hive tyrant and kitbashed commisar in particular.  Nothing was bought but only because people didn't have the money on them at the time.  I got some numbers for possible commissions in the future, so that's exciting too.

So yeah, wow, what a day!  I wish I could go every Saturday, but packing my guys up every time is such a pain... I need to buy a carry-case.  A big one.

And that's that.  My first three games which were amazing. 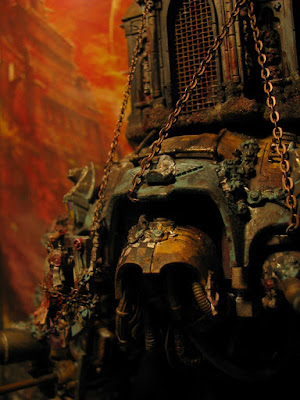 The White Rose, knight paladin of Lady Fransicique Alegrithi Banquo under loyalist house Silenzi, is finally finished after many, many weeks of labour.  Showcase time, everyone! 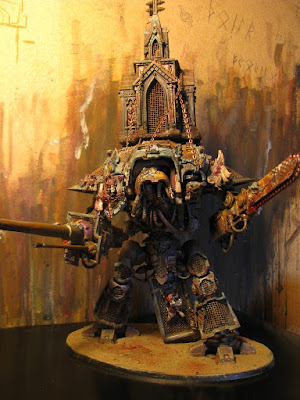 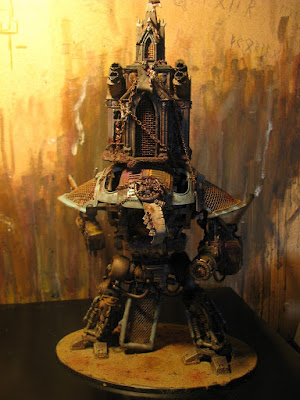 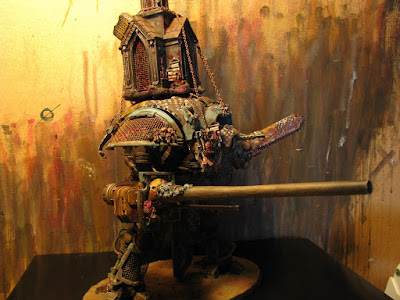 Throne of Earth, but it has been an incredible experience!  I learnt a good many new techniques with conversion and the tech paints-- I've quite fallen in love with some that I otherwise wouldn't have bought, Ryza rust for one, and martian ironearth. 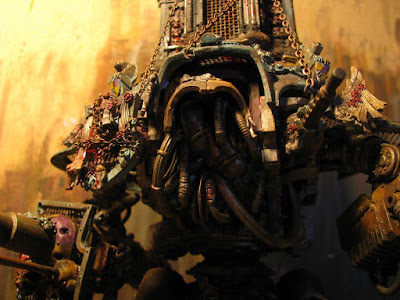 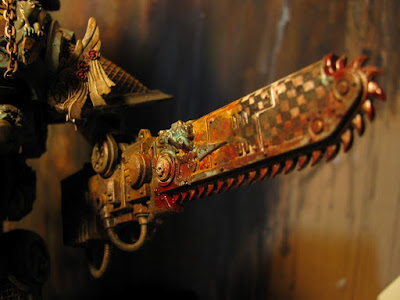 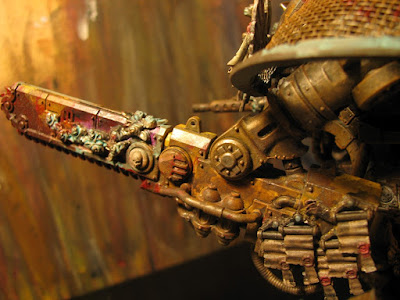 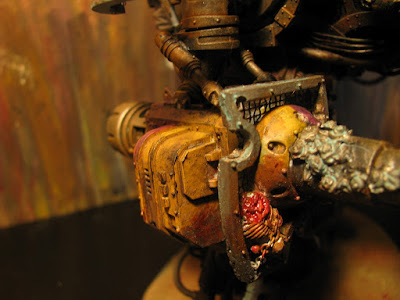 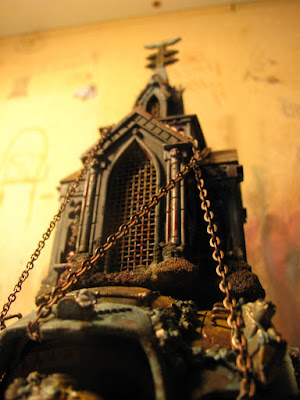 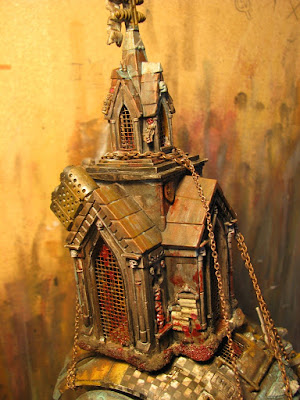 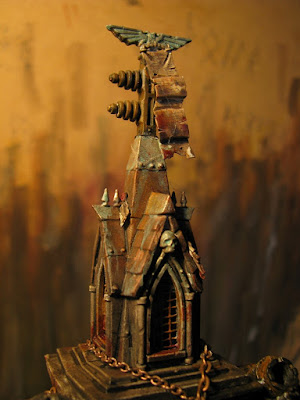 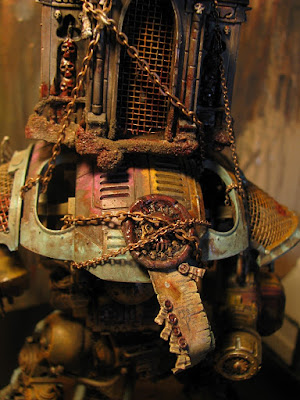 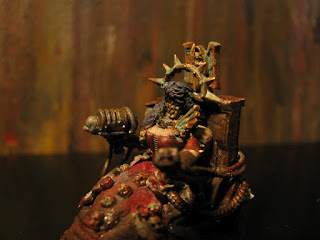 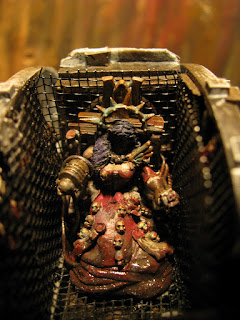 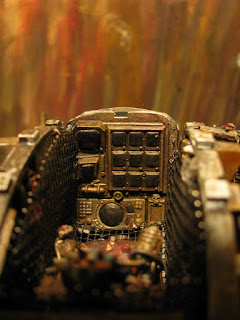 I have actually forgotten how long it's taken me, but know this, I DON'T CARE I'm still buzzing from it's completion.  A big thankyou to the 40k G+ community for the nice things said during this project-- twice I fell into depression, and twice I picked myself up and pushed on.

...Now I've finished that, what next, I wonder.  I should get on to finishing that razorback.  I suppose we'll have to wait and see, won't we?

First and foremost, where I'm up to with the white Rose.  I've begun on her chainblade arm among other things; the chapel is now undercoated and Lady banquo is seated inside. 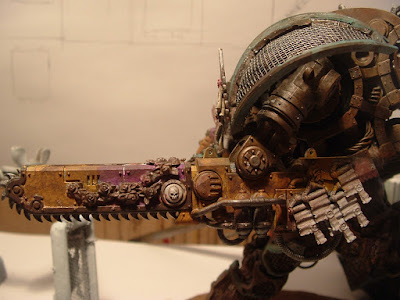 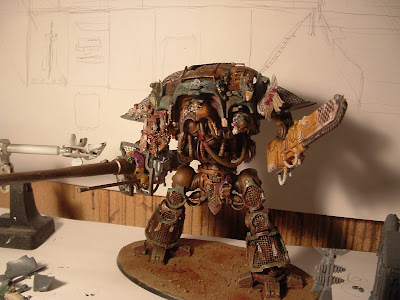 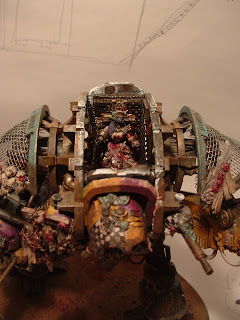 Oh, I'm so excited about finishing it!  How long has it been... I can't remember, but it's been a long journey anyway. 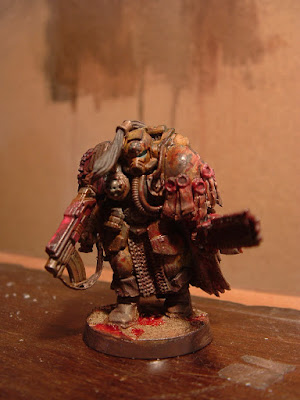 But observe; this morning I finished what I thought would be a member of the Sagodjur Fjorlag honour guard, the "morbid seven", using a WHFB chaos warrior as a base and the most classic pieces of equipment I could find.

A terminator pauldron on the one side and a vanguard veteran's on the other gives him a much more imposing silhouette that what I'm used to-- and I'm very happy with it indeed.
But it got me thinking, what if I made every one of my space marines like this? 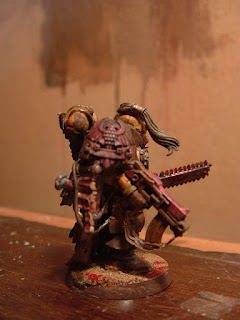 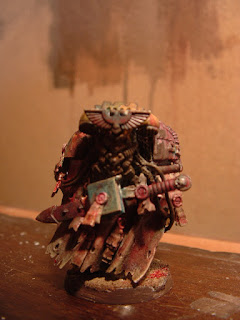 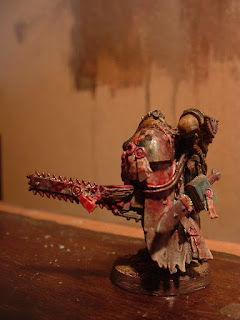 You see, in terms of scale it only seems right, does it not?  I think it does.  Also the fact that I wanted a Scandinavian-themed chapter without collecting the Sons of Russ-- with all due respect, they are far too mad for my liking.
So this I have decided; I will have two forces.  One is the "gaming pieces" where I will use thunderfire cannons and terminator squads and all manner of wargear the chapter canonically cannot use, and the "canon pieces", using the warriors of chaos.