QUICK NOTICE FIRSTLY:  The cut-off of the Astronomica "competition" will be extended to the 10th September.  Just so you know.  Alright, picture time!


***
Right, so my 4th IK and 2nd Cadmus knight and first resin kit is finished!  I never liked green before, but it's growing on me, you know? 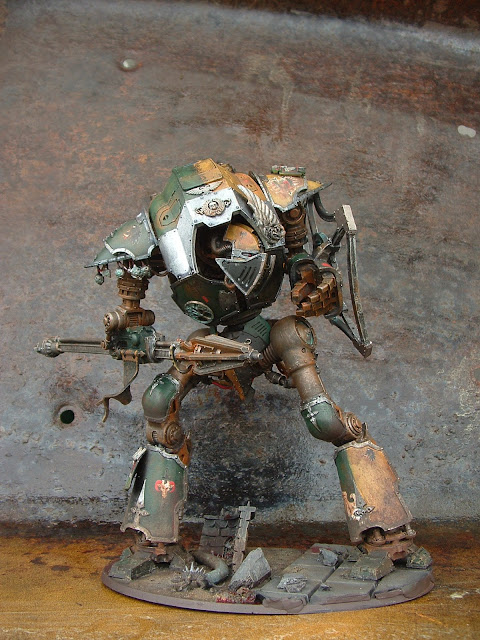 Lady Luci Ann, knight lancer of house Cadmus, and I must say she's quite elegant to be sure. 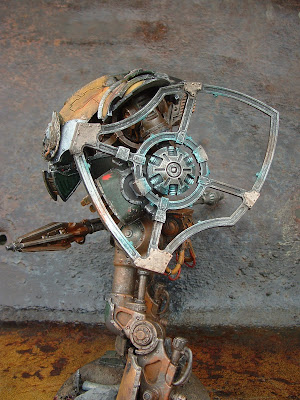 There was a shield involved... I couldn't help myself, I had to put it the "right" way up. 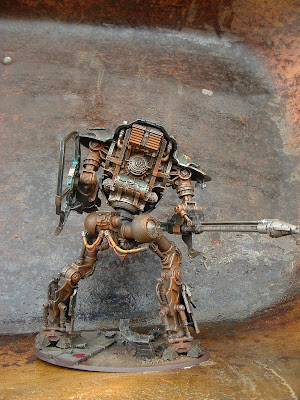 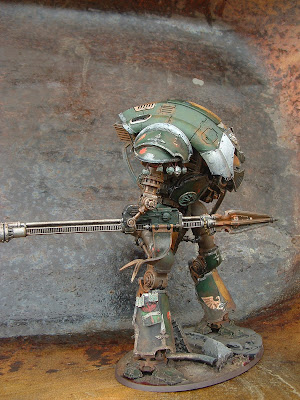 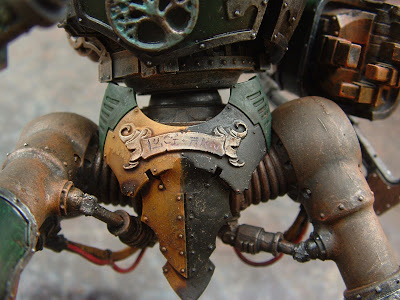 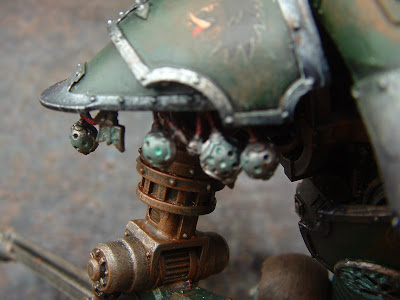 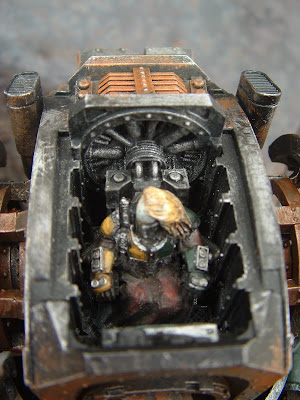 And here she is, lady Ann herself.  It's an odd thing that two of three interiors I've decorated so far have had female pilots (the third being a summoner). 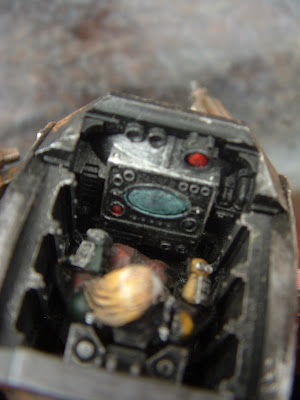 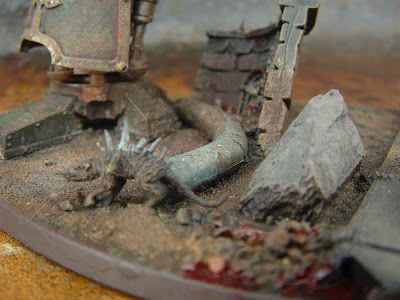 Also, along with the Lancer, a dark figure appears...  Yes, I got a second shot a Cypher too! 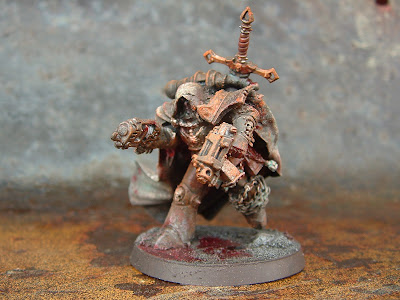 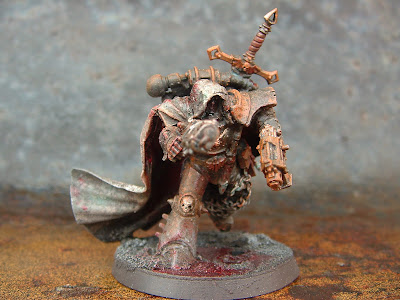 I used my tried and true tin cape recipe, and a paint scheme with so many steps I've sort of forgotten what I used... whoops. 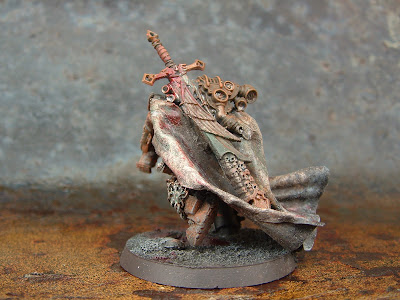 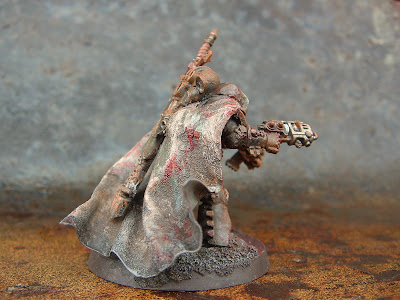 So there we are!  This is why I've been neglecting my blog for so long.  Partially.  I'm still up for taking commissions if you're interested, remember that!  Just flick me an email @ lonely.kitbasher@yahoo.com.

RIGHT!  Last post was a wall of text: Today is a photo gallery to make up!  I was rummaging through the deepest depths of my study; I was trying to find a piece of black paper to use for a backdrop, when I came across a box of old, embarrassing art from way back-- I mean WAY back, like 2013 odd.  Once again, hardly related (I'm sorry) to Warhammer in the strictest sense of the word, there's a bit there you might find interesting.


Let's start with possibly the oldest piece I've got: the date says 2000, I suppose I was 4.  This was a Sunday school piece, if the memory serves, and it was meant to be Satan.  Foreshadowing of a future in the grimdark...?

UNORGANISED BLOCK Let's just get this out of the way

Skipping a few years to the close of a Sonic the Hedgehog phase that lasted from 2000-ish to about 2012... I had a plethora of ridiculous OCs, but I destroyed them all, thank heaven; a decade of drawing Sonic meant an alarming amount of confidence in drawing someone else's licensed character.

Wow, that'll help me in the future.

Note Tails the psyker in the top right.


I had a bit of a LEGO story going at one point.  This chap I remember was basically the Story Breaker character, pretty much the god of the world.

Oh, you'll note the signature may fluctuate between an odd "DIGGER" which was my old pen-name, and the symbol you'll see on more recent artwork.  I was signing my name as "DIGGER" since I was seven, and old habits are hard to break.

Look, it's Baman and Piderman.  I know the colours aren't shit per se, but look at the structure-- LOOK AT IT.
BLOODY LOOK AT IT.  I think I know who I was taking inspiration from at that point, which explains a lot.


High fantasy was a big thing back then too.  Maybe a bit too high... those swords look kind of extravagant.  Also armour, I didn't know how armour worked back then.

And yes, I had-- still have, I guess-- a story based on Dragon Ball. 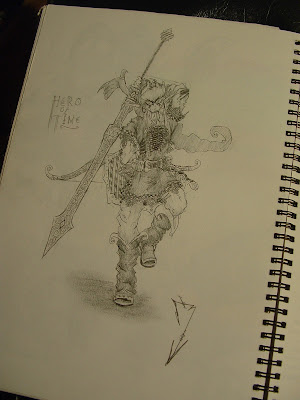 First, here's one of Link.  I suppose you can't call yourself an artist nowadays if you haven't drawn Link. 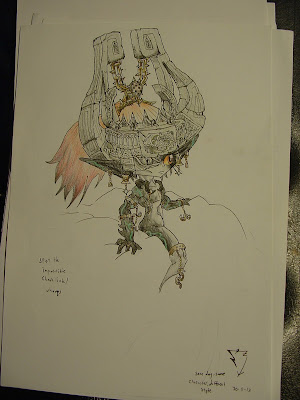 I also came across a few pictures of what appeared to be my favorite character at that time. 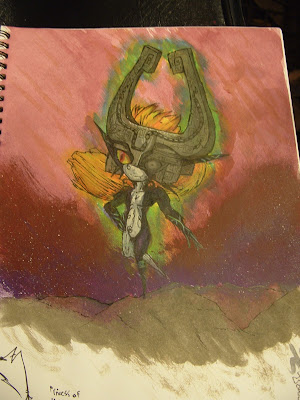 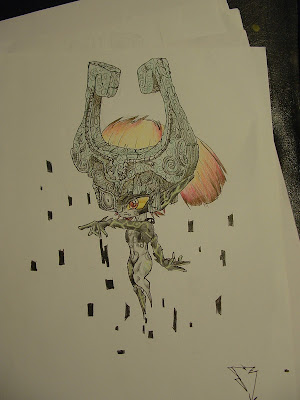 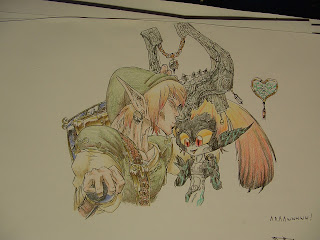 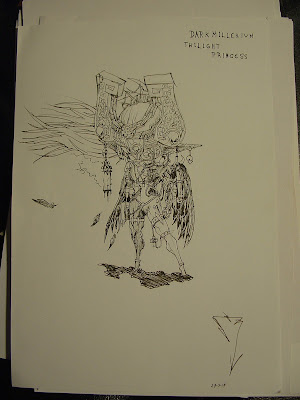 CLEARLY I HAD AN OBSESSION


Here's the first picture of a space marine I ever ever drew. Just getting into the hobby I was, and I knew right from the start I was going to make my own Chapter... bad foot to start on when one knows so little of the lore, I know right?
Also, don't read his description.  That's not a scouter on his eye at all.  No it isn't.

Nnnggg... the closer you look, the more wrong it looks.


Here's the original version of my Chapter master; he was called Wuotan back then, but he was... a bit different back then. 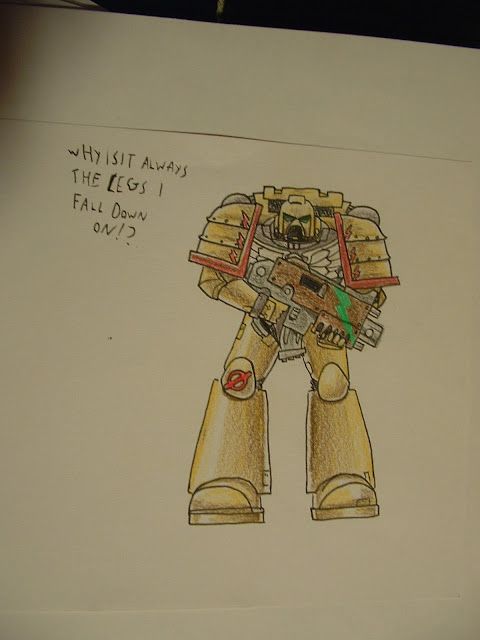 God, I hated myself back then.


I found a couple of pictures of miniatures I either had or was planning on getting, like this one, the finecast techmarine.  Note the 6th ed points coat in pencil up top, and the appropriate comment.


Ah, I was obsessed with this fellow.  I did get him in the end, and I was still obsessed... until a few years later, and he was... sort of cut up for another chap...


As far as related artwork goes, there was quite a but, but here are some of the less embarrassing pieces.
Now, here we see a prime example of a common hole I would dig myself into; spending hours and hours on the pen of a drawing and realising I was too lazy to colour it in! 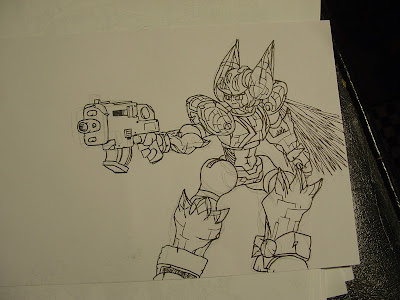 40K sort of seeped into everything else I drew... here's a Megaman OC with a blaster that's entirely original and not stolen. 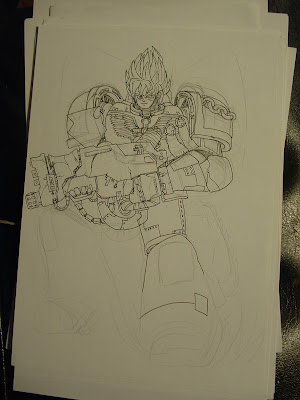 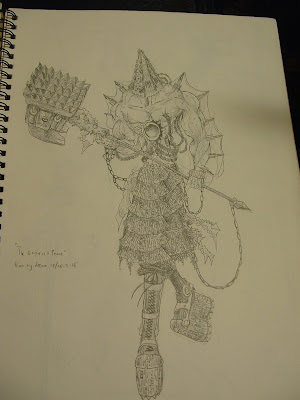 Ah, a slightly more recent one; the original the Emperor's Peace.  I still remember the nightmare I saw him in, I was getting chased down a maze of corridors 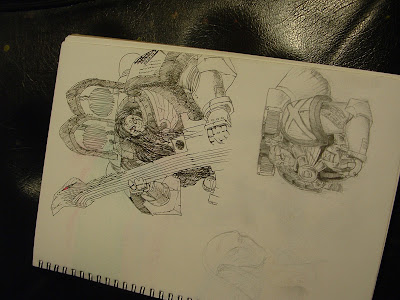 That one didn't rotate. 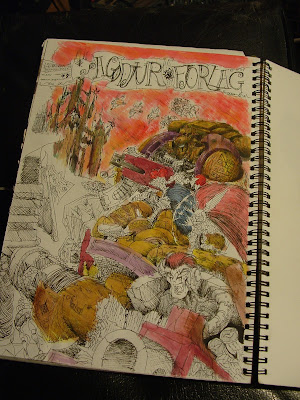 A shame I didn't finish this one.

***
Okay, too much old art is bad for me.  I'm losing faith in my ability.  I need to go finds some recent stuff to remind me that I don't suck at drawing. 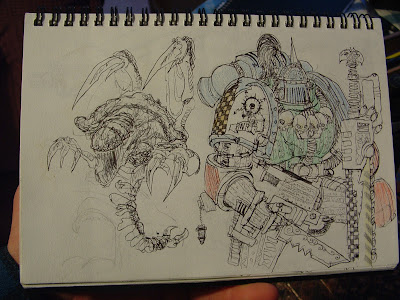 This was from another dream.  It was set out like a Michael Bay film, with tyranids attacking an island resort. 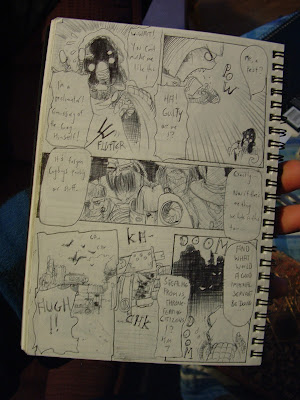 A page from a comic... not a serious project at all. 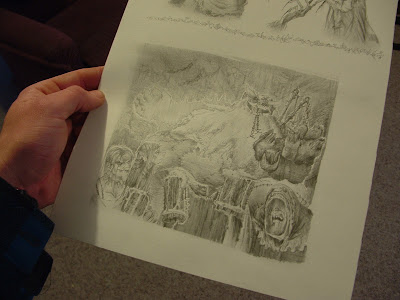 And finally, and most recently completed, an illustration for a dark fantasy novel I've recently finished writing.  That's better.

I believe my second email address has been plugged into a comedy machine.  In the last three days I've got two emails sent straight into the spam folder; not possessing any other way of presenting both at once, I'll slap them on the blog and call it a post.  Not exactly the usual content, sorry, but here we are.

I'll print them in full below, spelling mistakes and all (which I think I'll underline).  Get ready for some heavy reading.

Our Operation Manager has extract your 1st payment of $5,000.00 out of your total fund of ($1.5million) We need your full information for the transfer,

We scheduled installmental sums of USD$5,000.00 daily through the cash fast Western Union, payment at counter as directed and we have commenced the relevant programming and the documentations of the said fund, as we are instructed to make the first payment of USD$5,000.00 MTCN available in your name upon the receipt of your information from you as follows.

Contact our Operational Manager,Mr WETAYEM MYSHEAR  through our office email  for more enlightenment on your money.

Well now, that was interesting.


Here's the second one, from three days later.

Dear GOD Elect,
It's my pleasure to have contact with you, based on the critical condition I find mine self, though, it's not financial problem, but my health, you might have know that cancer is not what to talk home about, though I don't know you, and my contact with you  was not by mistake, but by devine favour of GOD.

I am married to Mr. Mohammed  Ibrahim who worked with Tunisia embassy in Burkina Faso for nine years before he died in the year 2008.We were married for eleven years without a child. He died after a brief illness that lasted for five days.

Since his death I decided not to remarry, When my late husband was alive he deposited the sum of US$ 2.2m(two million two hundred thousand dollars)in a bank in Ouagadougou the capital city of Burkina Faso in west Africa Presently this money is still in bank. He made this money available for exportation of Gold from Burkina Faso mining. Recently, My Doctor told me that I don't have much time to live because of the cancer problem,
Please Reply to this Email Id:( mrssabahibrahim007@gmail.com)

Having known my condition I decided to hand you over this money to take care of the less-privileged people, you will utilize this money the way I am going to instruct herein. I want you to take 30 Percent of the total money for your personal use While 70% of the money will go to charity" people and helping the orphanage.


I don't want my husband's efforts to be used by the Government. I grew up as an Orphan and I don't have anybody as my family member, just to endeavour that the name of GOD is maintained. Am doing this so that GOD will forgive my sins and accept my soul because this sickness has suffered me so much.

As soon as I receive your reply I shall give you the contact of the bank in Burkina Faso and I will send authority letter that will prove you the present beneficiary of the money in the bank that is if you assure me that you will act accordingly as I Stated herein. Hoping to receive your reply.

Well, Mrs imaginary Ibrahim, you have my imaginary sympathies.  I can't really accept your imaginary money though, my imaginary bank account won't accept imaginary US$, especially from imaginary Africa.  You never know, it might have been imaginarily stolen.
And why would an email be signed off as "written from hospital"?  Is this some kind of west African mobile device, like the "sent from my lawnmower" sort of vein?

Well now, so not only am I a major businessman, I'm also an Apostle.  Quite an exciting thought, really!  But seriously, if I get any more spam I'm going to have to sort it out.  If you've had any the same or similar, I'd be interested to know.