Showing off my painted force 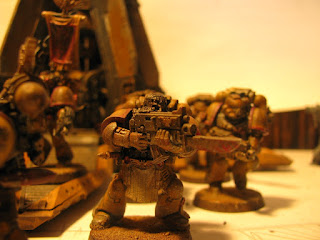 I have a 1850 point army to assemble by mid-July for my first 40k game ever.  Okay, I've gone and said it now haven't I?
THE LONELY KITBASHER HAS NEVER PLAYED 40K IN HIS LIFE
So I was going through my painted force to see what I've got, and I found two things; firstly, I don't have many, and where was I going with this...

But I want to say this first:  listen, a G+ acquaintance Henry South has bought a Forge World Warlord titan, currently the biggest resin kit produced.  He has begun a blog for this monumental undertaking and it is really worth following.  Right now he's in the preparation stage and excitement is mounting.


I built this squad with the drop pod in mind; I wanted them to look as if they were bursting out the second the doors slammed down.

The rhino suits the more static nature of the devastators, at least I think so.

I love my assault marines too much; I haven't seen whether or not they're actually effective in the new codex update but I certainly pray the Emperor they are.


The choir currently counts as vangard veterans without jump packs until I make some suitable rules. 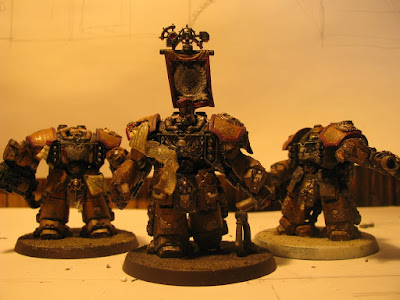 The centurions are not actually canonically correct for my Chapter but they're too good to be ignored.  I also have some "non-canonical" terminators which I forgot to photograph.

The librarius is a big part of my chapter and it's something I hope to expand in the future; 'specially with the apocalypse formation "brotherhood of psykers". 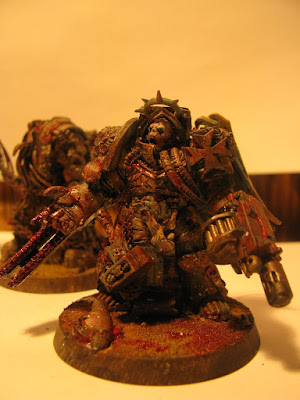 1st lord Klatos is the crown jewel of my collection and so far my most favorite piece... perhaps until I finish 3rd lord Baldr.
Oh, I forgot to photograph my stormtalon.  Never mind, if you go through my blog photos you'll find it.

So you see, there isn't much to see-- I haven't calculated points yet, but I'm sure it isn't quite 1850 yet.
And that's that.  My painted space marine force.

And a most general hobby update 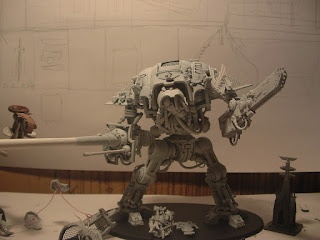 This I believe will be my last post for at least a good while I'm sure; painting has begun on the white rose and she is demanding much of my hobby time.  This may be the first big project I actually finish, and I must say, it is exciting.


ALSO my GW order arrived to-day-- yesterday, actually-- I find more excitement in ordering from my local and driving in to pick it up, even if it does cost more.  I bought two technical paints... 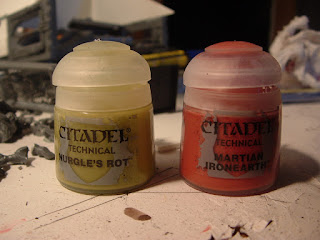 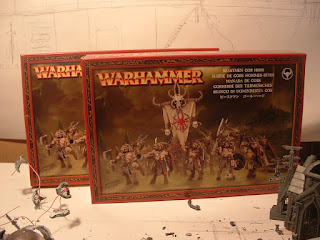 ...and two beastmen gor herds.  'twas a little foolish, I'm sure, but this is going to be my long-term project... Very-Long-term... as in, Second-To-The-Thunderhawk-Long-Term.  With the shameful shamblers I got last time I will be building up a great herd of Nurgley beastmen.

This is the first time I ever sculpted chain-mail loincloth; it ended up more of a mangy pelt than anything, my tool must be too big.

And that's it.  A most general hobby update indeed.

Seal of the collegia titanica

All sorts has happened recently, many things other than the hobby, which is a very good thing but I don't update as often.  Why did I bring this up?
Anyway, observe this that I found while looking about for images of titan battles.  This is why they called it Epic 40K-- unfortunately the word has come to mean a great deal less than it did even back then. 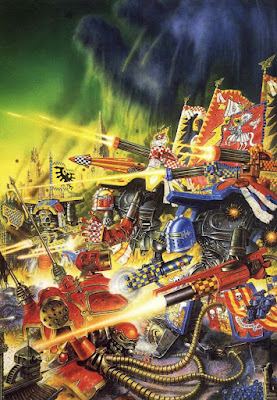 I'm led to believe they're Warlord-class, which makes it all the more spectacular... Reminds me of that scene in the Hobbit film where the mountains rose up and fought with each other.
BUT observe the fellow on the far right.  D'you see the enormous purity seal chained to his hull?  This seemed to be a common thing in the days of Epic 40k, and was dropt when Forge World produced the miniature.  I'm not at all sure on the story behind the titanic purity seal-- and would be very glad of any information-- but I decided to make one for my Imperial knight. 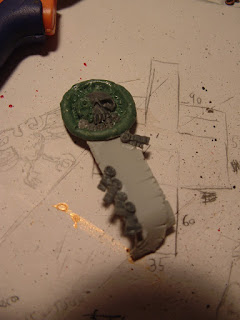 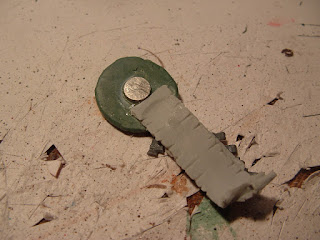 I hunted around for a nice, large, classic-styled skull to work from; the chaos terminator kit had a shoulder pad that suited when chopped up.  I tried to replicate the pseudo-writing the classic Grey Knights had sculpted into their armour, and added a few more skulls because Imperium.
The piece of cloth/parchment is obviously the master of marches scroll, which I decorated with GK purity seals.
It was all very fragile, so instead of gluing it to the knight I will magnetise it, along with the chains. 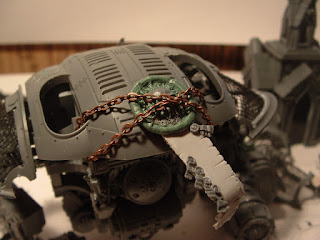 The chains are a little too meaty, but oh well.
And that's that.  The seal of the Collegia Titanica.

Assembling/converting an imperial knight part 3: persevering despite the darkness 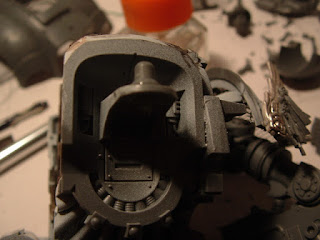 I have been recovering from a sudden bout of depression this last while; it would have been much harder were it not for the people on the G+ 40K community; their work and the nice things they said brought me out of-- of Dorn's Darkness, and I am better for it.
In hindsight I'm actually quite glad of the darkness, for in such a time (which is often) my painting style darkens considerably, and I do things that normally I would not consider doing with my miniatures-- such as this; 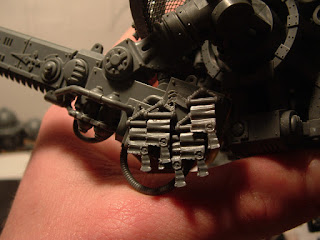 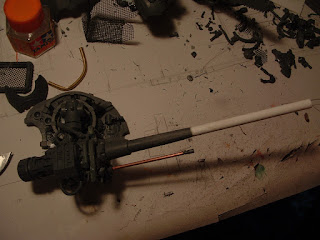 Does this happen to anybody else, I wonder?
I also didn't take any progress photos while possessed with the darkness, so this is more an showcase of the aftermath.  Here, I have finished the interior. 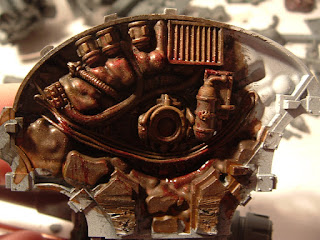 The lady Banquo, also is finished, and I really surprised myself with the utter horror in the painting. This is what I'll be using in place of a-- a-- what d'you call it, a banner.  Two pieces of sprue I believe from the old assault squad kit have been glued together with a piece of hurricane fence between.  I think I'll just hang a body off it or something similar...

And that's it, I suppose.  Although Dorn's Darkness has its benefits it ruins family life, so I'm happy to be better now.