A fellow G+ wargamer asked how I made capes and cloth out of tin, and I thought it'd be a good time to put up a tutorial on the subject, just to have on the blog in case. 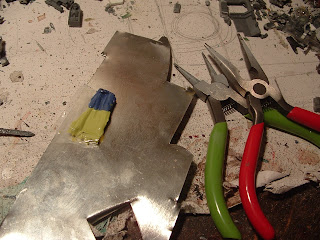 You're going to need a bit of tin first, and an old pair of scissors to cut it with-- be careful what you choose, you'll need something that both paint and your glue can stick to.  Some commercial tins are coated in... odd things that repel them.
Two pairs of pliers aren't a necessity, but the one you do have MUST be needle-nosed; that's the round ones (with the green handle in the photo).  And greenstuff of course.

And a file.  You're going to need a file too. 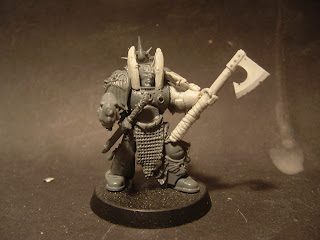 You'll also want a suitable candidate for the cape.  I'll be making one for this Angels Encarmine sergeant. 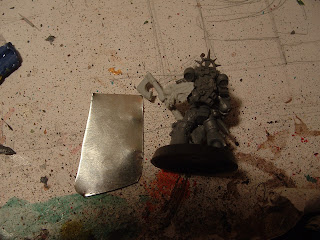 First and foremost, I want to stress this one fact; This Is Art, and art is representative.  You don't have to make the cape exactly cape-shaped, it'll be far too much hassle to bend about afterwards.

Anyway, cut out your general shape from the tin, making sure you've got a bit extra to work with on the top edge.  If you like you can make a paper pattern and fold it around the character to give you a good idea how big and such.  Nothing too strict here, except for making it wider at the bottom than at the top. 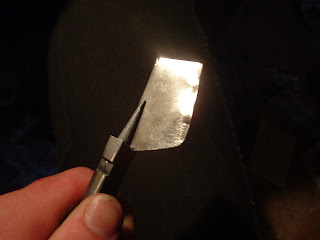 Right, now I've tried explaining this in the past to someone and failed, so please bear with me..
Clamp the tin with the pliers, at an ever-so-slight angle to the side of the shape, and bend it one way. 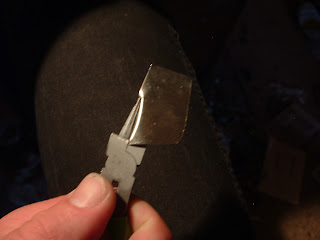 Like this.  Move the pliers along a bit, and bend the opposite way.  Do you see now why the pliers needed to be round? 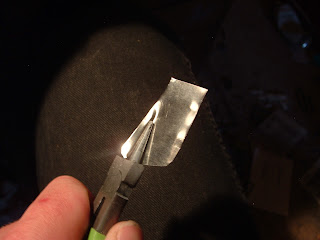 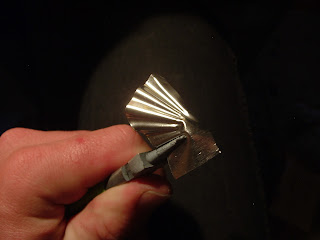 Because the pliers are tapered (at least, they should be) the resulting creases will fan out.  Try to make them irregular, over-bending one or two for variety. 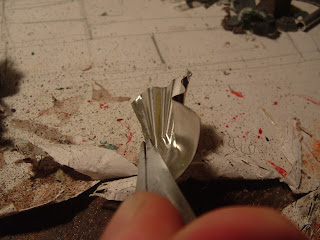 This was tricky to photograph.  Taking the other pliers (optional) bend a tiny bit of the side edge inwards, for a round edge and also to give the suggestion of volume to the cloth. 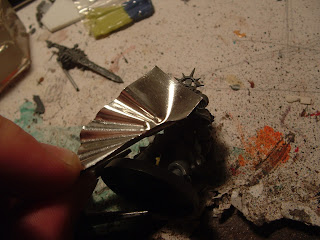 Check often with the miniature and ask if the cape looks alright. 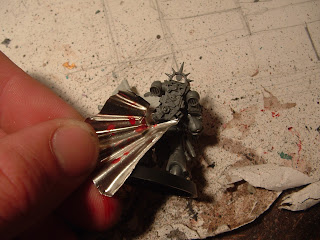 Once he's happy with it-- and you are too-- you can cut away the extra on top; if the client has a backpack, cut a rough hole to accommodate it.  You don't need to make the gap perfect, as you'll be filing it in with greenstuff later.
Try not to bleed all over the tin, it's a pain to wash off and paint won't hold to it. 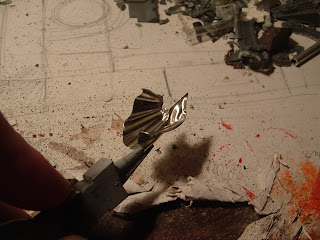 Continue bending the folds around... 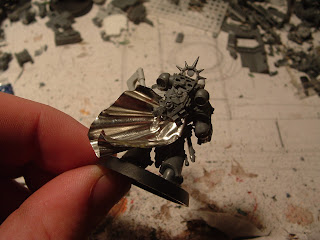 Keep fitting it to the miniature and tweak accordingly, bending here and there.  The main thing is not to be worried about messing it up or making it too small; extra can be taken off, but not the opposite... 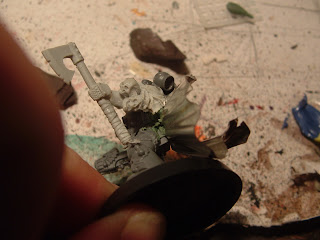 Another tricky angle.  Here, you're firstly going to want to fill in the gap between body and cape with greenstuff, for stability purposes.  once that's done, fill in the spaces between shoulder and cloth, and also the rough patch under the backpack. 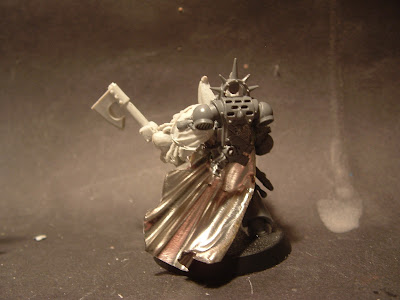 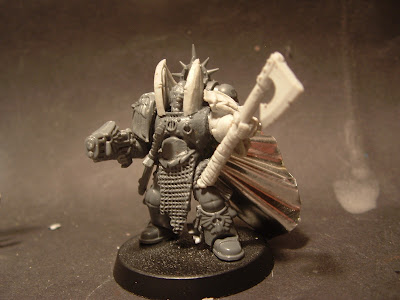 And your cape is finished!  You might want to add some buckles or a bit of twisted floral wire for cord at the front to show how its being worn.  Now you just have to finish the sergeant.

I MIGHT WARN YOU that the paint will wear off the edges and leave bare tin, unless you layer your choice of sealant very thickly along the edge.  This is one reason I like to weather my capes. 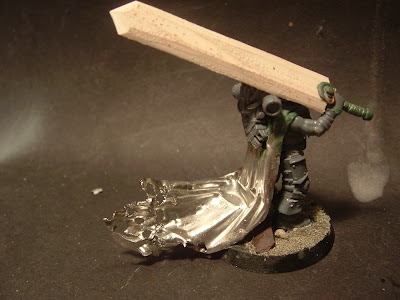 If you want the ragged cloake look, clamp the cape to a bit of cedar or another soft wood (before you bend it) and hit it with the drill press, running along the bottom edge and up the sides a bit.  Twist it around and there we are.

So that's that!  How to make a cape quickly and effectively.  Using this technique you can make tabards and extra draperies; combining it with my bunches of purity seals tutorial (I really have to put the tutorials together at some point) you could even make large sheets of literature, banners... all sorts!

Well, it wasn't the most expensive kitbash I've done, but it was certainly the most intense.  Who'd have thought the canoness would be finecast?  Throne, but I've finished her now and painting was a complete joy. 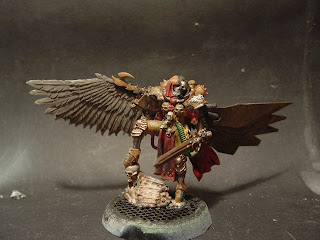 Part 1, assembly (and a whole lot of other things) can be found here. 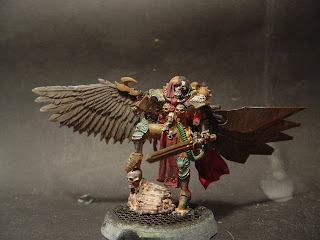 And here we are! quite pleased with how she's turned out --when am I not?  No, this one in particular I'm very very happy with, almost as much as when I finished my mascot. 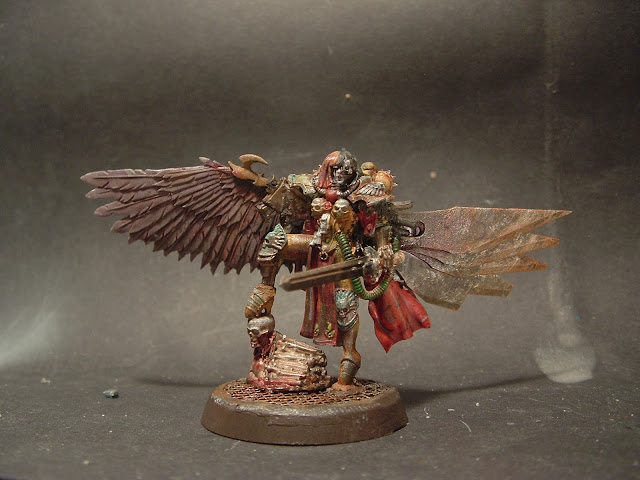 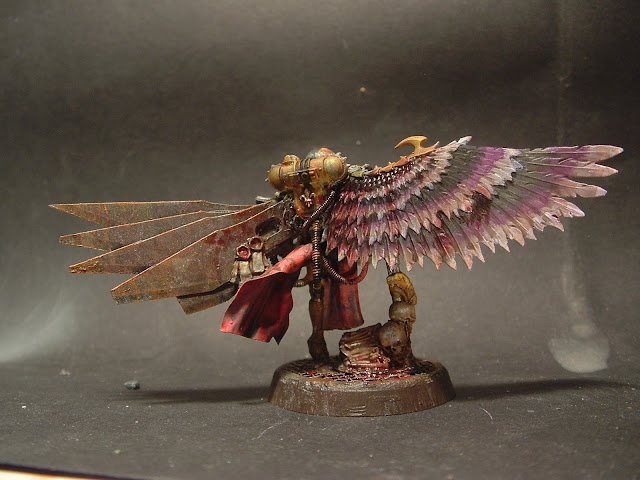 Obligatory photo with blog mascot, Alone with a Dream himself: 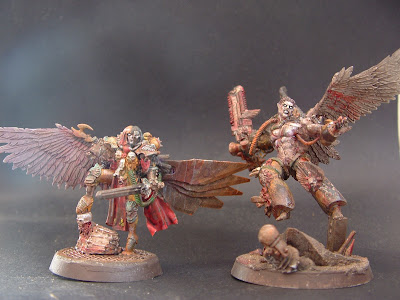 And lastly, a reminder of the character I based the kitbash on:

So that's that!  What drove me to make a perfectly good canoness into something like this?

Because I could XD

I've wanted to thank you in some way, but as you're so far away I'll just write a thank-you in this blog post for others to read.  Your artwork and your style has been a great influence to me over the years, even outside of the wargaming hobby, and I wanted to thank you for being yourself.  Thank you for not listening to your art lecturers (more or less) and pursuing your dark visions; if it wasn't for you, I doubt Warhammer would be anywhere near where it is now, you know. 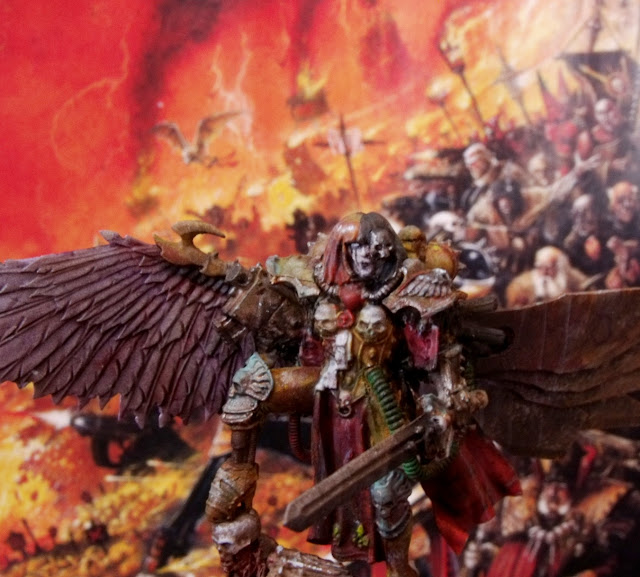 
Hurrah!  That took a while, but what a surprising finish!  I learned a lot while painting these guys-- for one, gold needs to be shaded with druchii violet, otherwise it turns anything into a Christmas ornament. 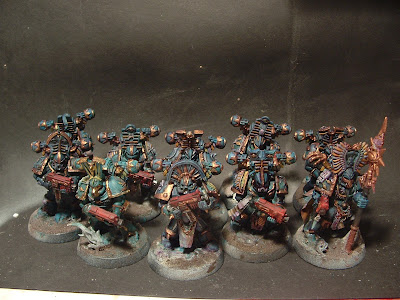 Here they are,  with minor weathering... 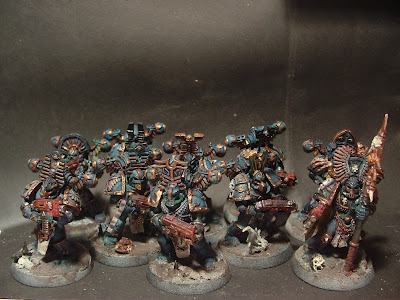 Slightly more weathering...  Still not really a fan of the sculpts though.  I don't mind this one, though. 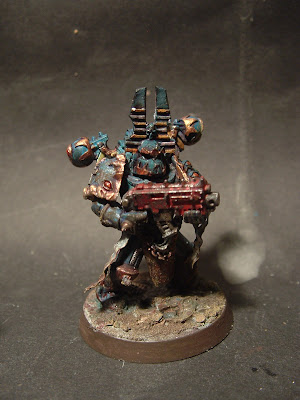 ...Said the as-yet undiagnosed furry.
Weathering sotek green was certainly a strange experience, I'm not used to the cooler palette.


So here they are, ready for inspection.  Aspiring sorcerer with the first combat squad; 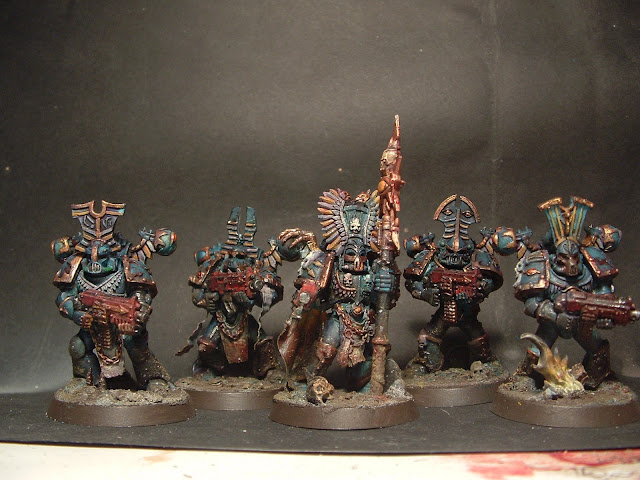 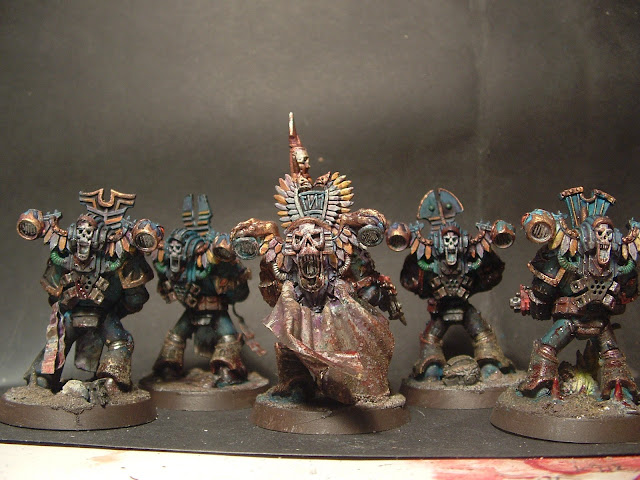 And surprised Jeff with the second. 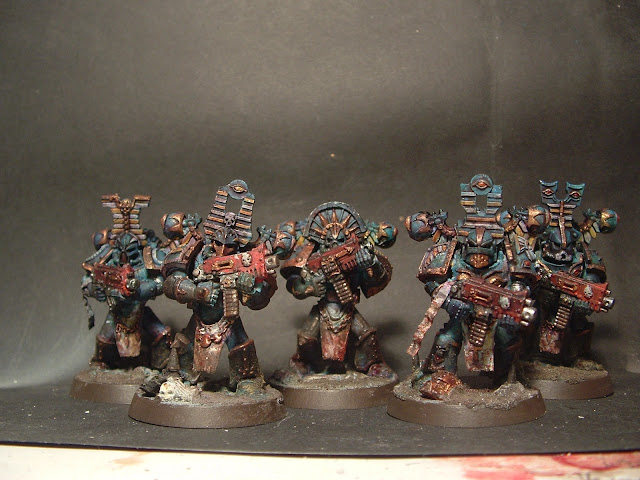 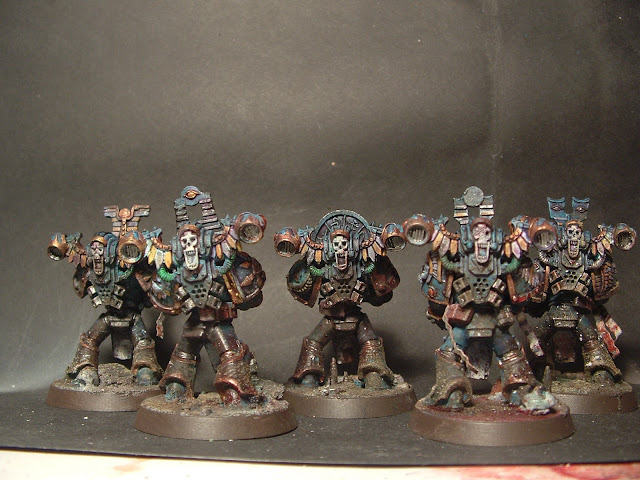 So that's that!  Just a few bits here and there to touch up, and the parchment needs text yet, but other than that, we're done!

P.S:  On a side-note, the client read my last blog post... and I learned very quickly not to publicly roast the client's decisions.  I'd like to say sorry for my harshness/silliness; still, 3rd party is 3rd party, not something I'd want to work with every day.  GW for the win.
Posted by D at 18:34 2 comments: