General hobby update: re-basing and some other things

To-day has been a bit busy; I'm taking my motorcycle all the way to Christchurch to-morrow, and though I'm only staying overnight I'm going to be terrible burned out for a while afterwards, so I'm throwing together a random lot of things on my desk for you to look at. 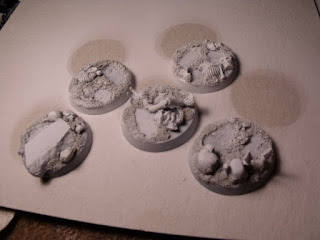 Firstly, I had to re-base my finished Astartes.  The system I'm using is thus; super-glue around the litter, sand over the top and another layer or two repeated.  It's not much but I don't really want the base to be too busy.  They have to be undercoated (previously I was using washes to colour the sand) and this is why re-basing was necessary.  But it's done now. 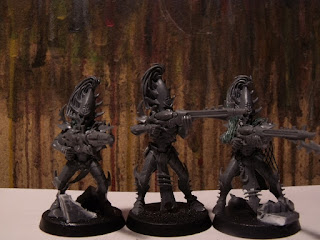 Three kabalite warriors assembled, seventeen more to go...  I thought it would look different and strange if you could see their faces but not those of the wytches.  It also means I need to get more dark elf kits, which is fine.
Here's a little banner bearer made with a Watcher in the Dark.  He has genestealer claws for toes and a dragon snout poking out the end of his hood.  How cute.
The eagle's wingses need a bit of feathering but I'll do that later. 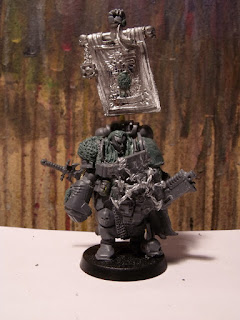 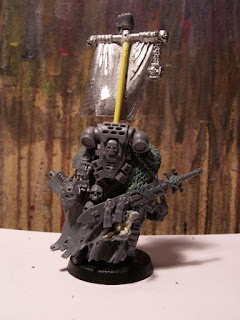 Finally, a WiP Thollr sergeant, with power fist and combat shield-- and the rest of his wargear.  The banner was kindly given me by G+ acquaintance Sebastian (thanks again by the way!) it's too heavy to magnetise so I drilled right through the backpack and used a piece of wire; this way it can still pop out for painting/storage.

And that's that.  A lot of random things.  Better go get my backpack ready; six hours ride to Christchurch tomorrow, Throne and fate-willing.  Bye-bye for now.

The plastic wracks are amazing.  Really, they are; I bought them for converting into SM scouts and got very, very distracted looking at how intricate everything is.  And just as well too, seeing as they're sixty-four dollars...  I have considered collecting Dark Eldar for a while now, but haven't really made any decision.  They're a fragile race, quite literally-- I would have great trouble with my nasty, fat fingers to put anything together.  And isn't DE really more of a girl's army?  The only people I know of who collect them are girls, at least.

Then a few nights ago I had an odd dream.  I was having to escape somewhere with a group of people I remembered as being friends, but they had been mutated horribly and were as diseased as plaguebearers.  I myself had a hand stuck full of syringes and couldn't move my arm at all.  We were armed with scalpels and bits of framework off some kind of bed and were running through endless hallways that for a moment looked like a freezing works with racks and racks of oven tray-looking things; I pulled one out and it was full of foetuses, frozen in place and all full of needles.
Can't remember the rest but that was what stuck out in my head the most.  I remember feeling very disturbed, a feeling I had to put into my miniatures but not my Space Marines... 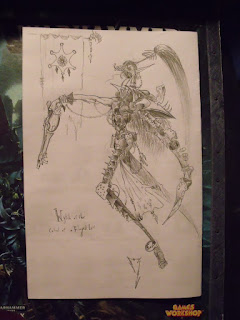 So... Dark Eldar?  will it be a thing?  They're lightning-fast but not very strong with kabalite warriors being 9 pts each without modifiers.  They're more into lots of presicion strikes than one bludgeoning blow like the Imperium.  Not so much conversion work to be had in them either, but I went for it and made a test model anyway. 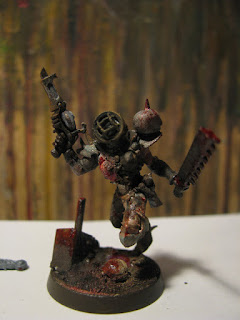 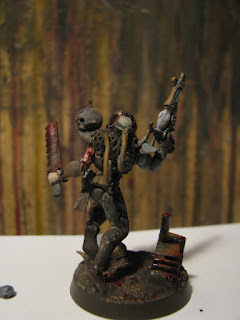 The Cabal of A Flayed Lust.  They are a great band of pirates who live far below the deepest reaches of the Dark City, raiding noble houses through the sewer systems and breeding/creating hideous creatures to guard their kingdom when they leave for realspace raids. 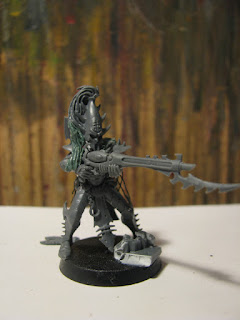 Here's a kabalite also.  A simple head swap feels so cheap to me-- that's a dark elf head, by-the-by.  I should try the other way around-- a DE head on an elf body.

So that's that.  What d'you think?  Is this a thing I should seriously consider?  I know I want some enemies to pose against my SM, so I'll end up collecting something in the end.  (I thought orks, but I'd get so carried away with them I wouldn't get anything done.)