BIIG update: absolutely everything that's been going on

Here we go, this is it.  The big update I said I'd do, but now I look down at the finished post, it's not really that long.  Oh well, lot's of photos to look at with your eyes.

So, what HAVE you been getting up to, D?  Rumours are going around that you're not hiding your furry side anymore; do you deny them?

Well, obviously I'm still on G+.  There's this blog, also 40ksoulslike which I hope to add to quite a bit this year.

Flikr:  Haven't put much up here, as I haven't really made anything!

I'm on Facebook too: linking to it dodgy at best, so yeah, go look me up.  It's Dee Power-- and while you're there, I've got two pages too:  Lonely Kitbasher for 40K works in progress (which I NEED to update soon) and An Apocalyptican fairytale, which is for my novel.  More on that in a bit. 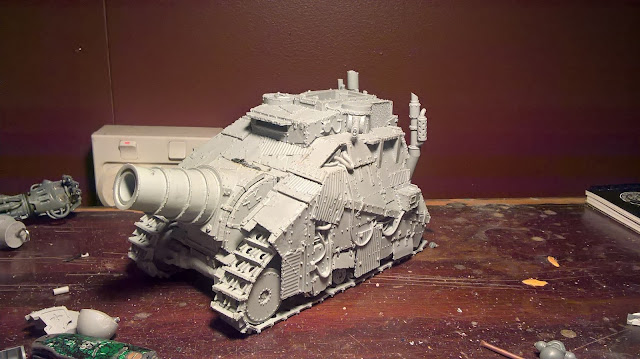 Having taken a rather long break from the hobby (having to make room for everything else!) I've got a rather difficult prospect to come back to: a commission I couldn't quite assemble last year.  The heat buildup of the old place... how often have I complained about the heat?  Never mind, temperatures are fine here and now the tank is re-glued and just wants some re-enforcing now before painting begins. 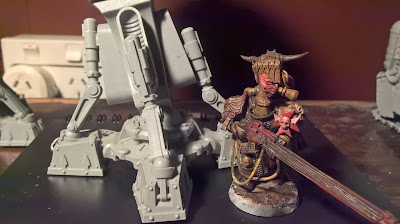 Also, while I'm fresh, I decided to at least begin on my biggest personal model to date...  One of the Cessknights! 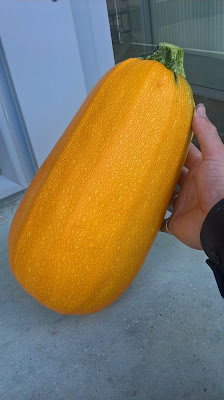 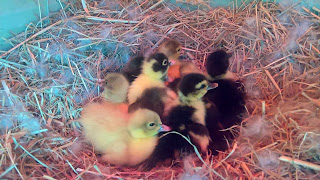 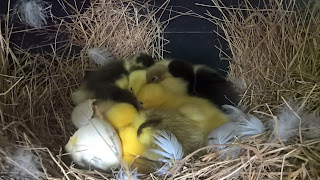 Here's a couple of highlights from my Real Life work; small animals and large vegetables.  It's been almost a year I've worked at this lifestyle block, the longest job I've managed to hold in fact.  This has to be the best of the jobs I've have since-- since ever, really. 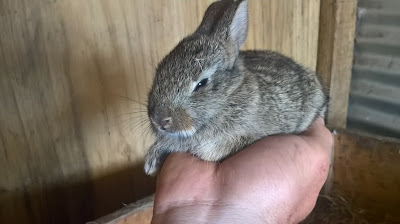 WORK BEGINS ON A WEBCOMIC 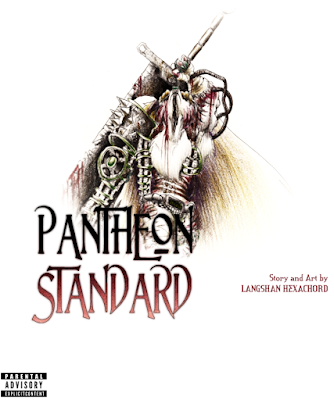 Pantheon Standard is a comic, mostly collecting fragments of a story I've had kicking about in my head for donkies ages: I won't deny it's also a good chance for me to draw mai waifu Rhenya Redblade over and over.  It's set in a dark fantasy/western world based loosely on that the world of King's Dark Tower series, and (I think I'm allowed to do this) many of the characters use the "calla speak" introduced in Wolves of the Calla.  It gets a bit gleefully graphic at times, I'll admit that much.

I've been adding to it really slowly over the last months, and somehow am up to chapter three!  I think I'll be putting it up on somewhere like Comicfury as it's not of a high enough quality for many others, but I'll make sure to link it everywhere once it's up.  Here's a page just to give you an idea: 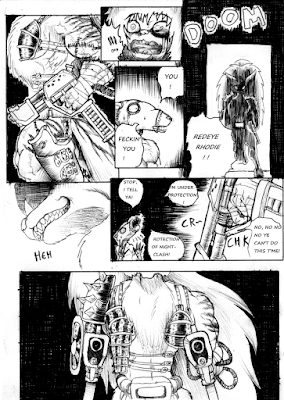 AND I'VE FINISHED MY BOOK!!

Welcome Home Book 1 has been an ongoing project since 2012, and I can't believe it's got to this point!  A 90,000-word dark fantasy set around the wanderings of Rygnir Wyndfallen, an orphan of dubious origin and the folk he meets on the way to declare his "grandfather"'s death to an unknown noble.  It's quite lavishly illustrated for a novel, at least I think so; having grown up with books like The Black Fox of Lorne I remember deciding long ago that I would illustrate the book myself, in pencil.  Also, being an artist, I couldn't help it.

The novel is the next step down from dark fantasy: would you call that grimdark? As the subtitle Apocalyptican Fairytale suggests, it's set in a world that is either on its way out or went out long ago.  Everything's as screwed over as it can possibly be, even the celestial bodies don't move like they should: yes, there's a lot of inspiration from Oldhammer here. A lot. 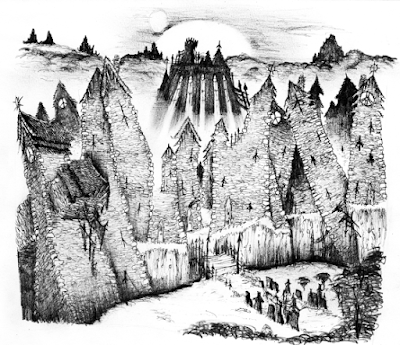 Here's what the physical copy looks like so far: 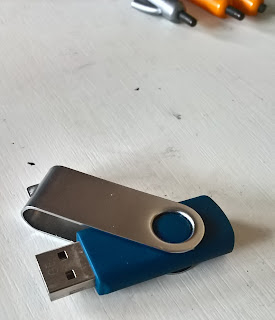 Ayup, there it is.  90,000-odd words and 50-ish illustrations of every sort.
So if you like grimdark fantasy or you want to see this project progress, find the An Apocalyptican Fairytale page on Facebook and give it a like!  Again, sorry I can't link Facebook here.

Meh, I don't trust to hope.  I wanted to get married this year, but then I wanted that last year too, so...

I want to get my book published!  That's an easy resolution!  It'll get done this year, honest injun!  That's all I'll work towards, then once THAT'S done I'll think about resolutions.

So that's that, I think.  Stay tuned, and keep an eye out for the completed novel!  Bye bye for now.

Hallo everyone!  I'm back, and I'm not dead! Okay, I'll get a decent post up soon, detailing EVERY SINGLE THING I've been doing during my end of year "silent running", but first I'll just throw this up for you too see.

Yar, I've moved!  From rural Nelson too... rural Nelson.  It wasn't that big of a jump, truth be told, but when you've set up your man cave Just how you like it, any move is destructive. 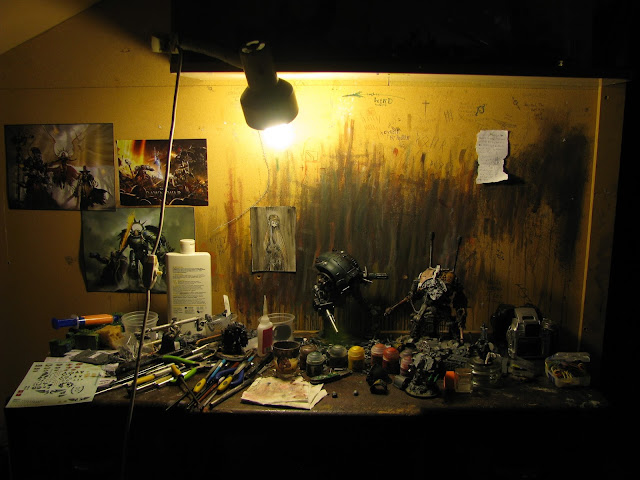 Here's my old workspace.  What you can't see is all the boxes I used to contain my sprue in surrounding the stool, so I could swivel and grab just like that-- whoosh. 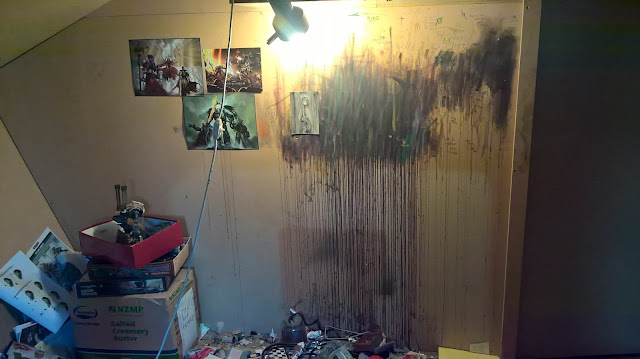 ...And here it is after stuff's been moved.  Among all the other things I found in the detritus was... I don't know, I might suffer from Diogenes syndrome.  Swags of transfer sheets I knew from the start I'd never use but kept them anyway! 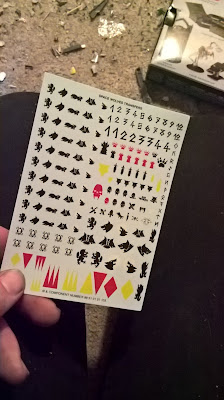 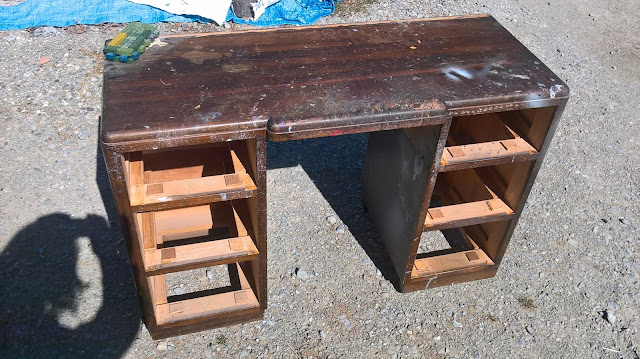 Here's the fabled Sago altar, out in the daylight for the first time in... what, eight years?  Ten?  Those mega bloks on the corner were super-glued on there, and took rather a lot of kicking to get off XD 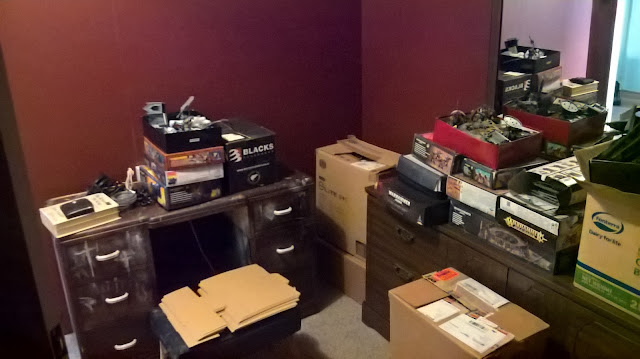 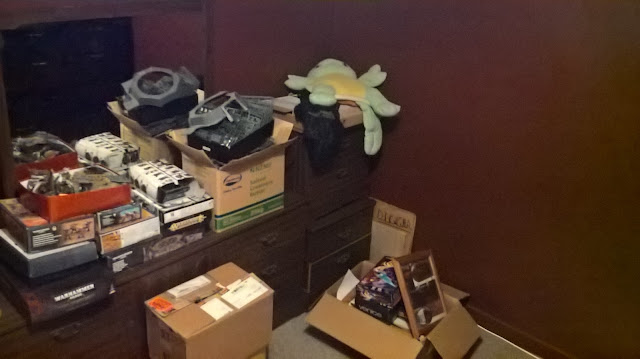 A few of you might've already seen these, I put them up on G+ a while ago.  Only very slightly extremely terrifying prospect.  I had to invest in eight hundreds sets of drawers to contain all the sprue-- NO!  NO I'm NOT cutting all the bits off into little containers!  Half the fun for me is searching the sprue!  I am HAPPY to invest in eight hundred sets of drawers, muahahahaha! 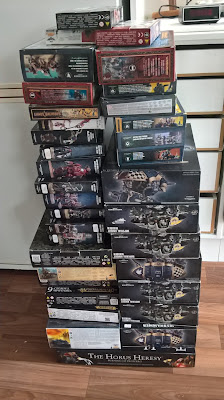 Here's another thing I found in the old place.  I remember wanting to keep the empties for some elaborate joke involving that birthday scene from the 1st Harry Potter film; "How many are there?"  "36, counted them myself-" etc.
Seven IKs, though!  I believe five of them were commissions. 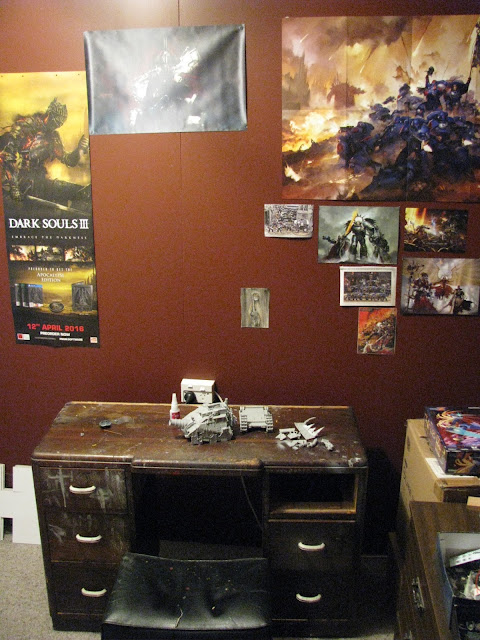 And so, here's a badly lit shot of the new space!

I'll be officially re-opening for commissions soon, once I've got things a little under control.  Expect a full update post soon (or later) with everything that's been going on:  books about to be published, a potential webcomic on the way, more social media outlets... all sorts.  Stay tuned!