Hobby update: My own legion of the damned 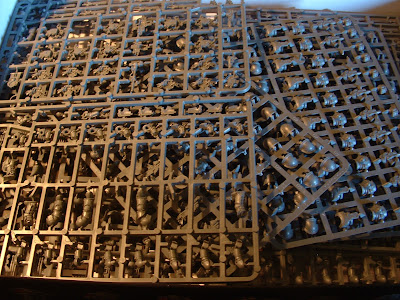 Let's get this out of the way quick-- I LOVE the Prospero box kit!  MKIII must be my favorite sort of power armour, and all the other cool bitz you get-!  $300+ NZD was a stretch, but I know I won't be needing to buy any more plastic crack for a great long while.

So what will I be doing with the set?  Oh, you know I won't be assembling them as per the box!

But truth be told, I wasn't really sure what to do at first.  I had a bit of an experiment with bits and pieces; first and foremost I put together a Sagodjur Fjorlag with a few MK III bits; 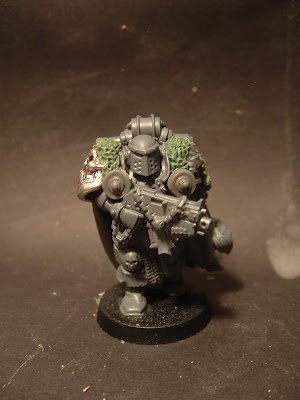 I buckled and assembled a tataros terminator in the way it was supposed to; 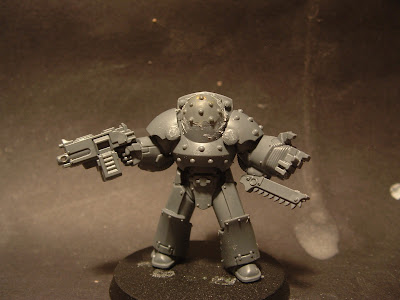 Yup, exactly as it was supposed to...  And using the custodes bitz, I made-- drum roll please-- 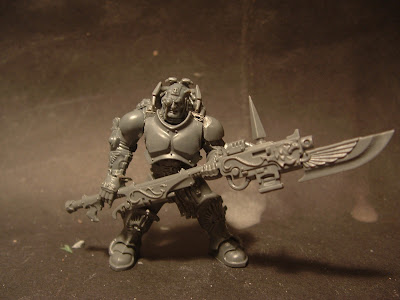 ...Still working on it... I wanted to mix things up a bit with some Sigmarine pieces; I also bulked up the torso with a plastic wedge between the two halves, making the collar a bit more raised.
That's all very well and good, but I wanted to do something major, something nobody could bring themselves to do, something that would cause you to flinch!  Hee hee, aren't I mean. 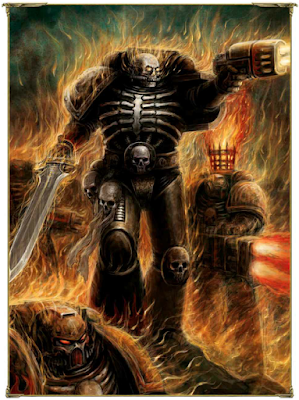 The conclusion of the following brainstorm was quite exciting.  I've always wanted my very own Legion of the Damned; their mysterious backstory making them sound like hallucinations interested me (of course it would!) also melta weapons deep striking into the battlefield is a nice thought too, but-- canonically, I can't field them.

As far as the story goes, they only started being noted as a phenomenon from the beginning of the 41st millennium.  My Chapter, and by extension all (or much of, at least) my 40K-related work is based in mid M35, four thousand years before the LoTD were even known of.  While I could be a special snowflake and say "Oh, they chose to appear before MY Chapter because..." but I'm not one to twist the existing lore to suit myself.
During the initiation process of the Sagodjur Fjorlag, in a step known as Drepa, the dripping, neophytes are compelled to make war with "the generation dead", the essence of past Sago Astartes brought back by the Librarius.  What then would happen if the librarians were to summon those dead from the warp upon the field of battle?

What would happen if I were to combine the LoTD-- 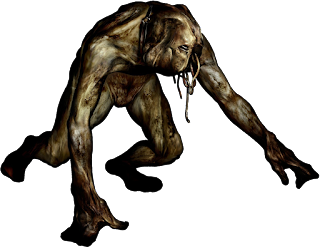 With, as always, Silent Hill? 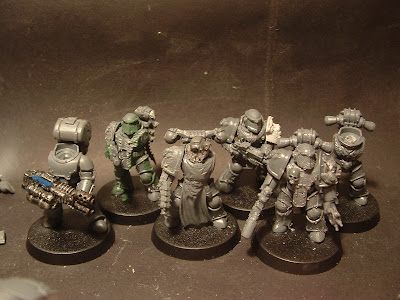 So this is the beginning of my experiment; The generation Dead, my counts-as LoTD.  I'm working towards a ten-man squad with a plasma gun and multi-melta. 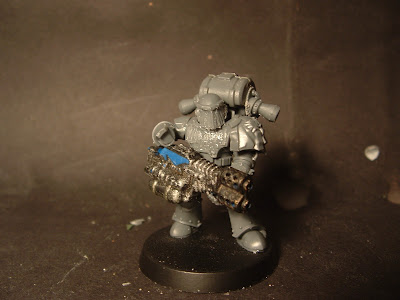 The silhouette of the MKIII armour needs to be kept, but, as it were, out of focus-- as if you don't know where to start looking.  Cutting into the plate and brushing glue over it leaves a soft layer to work with. 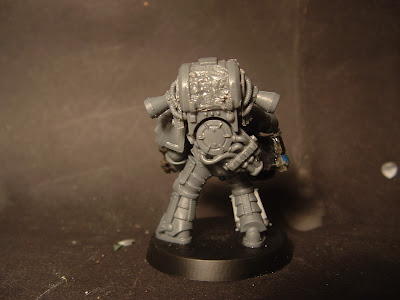 So there we are!  That's what I'll be doing with my hobby time, between commissions and things. 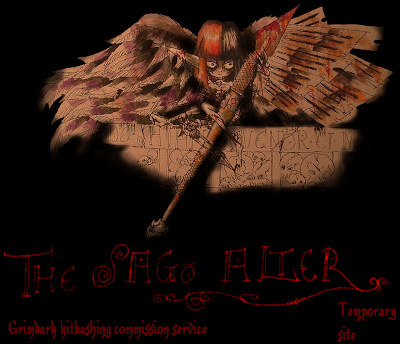 So I'll be accepting commissions now!

Setting up a website is taking longer than I thought (oh dear), and with my time being taken up elsewhere-- e.g life-- it will take a very long time, but that won't stop me from accepting commissions!  Just 'cause I don't have a website doesn't mean I can't start work straight away :P

Ah, okay then!  welcome to the sago alter!  I've copied the data I'll eventually be putting on the website, and put it onto a series of pages here, just to be quick.  This is only temporary, and if it's messy I apologise.  The proper links are up on the top right of the blog, just below the title; or click here to go to the "Home" page.

So I would ask of you, I need someone to test this system for me please?  I'd like someone to volunteer as a guinea pig, to"place an order" and see if the system is at all usable.  Criticism is always accepted too, I only want to make this  fun and easy thing for you!

Since the buzz of dreadtober, I haven't been getting much finished-- that's because I've started SO MANY BLOODY PROJECTS and I'm working on them all at once, fool that I am!  Aside from finishing new game+ on Dead Space 2 and Legion by Dan Abnett-- Throne, what a ride that was!-- and trying my hardest to wap my head around HTML, the rest of my free time has been spent at the alter of the scalpel.  Why?

I'm thinking about setting up a commissions webpage.  Painting will be a thing, but more importantly is the kitbashing.  You can ask me for anything-- daemons, flyers, Primarchs, anything!-- and I will create all you desire, for a price.

It's not going to be much, just a page or two with some drop-downs and a bunch of photos, nothing too presumptuous, I hope.  I know there's a lot of painting services out there, but I'd like to be different, in that my byword is GRIMDARK.  You won't find me airbruhsing pink & yellow Fire Warriors and I make no shame of my atrocious blending.  I'm not really a wargamer, I'm an ARTIST, and this is my style, dark as it is.

So, what have I been doing all this time, by Throne?  Making content, I think that's all really.  I can't really be exclusively showing my Sagodjur Fjorlag as examples, can I? 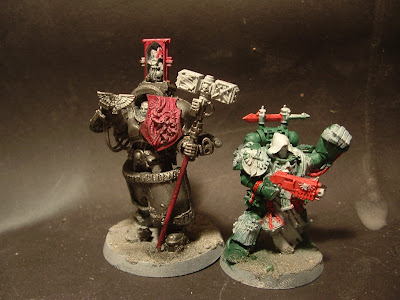 Painting has begun on two major pieces; a Grey Knight Captain and a true-scale child of the 1st legion.  I'll be using these two as examples of finished work, what I'm capable of.
I must say, I'm pretty pleased with the GK! 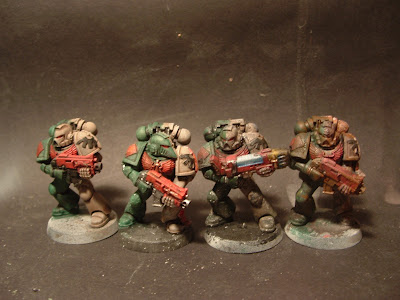 Also work has begun on the four painting styles I'll be advertising.  I decided on Dark Angels successors for examples as 1: I had some spare push-fit ones from the DV box and 2: they have a nice contrast of dark and light colour on the one model.
But now that I think of it, those push-fit marines have some awful poses... 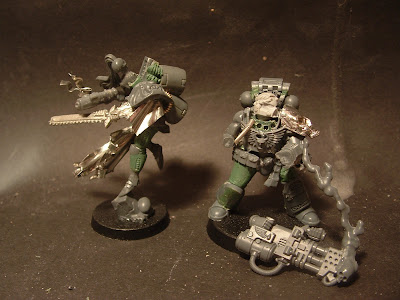 And also some more custom builds as well as also; the seraphim I've shown here before and a TS Blood Angel, with a heavy flamer just for giggles.  I'll have images of both unpainted and finished to hopefully give people an idea of the work that goes into each figure.
I know of a failsafe method of making true-scale Astartes fairly quickly-- if not cheaply-- so I'll make sure I advertise that too.  Whole squads are possible, you'll need only ask! 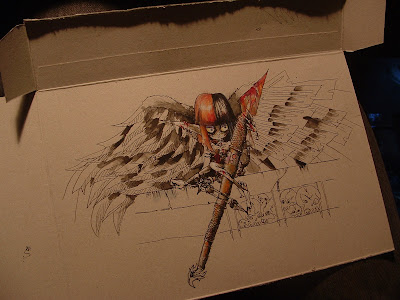 I'm tossing a few ideas about concerning a banner and title...  This little faerie is becoming a sort of a mascot now.  Isn't it cute? X3
I haven't really decided on a domain name yet-- or a name, but I know what I'd like; something to do with darkness, scalpels, alters and faerie creatures, perhaps?

So that's that, for now.  A website, how exciting!  I'd like to hear your thoughts on this too, please.  Don't forget to be happy, don't get clinical depression, and remember-- when you cut off the back vents of a GK body, try not to use your thumb as a cushion.