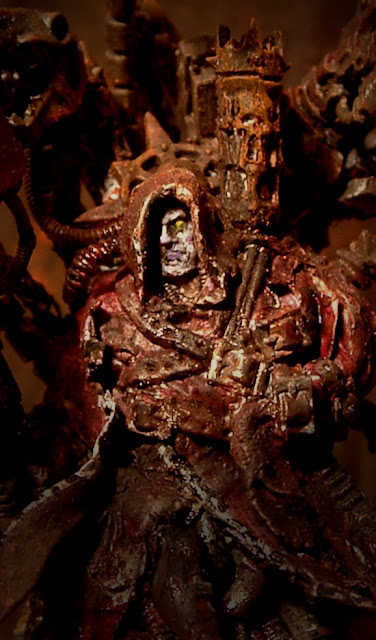 ...That was a thing, I suppose.  This is why I haven't posted for a while or done much painting.

Not sure how to start this post off, so I'll start from assembly.  Not sure what possessed me to attempt this.
Anacharis Scoria, pretty much the primarch of the Dark Mechanicus.  My first mechanicus figure, too-- and what an undertaking it was!  I started with a CSM warpsmith's cape and plonked a dark eldar grotesque body on top.  A legion praetor's head was the closest I had to his proper face, and a few necklaces stolen borrowed from mum and my sister helped to flesh out the area underneath the cloakes. 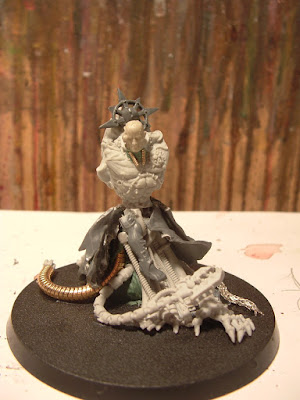 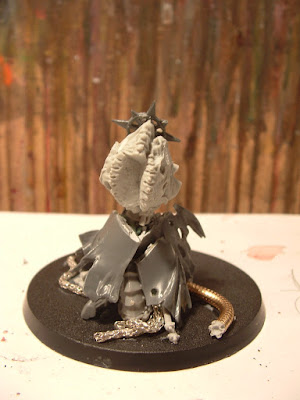 The cloakes, I might note are cut from a vampire knights cavalry sprue-- the exact one escapes me-- built up with greenstuff later.
I wasn't really sure where I was going with this build; all I knew I wanted was the look of a strait-jacket and horse skulls somewhere.  While being the archmagos of the dark admech I don't think Scoria would be so awfully corrupted as his successors; a chaos star and a toothed, fleshy blade on his weapon would be enough for him, I believe.
Another thing was that leg.  A relic of past life as a mortal, he has no use for it anymore seeing as he can levitate. 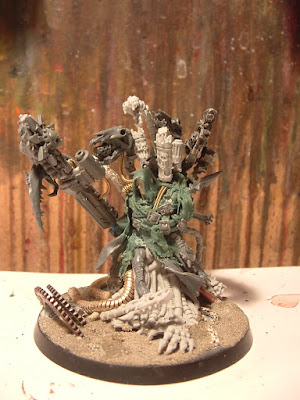 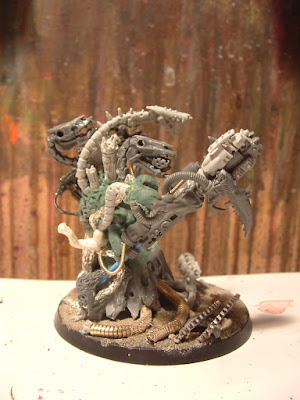 Not very structurally sound, but oh well!
I wasn't sure what to make of his weapon, the voidain scepture.  It is two-handed, but he only has one hand available-- so I gave him another.
So here he is all nicely painted up. 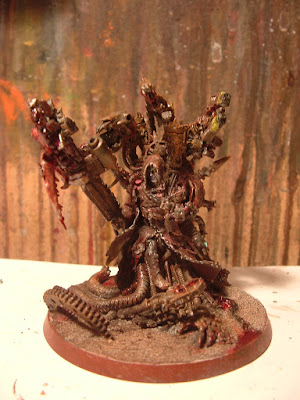 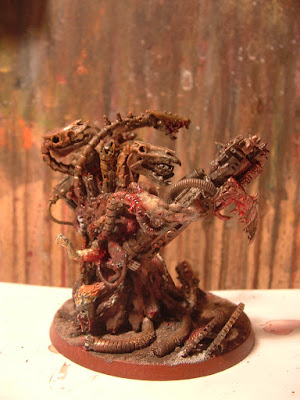 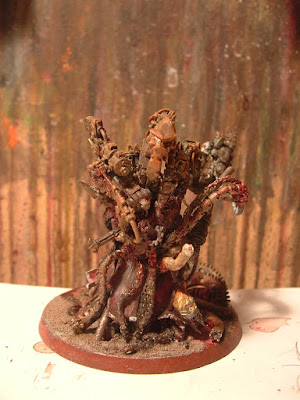 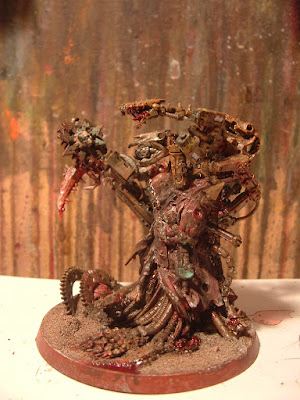 So that's that!  I can't remember if I already filled in my paint-a-miniature-as-a-gift bingo square, but here we are anyway!  A G+ acquaintance and fellow blogger 30kplus40k collects dark mechanicus, I know he would very much like him...
Bye-bye for now.

I can't believe I haven't posted since march.  I'm sorry, very sorry-- but this means the update will be longer, not sure if that's a good thing or not... 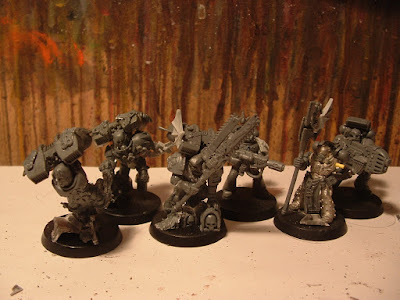 Firstly, I've been a fool and assembled more Angels Encarmine instead of painting what I've already got.  I'll have to stop now-- I'm out of Night Lords shoulder pads.  The metal librarian conversion I was originally intending for the Sagodjur Fjorlag, before scale became a problem in my mind.  I shaved the mask off a dark eldar hellion and it made a nice batty face. 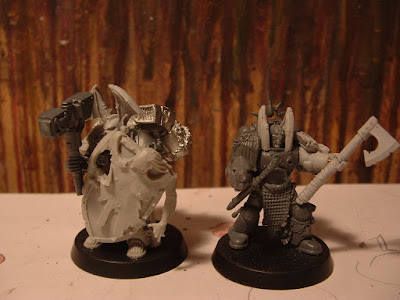 And two captains.  The one on the left will be the DC commander.  Unless storm shields aren't allowed... 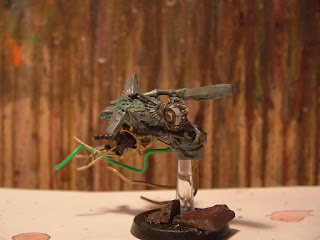 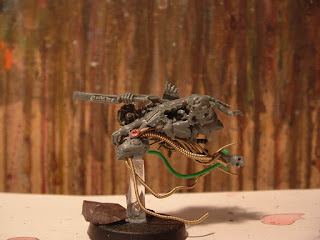 On a less serious note I'm having a go at making a cherubic host to carry the helmet for my 3rd captain Baldr. 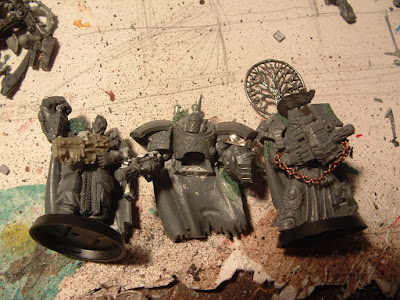 7th command is coming along slowly, very slowly.  From left, we have; Dormouse, Queen (sergeant) and Carpenter.  D'you see the theme?
The first one I finished was Hatter. 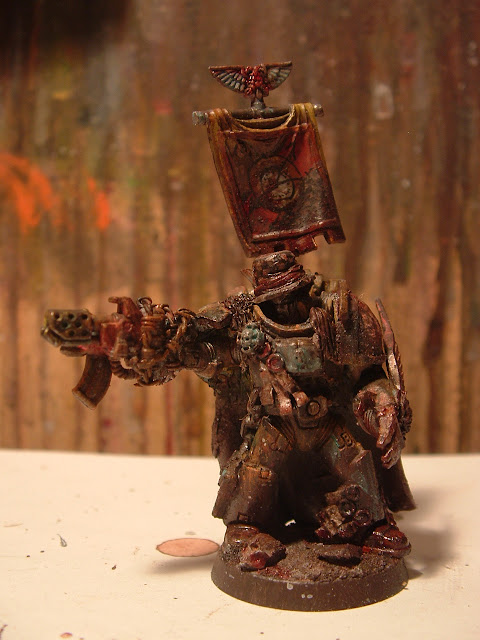 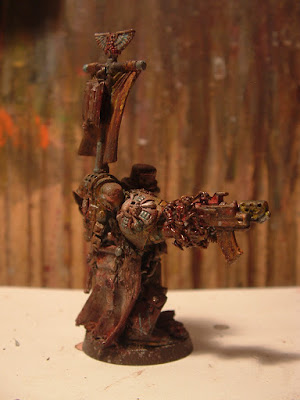 Not sure if the photos show it, but yes-- I gave him an in-this-style-ten-and-six in his hatband. 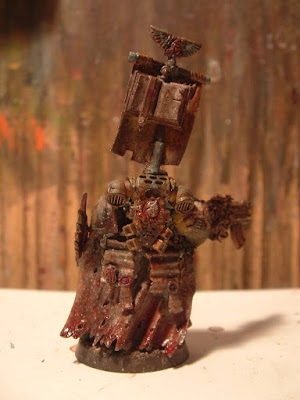 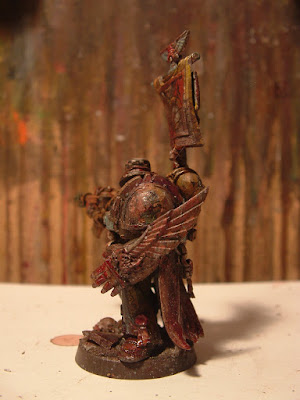 Also I'm still striving to get 7th captain Thunraz right.  I think this is it, after about five incarnations...
Not sure if his weapon would count as a chainaxe or a thunder hammer, but I'm finally happy with it!  Especially the Blanche-esque wing crest. 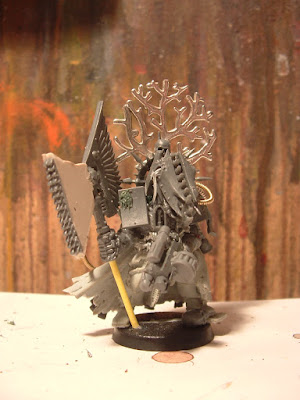 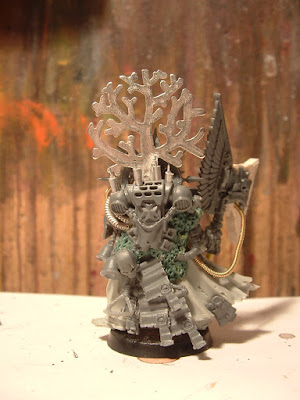 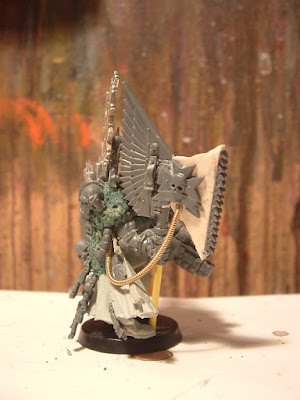 So that's that.  A lot less painting than I'd like, I know that much-- and now with the 2016 space marine sprue sitting on the bench I'm not sure if any will get done at all, but oh well-!
Bye bye for now.