A Helbrute: because why. 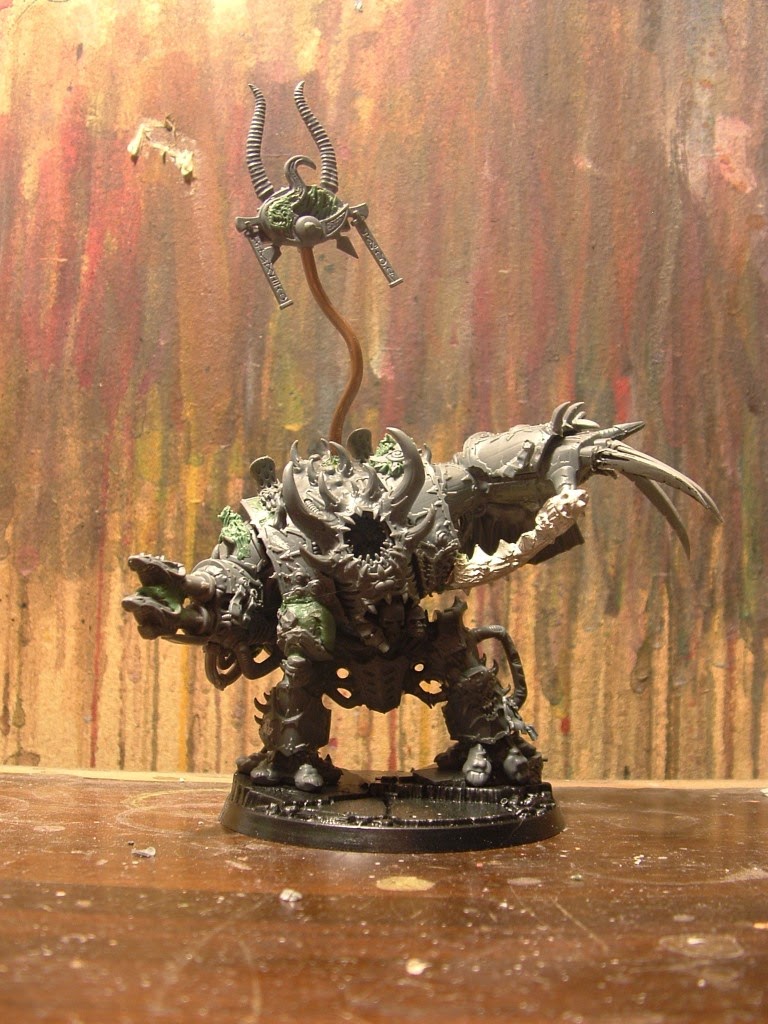 Well, this was fun.  I converted the Dark Vengeance Helbrute into a more Tzeentchy one, simply for the hell of it.  That pun was worse than lame. 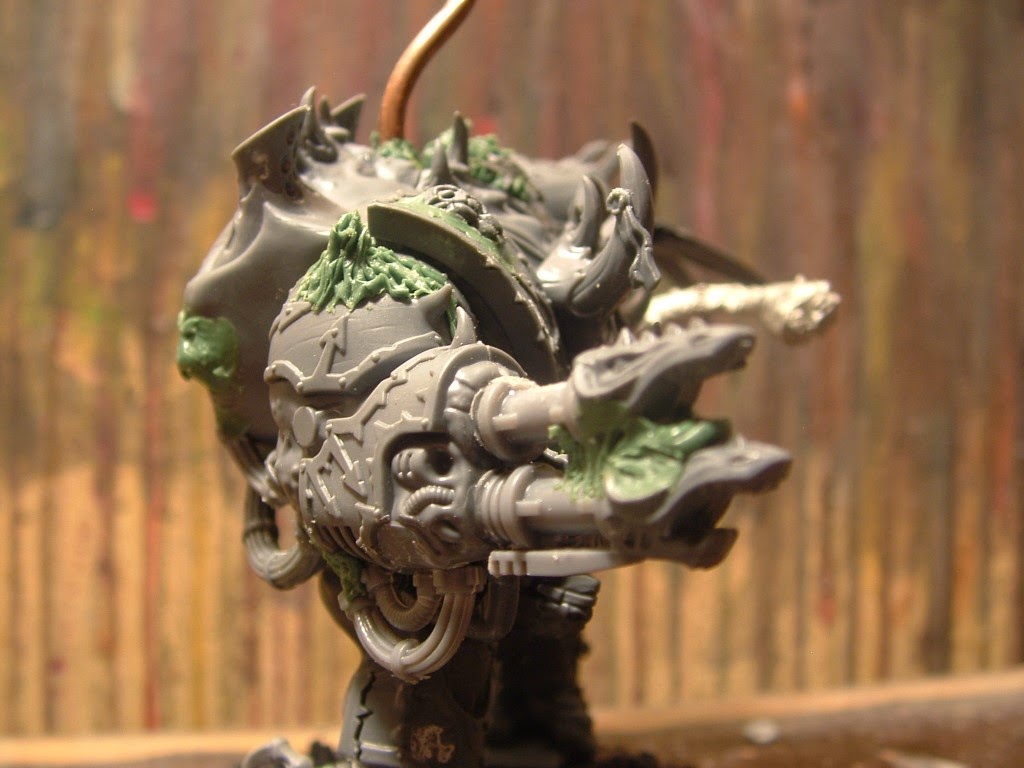 I've seen several people swap the multi-melta for a lascannon, which I thought I'd have a go at also.  I added a mess of lascannon cables to the weapon and tried to make the upper muzzle look like it was melting into the lower one. 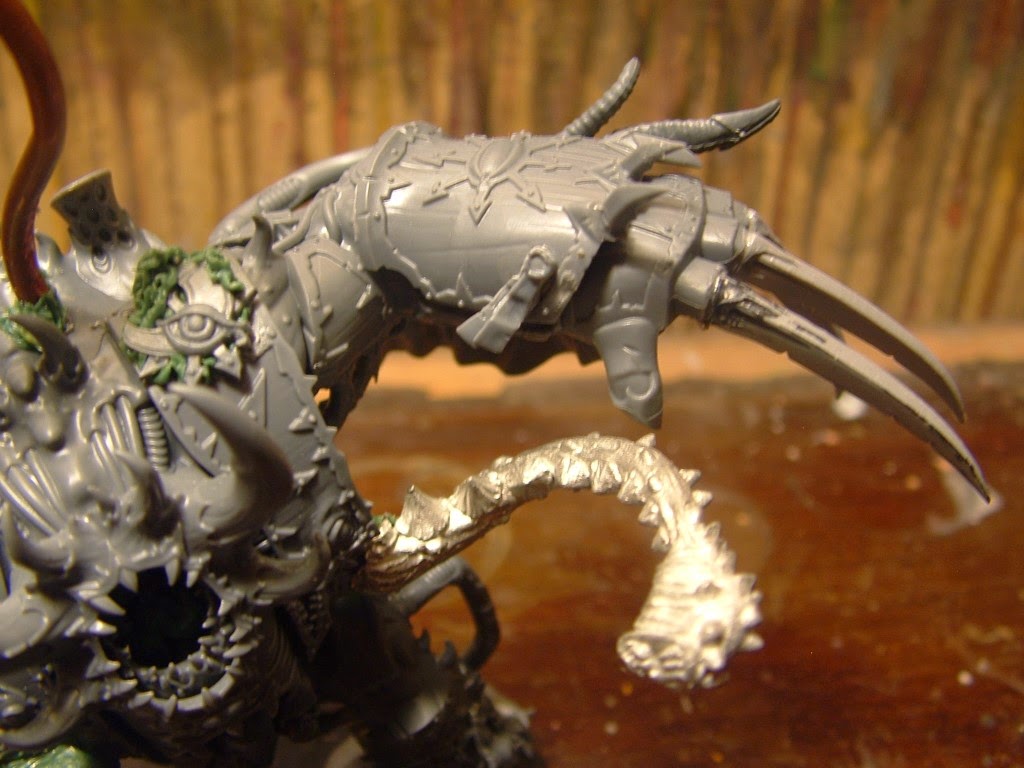 Some of the spikes I replace with antlers from various people's helmets, and the fingers are hormogaunt scything talons.  I also found a metal tail from I don't know but I'd love to know who from. 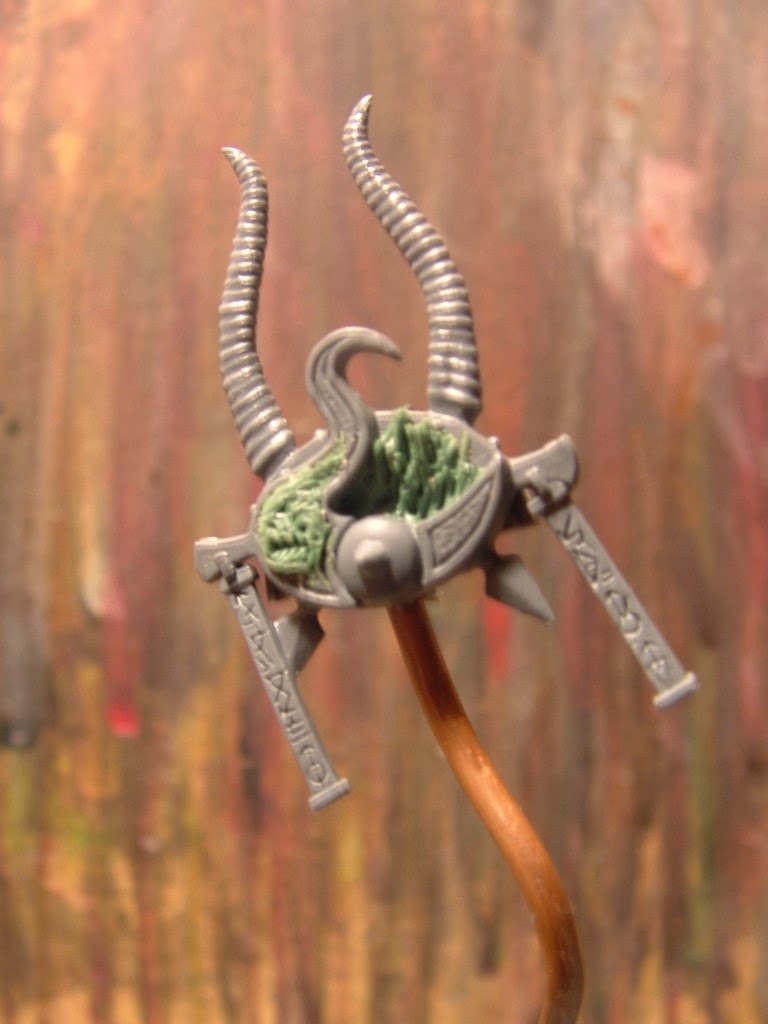 I combined a tomb kings standard with a Tzeentch one and mounted it on a brass pipe.  I had a go at sculpting unnatural fire erupting from within, and a mouth leering from the icon.  I drilled a hole into the helbrute and sculpted more fire around the base to steady it. 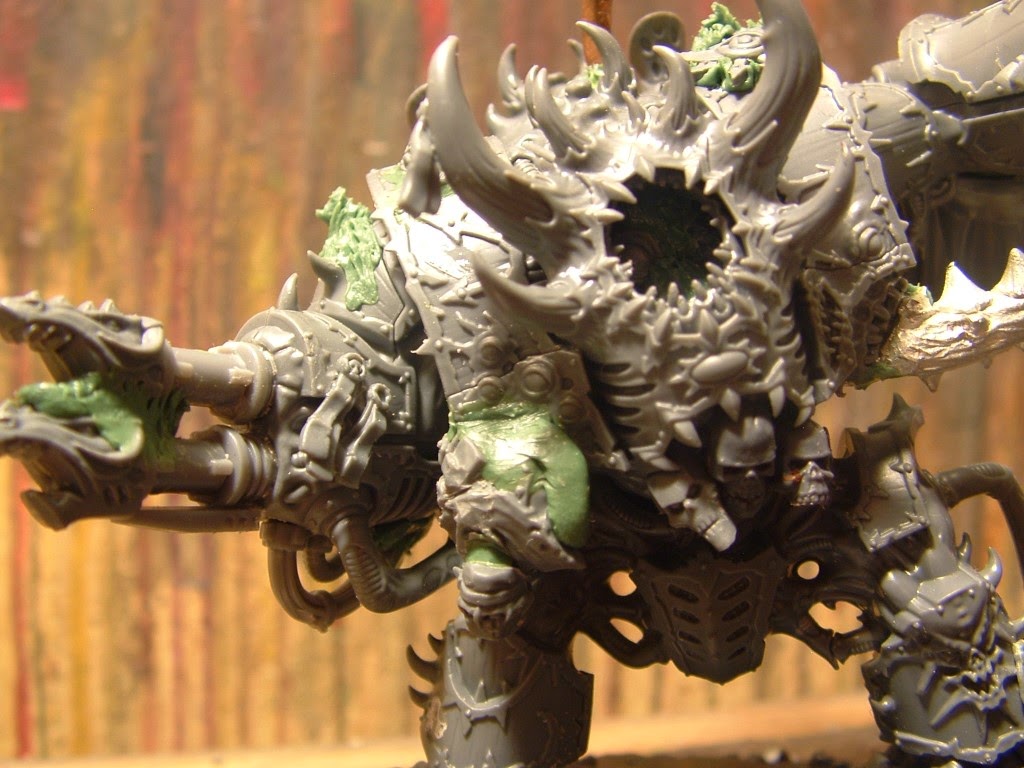 I always like making my dreadnoughts faceless horrors, and this was no exception.  If you look inside the face you can just make out a skull and an eye imbedded in the greenstuff; it will be a pain to paint, but oh well.
The body hanging down is the targeting array I think, and was inspired from an enemy from The Evil Within called the Amalgam_Alpha.  I'd really like to make something more like that one day, like a helbrute split down the middle or something like that.

That's that.  A converted helbrute.

A good while ago, I found an old sawblade at the antique shop.  You know, those ones that folk artists take and paint cart-horses and farm machinery on.  Dad and I put a pine handle on it and turned it into a weapon which is actually quite effective. 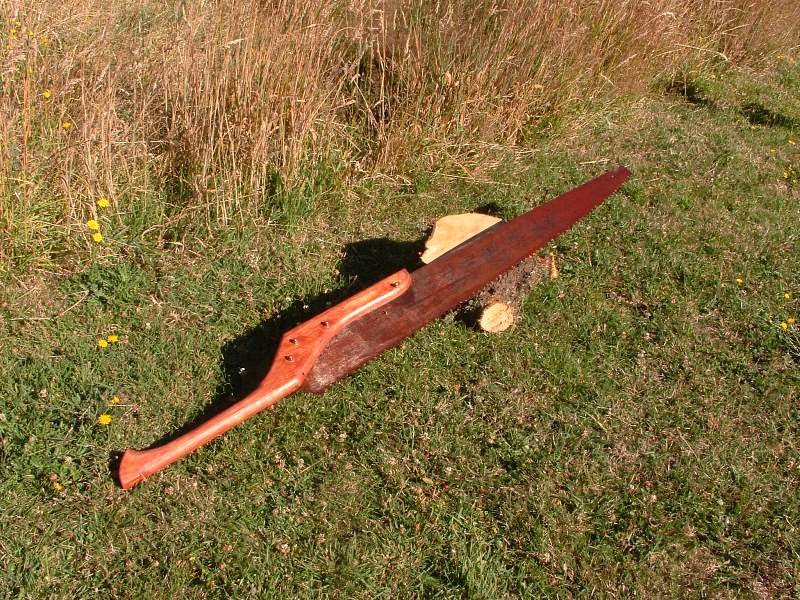 I call it a longsaw for want of a better name.  When I stained the handle, I put a few layers over the blade to give it a rusted look.  I have no skills in welding or anything, so it still has the flexibility of a sawblade; it is not a sword.  It was designed to be dragged behind the wielder. 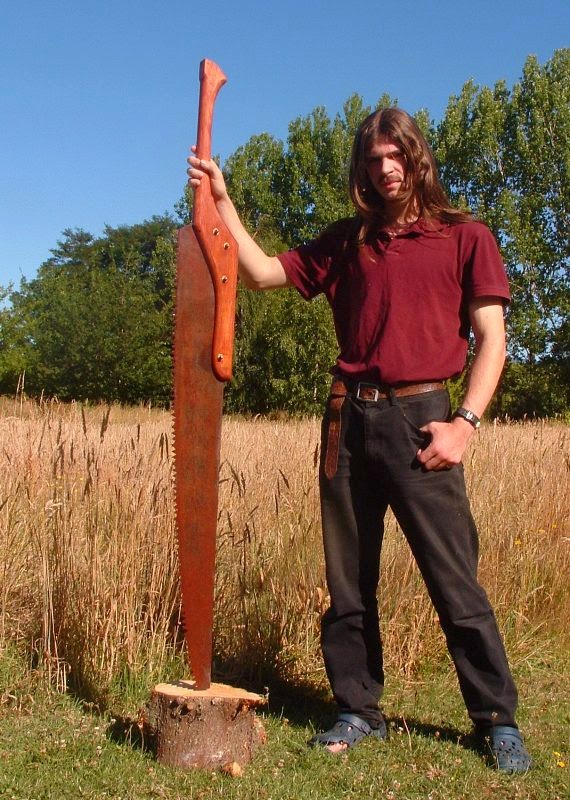 It's also 1730 mm long including the handle and weighs about 8 kilos.  I intend to wrap it in bandages to be carried on the back.  I just need a decent outfit now...

Children of the Imperium #5: The Navigator 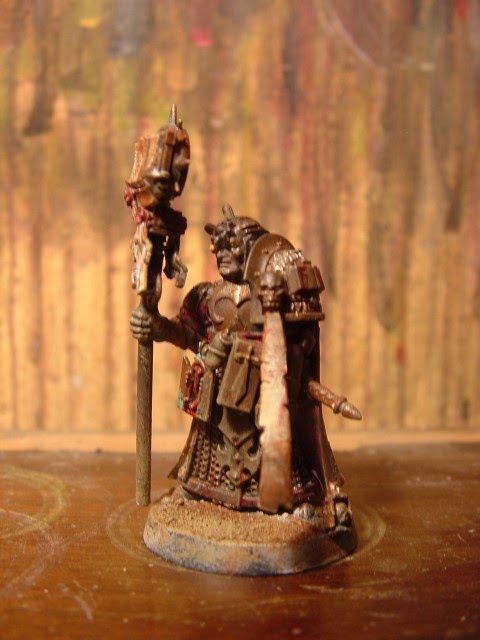 I don't have much for show-and-tell this week, so I'll post some pictures of an Imperial navigator I finished this morning.  He is one of the navigators that guide the Sagodjur Fjorlag's Chapter vessel through the empyrean. 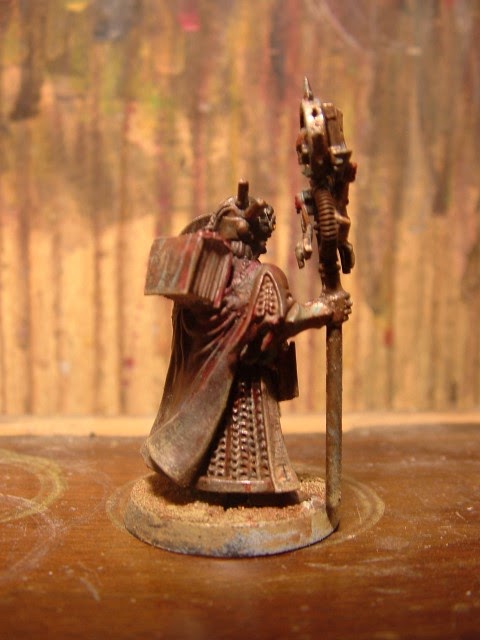 The base was a dark elf executioner's body and arm; the handle of a Blood Angel's combat knife and there are many Grey Knight pieces incorporated.  His third eye was an icon from a chaos cultist.
I liked the pose, it gave the impression of his hiding behind his staff. 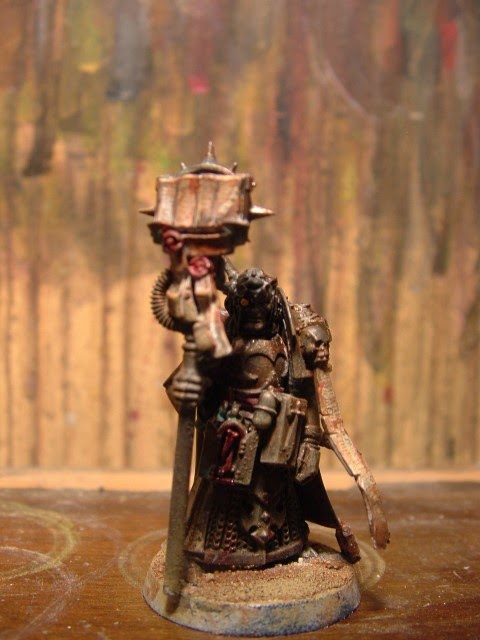 And that's that.  My Imperial Navigator.
The miniatures I post will be unpainted ones for some time, I think.  I just pre-ordered Majora's Mask for the 3DS and will have to set aside a bit of hobby money for that, but oh well.

Children of the Imperium #4: The Imperial preacher Well, this was fun to make.  This is the fourth figure in this series; please see the rest of my blog for the other three.

I had the idea of encapsulating what the Devourer would do to the minds of the staunchly faithful over time, and this is the result.  The Imperial preacher is made from two different halves of Chaos cultists with yet another's arm.  You can probably guess which Dark Vengeance cultists I used.  The face originally had a mask, but I cleaned it up so it looked more like his face.

I wanted to keep the pose of the original miniature, to give the idea of how maddened he is.
His ripper is the remaining one of a swarm he traveled his hive with, preaching of the Doom as he went and giving "demonstrations" of the horror of the Tyranids.  The Arbites found him and confiscated his rippers, but one turned up in the hold of a Rogue trader, so there we are.

Oh yeah, all the literature is from the Grey knights Terminator kit.

And that's that.  My mad Imperial preacher.  I'm running out of things to paint, for I am out of primer and only have so many in reserve, but I'll manage. 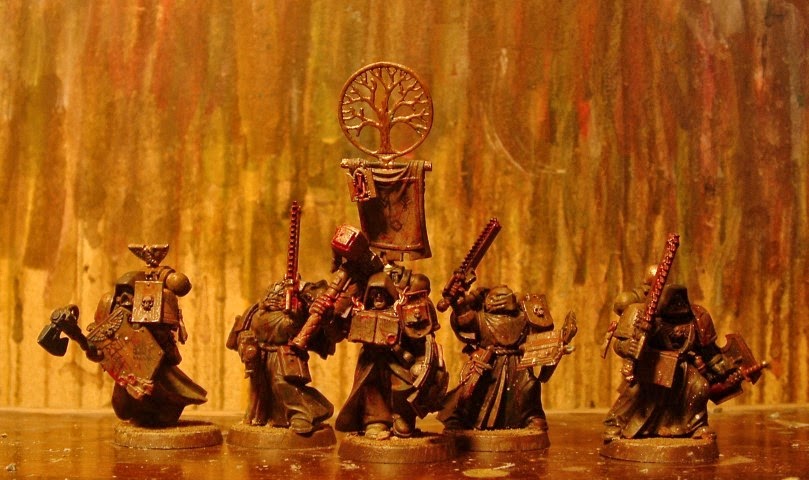 I have less time in the holidays for painting than normal, so this took quite a long time.  Half of my Choral squad, who count as vanguard veterans without jump packs, so this means they get free transport.  I think. 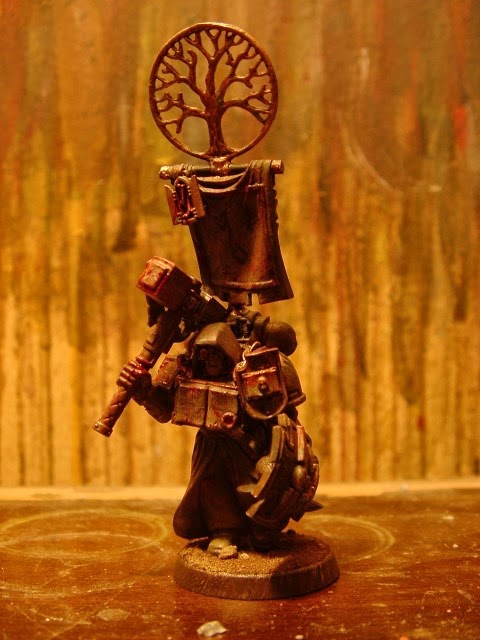 The sergeant took the longest, but it was well worth it.  If you look at the banner, you can see the squad marking. 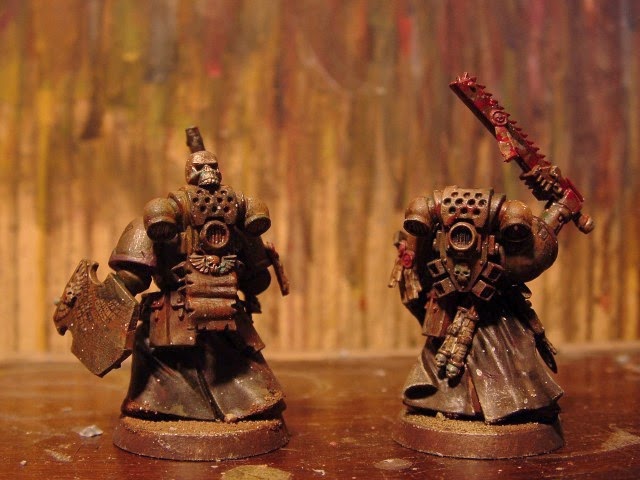 The habits are supposed to be black, but after all the washes and staining and weathering and everything, they've turned a rather muddy brown... 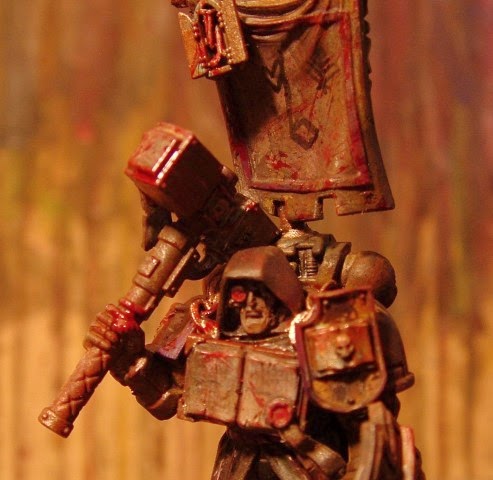 That's that, I suppose.  My choral squad.

Well, it wasn't exactly a tramp, more of a walk, a stroll, a jaunt-- that sort of thing. 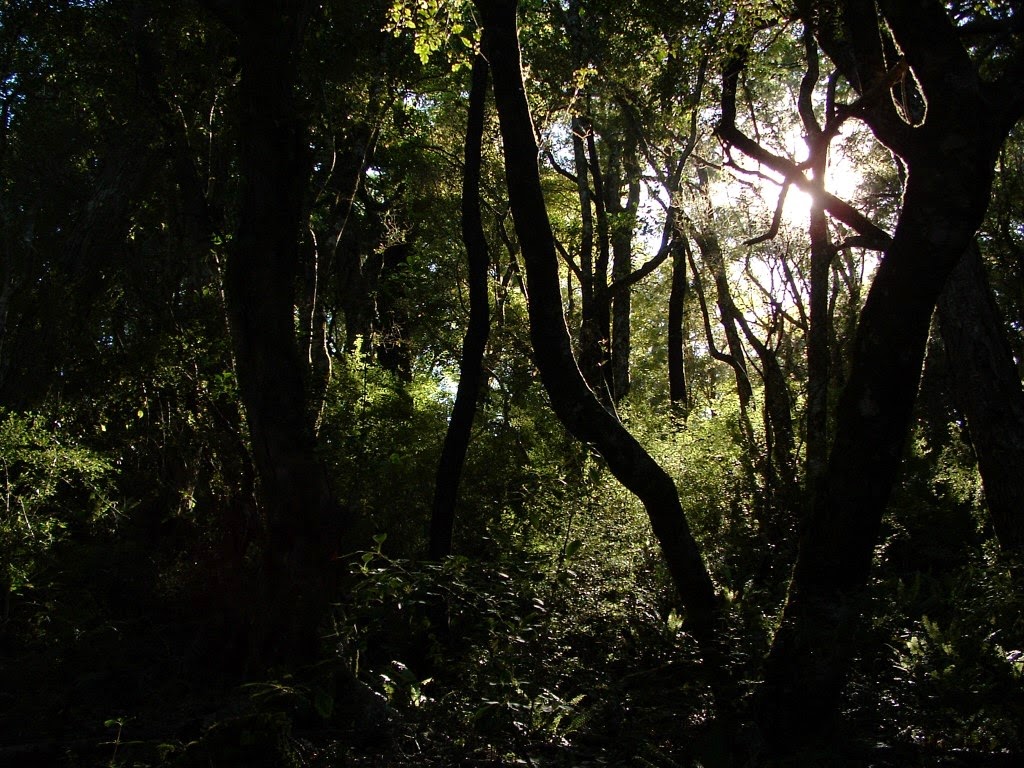 Last night my friend Colin asked me if I wanted to go on a tramp the next morning, I of course agreed.  An elder from our church would be joining us also, which was nice.
We went up Mt Duppa, which is here, accessed via a forestry track off the highway that traverses the whangamoas. 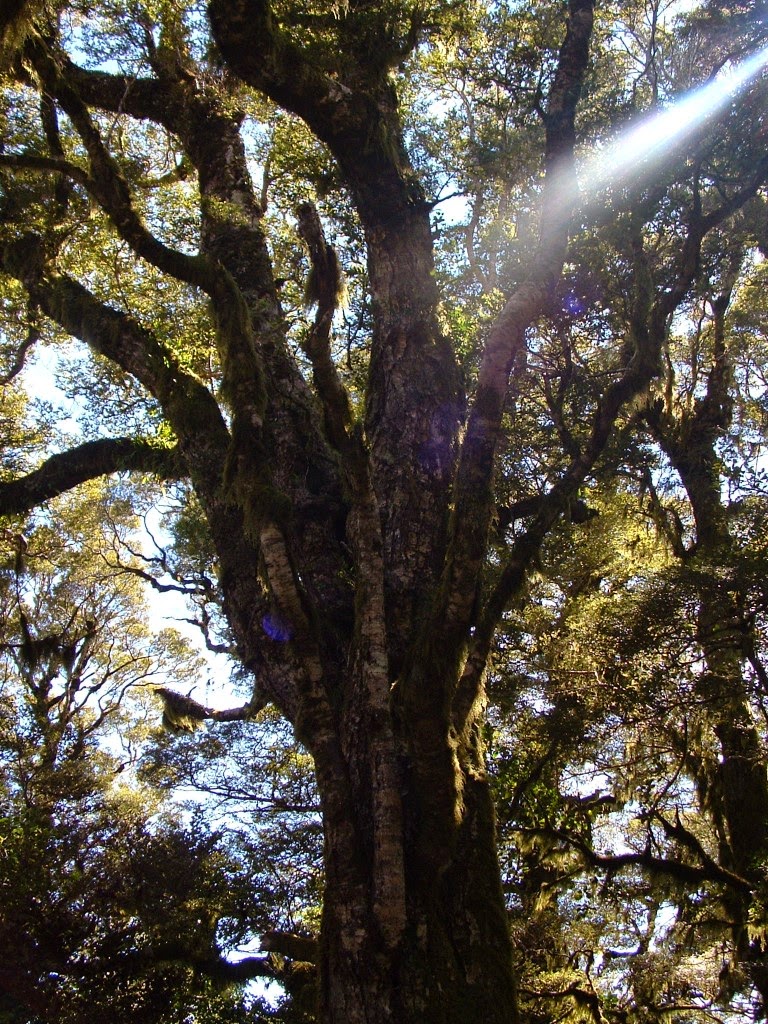 The actual time spent walking was only about three-and-a-half hours all up; two going up and one-and-a-half on the way down.  It was described as "short and steep", and indeed, it was. 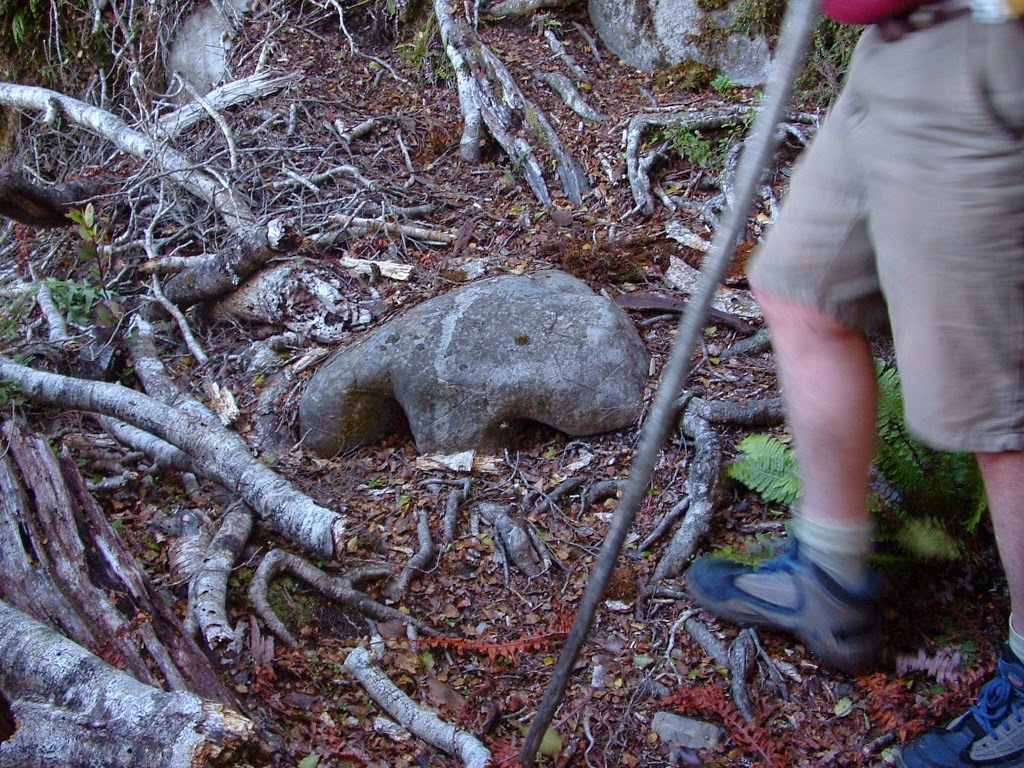 We found a stone giant either dead or sleeping.  We did not disturb him. 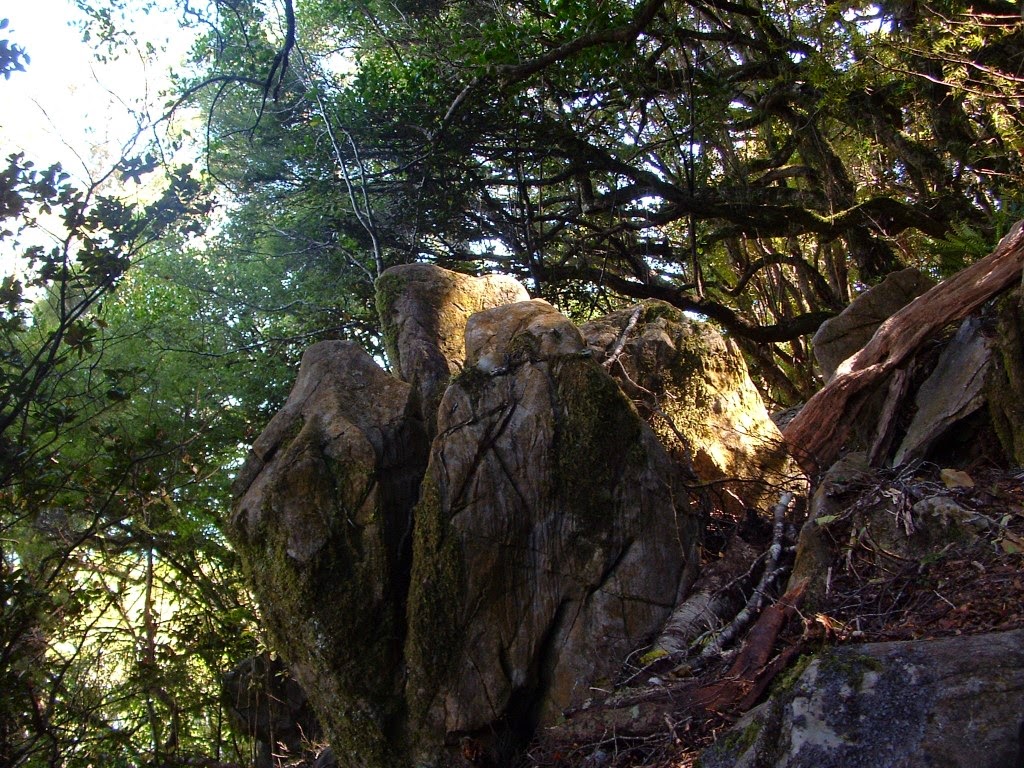 Also, we came across some glyph of one sort or another.  Note that I'm only uploading photos of interest. 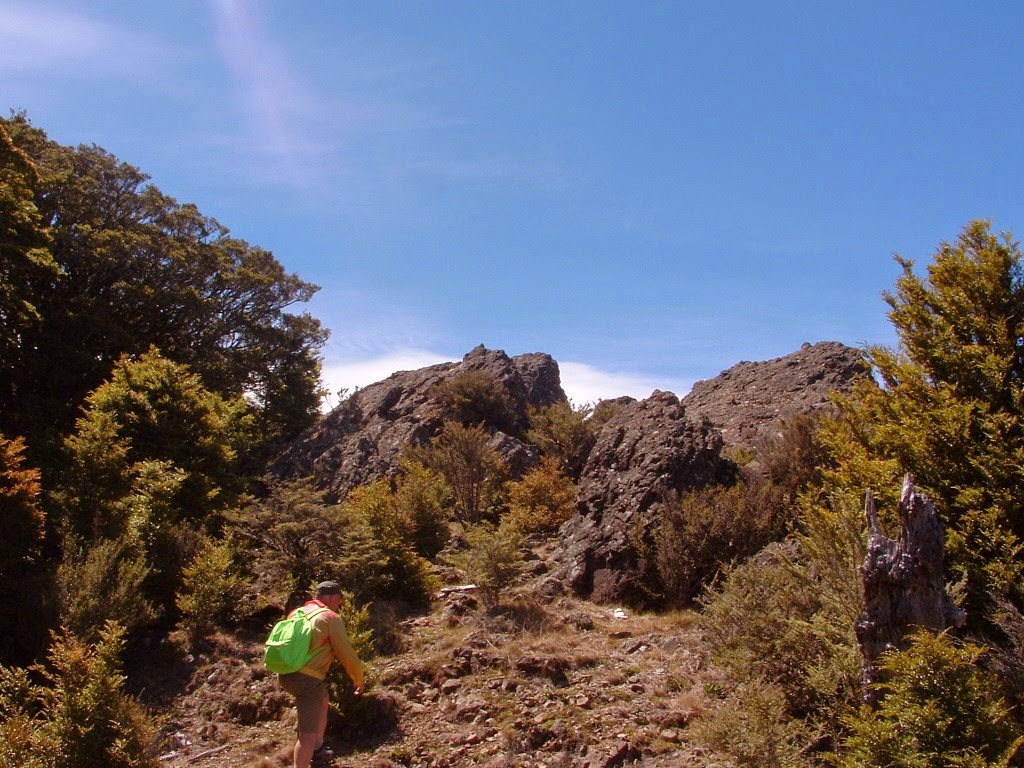 The summit was a little hard to discern at first; there was a trig point, but there was an area higher.  But that sometimes happens. 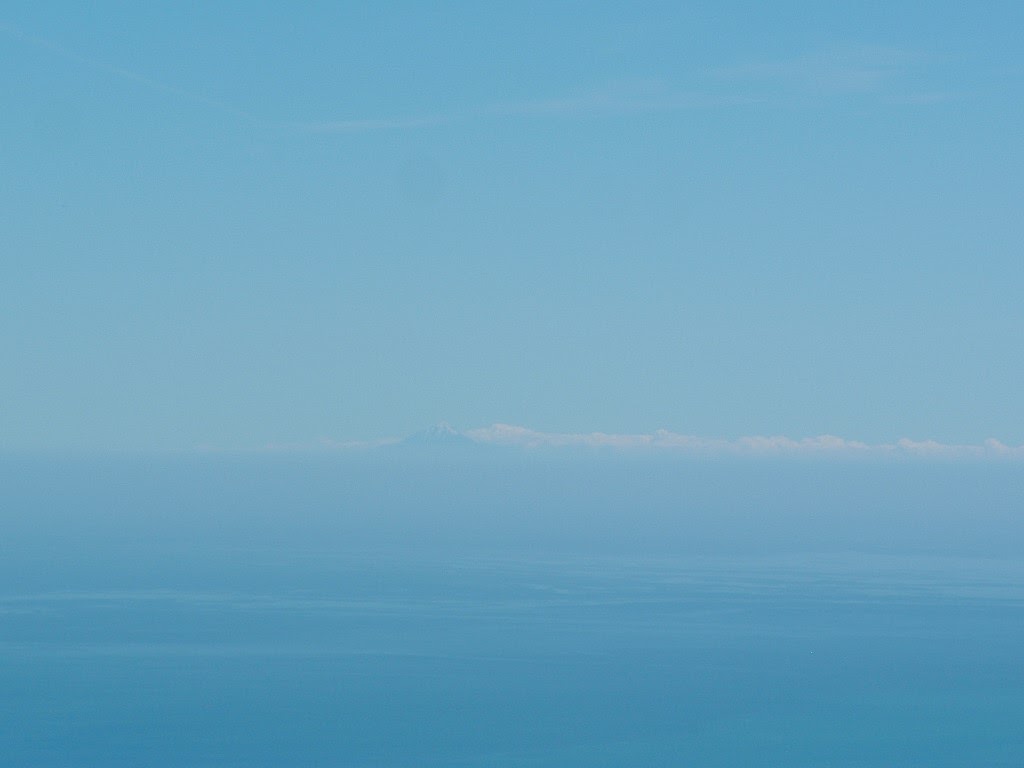 And amid all that blue, I think I saw Mt Egmont. 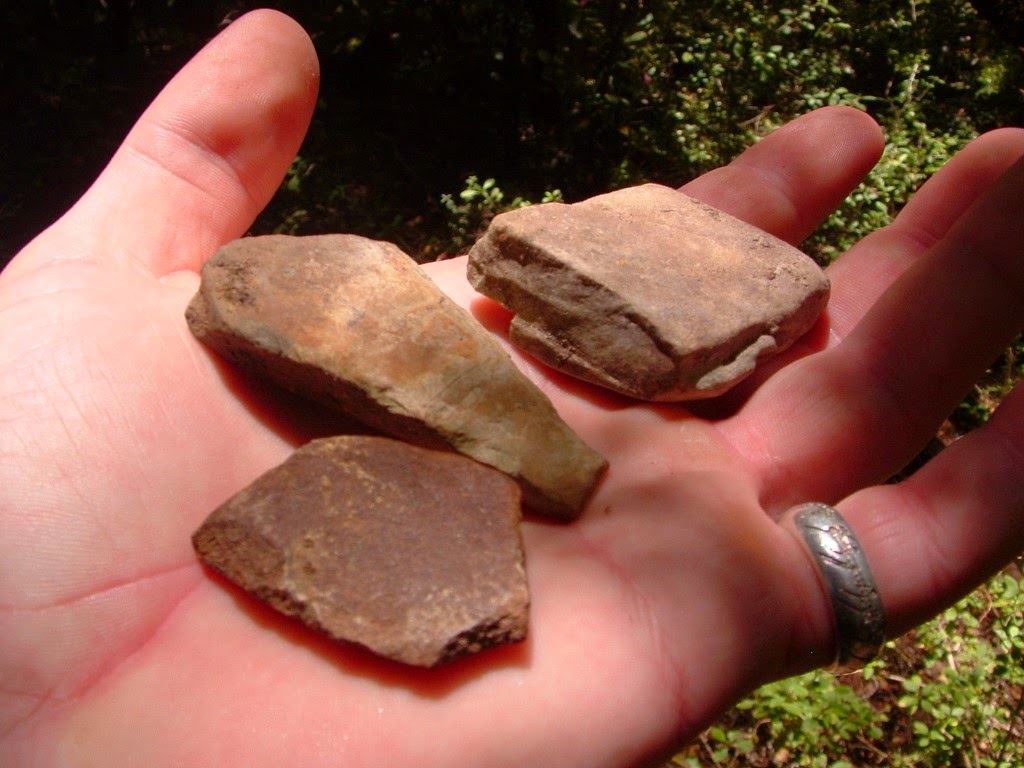 Always with the hobby in mind, I picked up some stones for basing purposes on the summit.Just to make my force that bit more personal-- as if it needed further personalizing, but I have just learnt the value in basing your heroes/commanders higher than your troops.  Before recently, it never registered in my mind.