A sign-off: What deters me from the 40K fandom

Warhammer saved me long ago from the monotony of mainstream media.  It revealed to me there were some stories worth pursuing, there was an audience for grimdark fantasy, and as a right little edgelord, I was not alone in my taste for the insane and the outré.  I grew up with it, matured into as much of a man as I'm probably ever going to be with it, it was a pillar of my childhood's foundation. 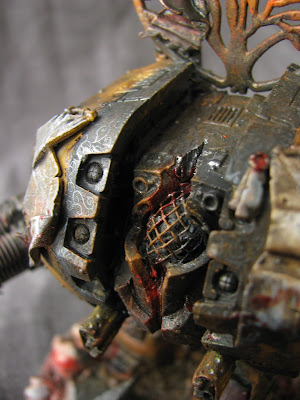 But that was then.  Now the appeal is waning, and there are several reasons which I'll do my best to explain.

I will not bring up the price of miniatures as a reason, because that's easily remedied by toning down on purchases.  There are so many sides to this argument and it's obvious GW won't be lowering prices of existing kits in the near future, so I'd rather not address cost.
Here we go.


1: It is a community-driven hobby; and as a professional failure, I physically cannot people

Firstly this point needs to be got out the way, as of course the same thing could be said for every fandom.  Unfortunately it's just another point of several that deters me, and most importantly I'm the only one to blame here.

A fandom consists of a number of people who like the same thing, discussing it and creating or experiencing that same thing-- but the DISCUSSING I believe to be the biggest part of any fandom.  That's where I, the most socially backwards person ever can attest, falls short.
Warhammer is a game, a game to be played with other people, with other people who like and understand the IP's concept, with friends. Friends some people don't-- or can't-- have. 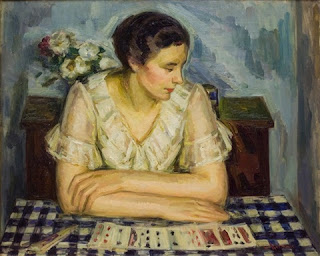 My online presence has deteriorated significantly over the last while, despite me climbing on board new platforms left right and centre, that's really a fault of my being caught up in other stuff-- and a combination of rural locale and dodgy vehicle means I can't really extend my RL presence much farther than the workplace.  How I'm ever going to find a girlfriend at this rate is beyond me... That's beside the point.  Moving on.

I don't believe 40K was ever this mainstream.
This I'm sure I've brought up before, because I'm a fuddy duddy stickler for old things.  Warhammer used to be a hobby, an art expression; now it only feels like an IP to exploit.  True, their miniatures have gotten more and more detailed and pretty in the last while,but is that really necessary?  I mean really truly?  Think about it, does detail enhance the game?  Or rather would it draw new people in?
Don't get me wrong, new people are great for an IP to make money and be more widespread; new people are good.  But at what point does an IP stop being itself, and start appealing to the widest audience possible at the cost of its individuality?

3:  Official art used to be more interpretative than this

I can't leave a rant without at least a bit of good old hobby horse time; I'll try and keep this short.  As a defeated artist, I appreciate an IP mostly through its aesthetic, through its art.
Compare these two tech-adepts, a skitarii and a myrmidon: 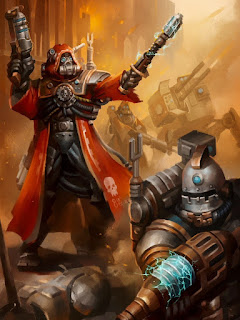 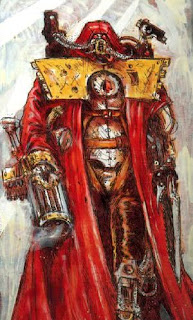 Much in the same way I love the inaccurate nature of medieval art, I found the older 40K art inspiring.  It gave me ideas for kitbashes and painting methods, it added depth and character to a story already rich with character.  The miniatures were simple templates for you to build on and develop your own style.
Nowadays I see more and more art taken directly from the miniatures, and to be brutally honest, some are not much more interesting than studio photographs with their subject matter.  Alright, I might have gone and chosen that skitarii image purposefully, but the fact remains; there's less up for interpretation.  The majority of modern artwork seems less of telling a story, as presenting a range of products.

This harks back a lot to point 2.
Coming into the world of 40K long ago, what the 12-year-old me perceived was a huge, terrifying galaxy filled with such insane darkness and dread you couldn't hope to survive long; the morbid side of me latched on instantly.  This was a fantasy story set in a time so ridiculously far in the future it was obvious they weren't going to pull any stops on the madness.  Guns and vehicles were venerated instead of repaired, religious worship was directed here there and everywhere, aliens nobody even knows the origin of are streaming into the galaxy, man-made gods have taken form but are completely out-of-control...
Maybe I liked it for the wrong reasons; there might have been more fitting IPs to pursue... that weren't anime.  You know, it was the religious part of the Imperium I believe drew me in the strongest, and in the toning down of the archaic, the gothic, the pagan, I've been left hanging.
Like I said before, it was a pillar of my childhood's foundation; it should be left as such.  I don't want it spoiled by washed-out miniature design, lame narrative, and... people.


5: What GW has done/is doing with the IP

If you don't know about WH adventures, it's basically proof that GW have gone full sellout mainstream.
Do I recall a time when warhammer was age-restricted, or is that just a fanciful dream?  Also way to push the primarine shtick, I still don't like the buggers. 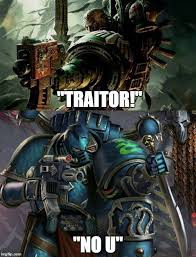 Yes, in the long run I hate memes.  So sue me.
Personal experience has shown me the following; the majority of people are more drawn to funny things than scary things.  Whether they don't like a thing, like it too much or don't understand it because it's too creative or different they'll make it funny.  This mentality I can't stand, and connected to something I took so seriously as a child is oddly painful.

7: people in the community

In every fandom full of great people, there will always be the "badd'ns" .  My tolerance of who I'd consider to be a "badd'n" just happens to be WAY lower than most people, again due to my social ineptitude-- which I should stop wearing on my sleeve as if fishing for pity.
These badd'ns are what give the sane folk a bad name, I'm sure a good deal of you have a story.  Mine is of a guy who couldn't go on holiday without taking his entire (multi-faction) collection with him; so instead of not going on holiday at all, he put everything into a hundred ice cream containers and had them rattle about and fill up his camper.  Funny story, but how does it reflect the community as a whole?

It's not just the badd'ns either, I see a lot of unnecessary stupidity.  I've seen terrible crossovers and ship wars-- yes, ship wars concerning primarchs, ship wars concerning astartes heroes, all sorts.  I've seen people who can't enjoy an IP if they can't poke their diddly-stick in it, so they oversexualise.  I've heard of-- not misusing the word either-- truly retarded behavior of every sort, I've seen animal abusers, thieves, and some real mental cases who give the Columbine shooters a run for their money, all connected in some way to the 40K fandom.

It's all getting a bit much.


You sound pretty sick of it, D.  Can't you just ignore all that and stick with it alone?
You've always been alone.

I could shut myself in, yes.  I could lock myself away and nobody would know where I'd have gone, but the damage has been done.  If I withdraw to try and enjoy 40K by myself, I'll be withdrawing with all those awful stigmata attached to the IP I once loved.  I'd much rather leave it off for a while and let it heal a bit, even if the reasons I hate 40K will never go away.


What are you going to do?

What I'm going to do is move away from the fandom for a while.  2018 has been rough and slow, with illness and busyness and RL, and sadly 40K isn't quite as appealing as it used to be; it doesn't draw me like it used to.
I've got so many other projects I want to do in the future-- short films, puppets, art, not to mention the apocalyptican fairytales I'm writing-- all those things I seem to get more enjoyment out of.  I used to be able to make 40K my own thing, but as time's gone on and the aforementioned reasons have made it more and more difficult to focus on what I once liked.

Where will the dream take you, Lonely?

My biggest following has been generated by my activity in the 40K fandom, so I shall fade and go into the west, which may be for the better.
Sago-altar.com will still advertise my commissions painting of course, that's a part of my life now and a source of a few extra dollars.  This blog, if I do continue with it, will more than likely be related to things other than 40K, so if you're wanting to clean up what blogs you follow, it'd be best to take this one off for now if you're here for the 40K content. 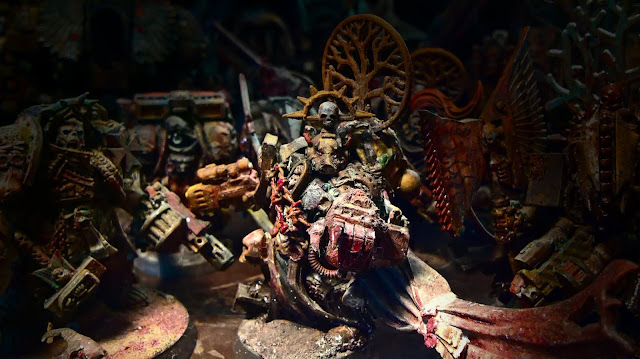 For so long
I have wandered, I have fought
Now the road is at an end;
I've climbed the highest mountains, seen the sea beyond the hill,
I'm Alone with a Dream...
Posted by D at 22:31