When I remember-- and while they still have them-- I try to leave my local EB games with a LoZ gatcha pod/blind bag for giggles.  So far I've got lucky and only had one double-up, which is a pity because I want double-ups so I don't feel so bad about kitbashing.
By-the-by, I'm making plans for repainting my TP amiibo (grimdark OF COURSE), but I'm going to need to practice first before I even touch it.  I couldn't bear to do Midna any wrong...

While I was wondering what to do with him, I discovered his hands were ork-sized!  that opened up a lot of options-- I could have been as cheap as I liked and just given him guns.
Pinning wasn't a problem at this size, which was a nice change.
Microchain from my inexhaustible supply and my own barbed wire; an ork pauldron and some SM pouches.  Then there was the question of a shield... 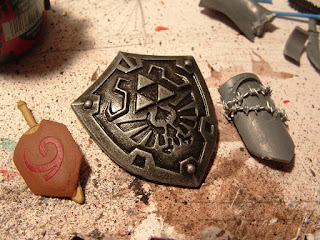 Basically I had three options available.  Oh, I feel terrible now for not choosing the Hylian shield!  It would have looked nice, but I want that saved for the amiibo build.  The sigmarine shield (minus iconography) is a great deal smaller but it's a bit like one from aLttP, so it had to do. 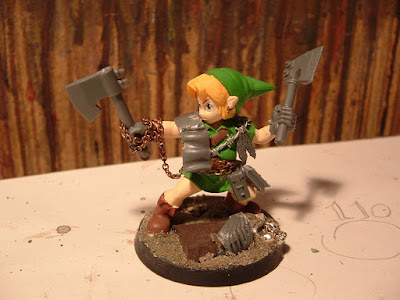 Here's what I decided on, item-wise; I've given him the letter from Zelda, the phoenix feather and the translation book, was it Mudora's book? 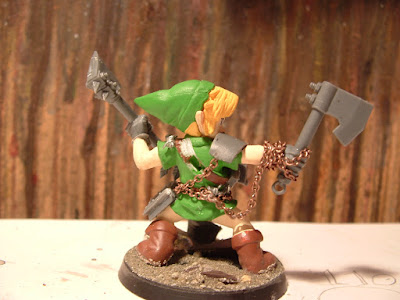 I'm terrible at basing, so the tired old sand/stones will have to do. 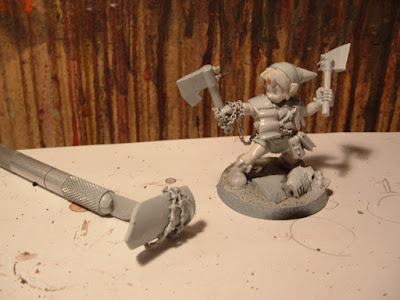 So here's what I'm up to at the moment.  Everything's primed and Throne, am I excited about painting!  Last time I painted a Zelda figure was this fellow back in 2014!
Though I'm not sure about a scheme yet.  What tunic should I give him, I wonder-- what shield?  Pink hair?  Oh, the indesicion!

***
Reason had vacated his mind long ago amid the howl of the ordnance away on the blood-slicked hillock.  The screams of dying mortals around him bled through his battle-helm without cease in waves of pain, but he savoured it now when once it was simply ignored.  Half his vision was dull from muzzle bright and half hazed with the blood pounding upon his eyes; so late into the siege he had forgotten about the agony his legs were in.
So late it was.  He had seen the sun set twelve times to his left and that world's distraught parody of day was escaping the sky a thirteenth time with no relief, no end to the horror that had awoken under their feet.  Fated, all had been slain below the mould-riven firmaments and cast out as an infant's ragged corpse from the slit belly of its mother.

The carpet of bodies caught his last empty clip and he cursed to the sky for his lack of foresight.  Would that he had remained with his own squad at the gate, and not try to save those mortals whose open ribcages now splintered underfoot!  At the least he would have ended it all and been worthy of forgiveness!  But that way was cut off now and he was abandoned.
With a scream of defiance, he tore his chain-cleaver from his back and bared his empty bolter at the shimmering mass of blades before him, daring them to scale the last fifty feet of ceramite and cut him down.  Amid them, Three and two, they wore skins of the PDF he had seen marching in a month ago, and he laughed at them; so proud they had been that day, glittering blue and bayonets sharp-- VANITY!  Their faces stretched now, once so pious moaned in hollow apathy now, eyes that shone soulless into his own now, all closing, closing, flayed and glittering, blood and rust, Doom!
Doom! 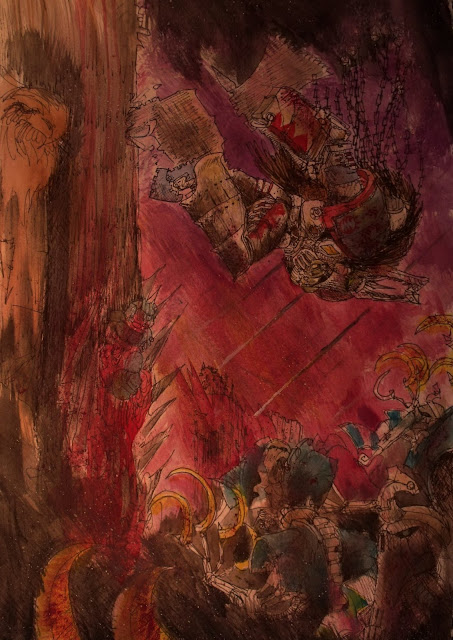 But the dawn did not rise upon that awful descent.  That day there was mourning in the darkness and in the rusted depths; five return when five should not have, one departed, led into madness and never to return.
And the silence bore witness of the silence, the dead mourning the dead in a voice that was never heard and would never still; for he was no longer.

So there we go.  How was it, did you like it?  It was more a paragraph than anything... but it was fun!  I wasn't really sure who I was writing about when I began, and that made it exciting.  Who was this martyr?  The picture wasn't at all accurate for a reason; I want to try and write to inspire you in your own 40K stories.
I've been thinking to write about titans next, so maybe next time I'll have some collegia fluff.
Thanks for reading! 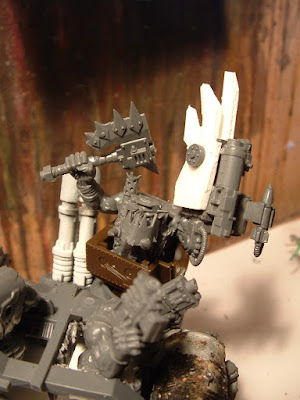 Introducing Bogfilla "Zogme" Pobjoy-- the Bad Moonz oddboy who desperatley wants to be a mekboy when he's bigger.  He earned his unfortunate nickname from when his boss told him to make him a trukk in four days (reduced to two, seeing as he was so up himself).

Zogme Pobjoy spent the first hours whipping his boyz into finding him a decent hull to work with while he gathered as much dakka as he could find.  There wasn't much to be found, but he made do.  The first day was over and only then was an empty rhino husk found, but nobody was particularly keen on working with it bar Pobjoy himself. 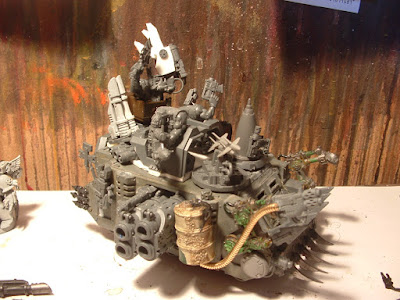 The dakka side; Zogme Pobjoy was only ever intending on driving in one direction. 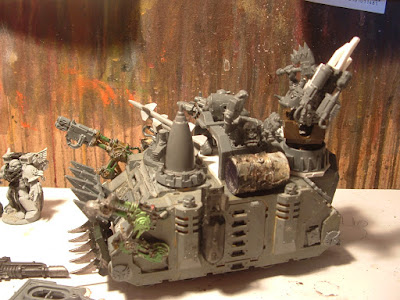 The not-so-much-dakka side.  Someone didn't know what they were doing...
Pobjoy, despite his enthusiasm hasn't the faith his creations will work, so he always has a plan B up his oddboy sleeve. 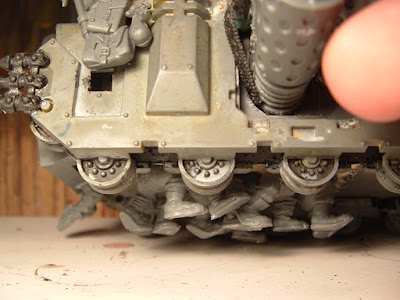 ***
So that's that, for now.  Apart from a bit of chain to tie some things down and more dakka, I think that's assembly done.  Shock and horror, I'm out of greenstuff now!  I'm going to have to find a new source somewhere off ebay...


Some blogging acquaintances were talking about blog content and what is interesting/expected of a blog.  I for one am quite fond of the little bits of fiction written about figures a blogger has made; a particular favorite being Eternalhunt (you'll find a link down the side).

Where was I going with this...?  I haven't been posting for a while because I haven't had enough content to show; spamming pictures of the one thing really doesn't appeal to me and I have trouble being verbose.  Plus the fact that I am in the middle of so many projects just now and my painting is SO bloody slow that's hardly anything to rely on--
So I then had a thought; I do need a bit of short story practice anyway.  What if, once a week, I write some 500-800 word bit of fluff and publish it here?  Perhaps with some form of illustration to go with it, that sort of thing.
What do you think?  At the least it'd get me posting on a more regular basis while I'm in the middle of so many projects-- my own fault, I admit-- and it'd be something nice for you to read, too.

Short story, once a week-- would you like this?  Please let me know!