After the initial hiccup...

... Things began to fly.  I wanted to make a thunderhawk since I first saw it on FW, but never got around to it until june last year was it?  I got some plastic bits cut for me, BUT it ended up a terrible money-waster, for the plastic couldn't be touched by any glue.  At all.  You know how normally, plastic cement melts the two surfaces together?  I had a crack at it with the blowtorch and it still didn't melt.  So I couldn't even purge the xenos filth with fire and brimstone.

Talking to my dad about this, he said he had a sheet off the tiny gas fridge we had in our old camper, that might work...? 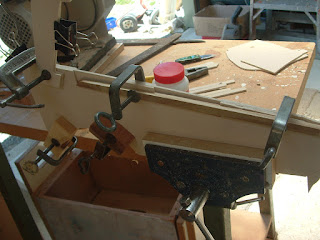 Right now it's just too bloody hot in my hobby room for me to concentrate (I believe it's called heat syndrome, a thing I suffer from a lot) so I relocated into dad's workshop.  The wings were cut out-- again-- and put together in three layers to build up width. 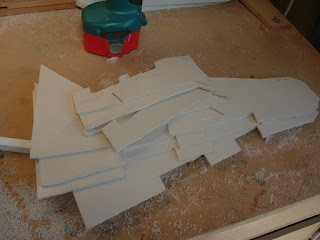 Hideously rough.  They took ever so long to clean up after what the band-saw did. 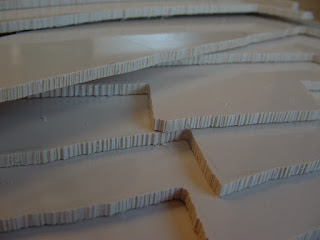 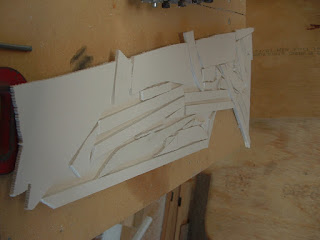 Observe, the middle layer I filled with a mosaic of scraps.  Waste not...
At the same time I was putting the body together. 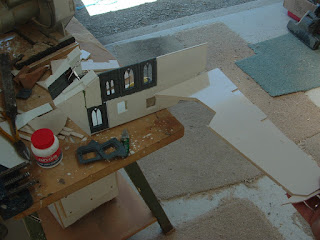 Dry-fitting looks promising.  The wings will be detachable for storage.

Also, as far as interior goes, I will be concentrating on that later.  In the form of a small box that'll slot in afterwards like the dollhouse form Arietty.

If you can't tell from the terribly messy photos, this isn't an ordinarily-shaped thunderhawk; because I can't copy anything to save my life, I'm calling it a Nastrond "Ringprow" pattern and hoping no-one'll mind.  It has an extended troop bay and ridiculously over-sized wings because reasons; maybe more lascannons for anti-air support and a cyclone missile launcher just behind the front door.  Under WYSIWYG rules I hope to make it work.

That is, if I even finish it.