Painting guide: or, at least, how I'm painting skaven these days... 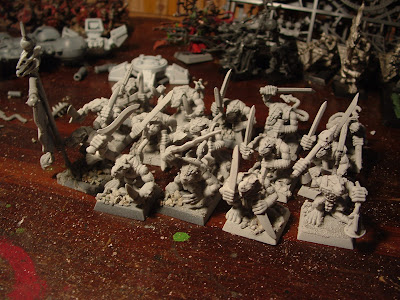 Right, so I'll be turning this 15-man regiment into something like... 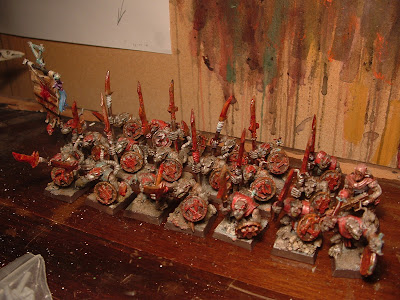 ...this.  Except with two hand weapons instead of a shield.  And fifteen instead of twenty. 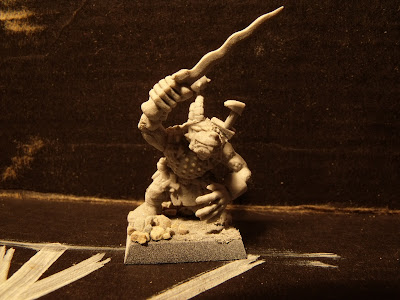 Right, so obviously we have to start with a white undercoat, being me and everything. 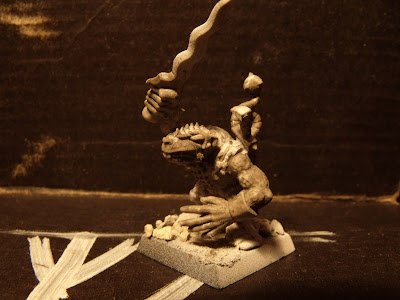 Stormvermin fur gets splotched on with a big brush; we're not going for neat here, not yet we aren't. 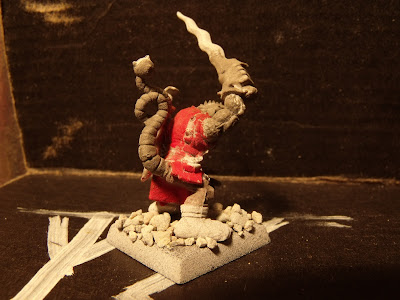 Next is the red.  This could be for metal or cloth; the metal would then get an extra step-- I'll let you know when-- for weathering.  Again, just splotched all over the place, just try not to get it on the grey. 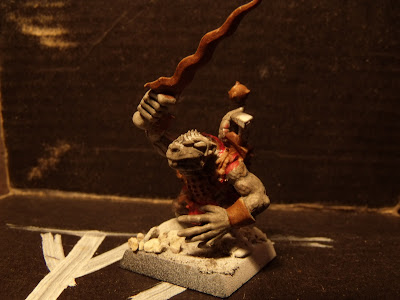 Mournfang brown next, for leathery bits or bronze.  We're getting into smaller brushes now.
Note I'm not giving exact brush sizes-- one, I find it easier to estimate; two, I don't even know what size brushes I'm using... hee hee, you don't even know if I'm just using sticks. 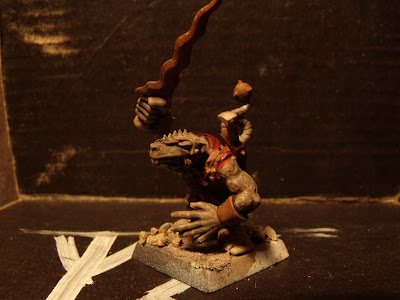 Agrax earthshade goes on next, along with a bit of nuln oil for deeper shadows.  Make sure to wash the base too, it'll make it easier when you get to it.
Oh, listen to me, instantly assuming my entire audience paints the figure first... 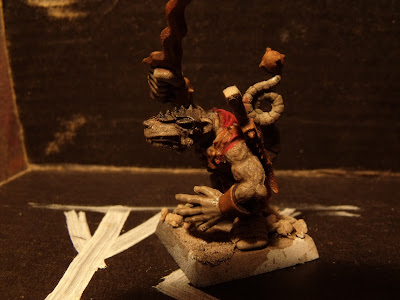 Black goes on next for where bare metal will be.  Also, drop a dot into the little chap's eye socket, it'll help them stand out later.  The eyes, I mean.

Next up is bronze and silver.  Apply the bronze first, because here's were the extra step for red metal comes in.  Once you've painted bare metal blades and armour and whatever, take your smallest drybrush, get some silver off the other brush and go over the red metal.  Also the bronze. 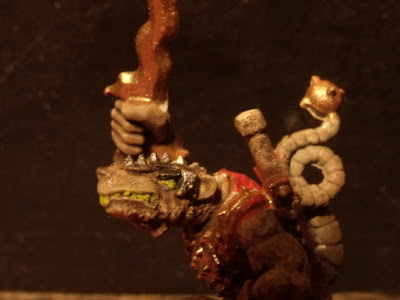 Now with your finest brush,  go over the teeth and pick out the eyes with bright yellow.  If they look a bit too disgusting, you might want to use a bit of nuln oil before the next step. 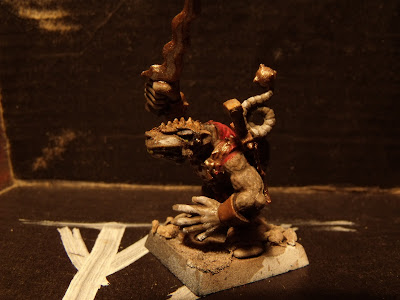 The next bit is to add highlights to where the fur is less... furry, I suppose.  I use stark white, but you could use something like reikland fleshtone or even a blue?  One thing I've seen a bit on skaven is the skin colour is usually done quite skin-coloured and they end up looking like monkeys, particularly the older sculpts. 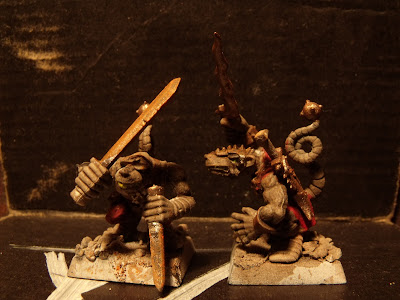 My recipie for rust is pretty simple at the moment.  Nuln oil, a watered-down layer of mournfang brown, and a jolly good drybrushing of ryza rust over the top. 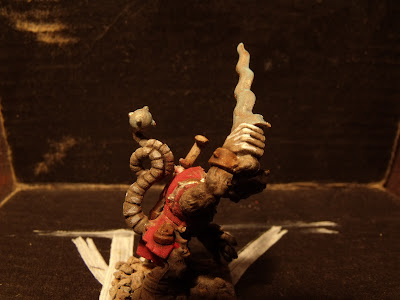 Nikhala oxide is the second to last step.  Not much to see here, carry on guardsman. 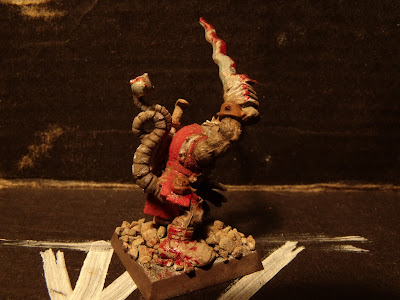 Blood FTBG is the last step.  It'd help a lot if you had a dry, frayed old brush for this; thin, stiff bristles make it a lot easier to generate random splatter. 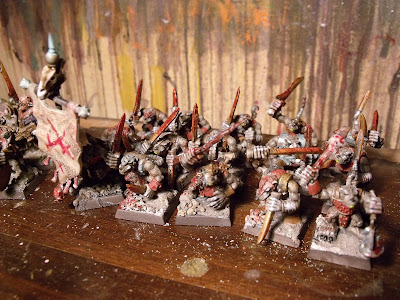 So just make sure you included all your other skaven into the steps and you should be set!
Now, using the following technique, you ought to have a regiment of table-ready skaven out of the box in a Saturday-- if you get up at seven and neglect your family until 5 in the evening.  The two longest steps would be the undercoat and the washes drying, but in which time you could just as easily work on your inquisitor kitbashes.
So, what's next, I wonder?  Some rat-ogres, I reckon.  They'll be getting a few more steps, seeing as there's only three of them and (I really don't play skaven!) they look quite useful, so they deserve a decent bit of work. 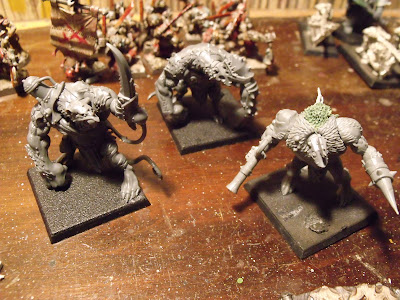 ***
... And as always, in other news:
The scenery bits are finished!  We've got all sorts here, mostly intestines out of the body with some unfortunate Cadians thrown in and a pile of pig offal just for giggles. 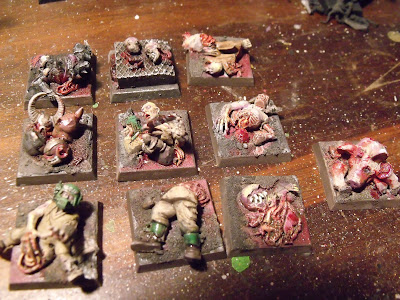 And the pool at Bethesda is looking a lot more finished now.  Still wondering about how to achieve a decent, visceral, purpley-red colour for the... whatever it is... in the pit.  Been playing a lot of Dante's Inferno for insparation.
Oh God help me, I made a pun... 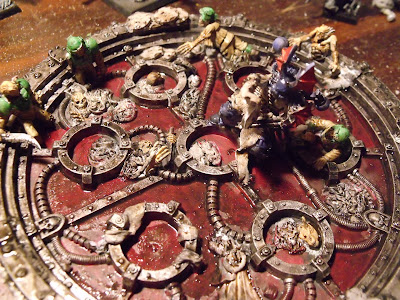 So, that's that!  How to paint skaven nice and quick.  Next time, we'll be assembling/converting the avatar of Ynnead into a hive crone*.