From the start I liked the image of my knights striding through an old graveyard.  The picture I'll paint with them will be the defense of their home world, advancing through the mist to a forgotten front where their enemy waits to die.  Layers and layers of war have been poured across this graveyard; time passes and nobody remembers the names on the broken stones anymore, though between decades of corpses and bloodstained rocks lies a convoluted history of Imperial piety and intolerance. 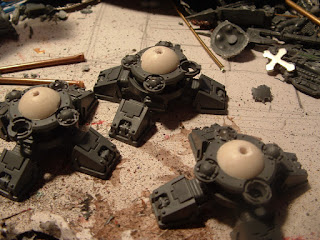 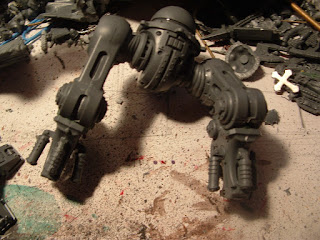 Not sure where to start, so I'll begin with the legs.  I began on the wrong foot last year when I made the mistake of chopping the legs to bits without any clue at all what I was doing!  I think that's what put me off completing the project the most.  I later found this tutorial from The Dice Abide which helped me a lot (I used greenstuff instead of plasticard strips, so sue me) but that still left the question of ankles and, by extension, the pistons 'round about.

Picking it up now and looking at it with fresh eyes certainly helped as my admech watched helplessly-- and unpaintedly-- on as I begun to repeat what I had done on a second pair of legs.

I drilled out the pistons and used brass rods tipped with the bulbs from off the original pistons, two of which I lost so I replaced with the tops off some flying stands.  The energy tubes from the necron warriors kit worked nicely for the heel piston; I'm sure there's another bit of pipe the right width, but plastic was just that bit easier to work with.  For the record I lined all the pipes up attached to the pistons before gluing the legs to the ankles, in that order.  Of course the stress of working with super glue hardly helps... 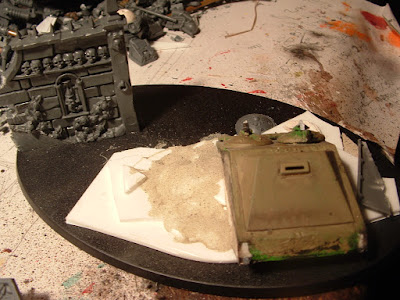 And onto the base!  While it's best to know what you want it to look like, it's also better to pose your IK legs first and then work the base around them.
So there were the remains of an old rhino kicking around in the drawer, how exciting.  I used slabs of plasticard to build up the ground a bit around it before going over the whole thing with an odd, extra-thick glue sort of medium... 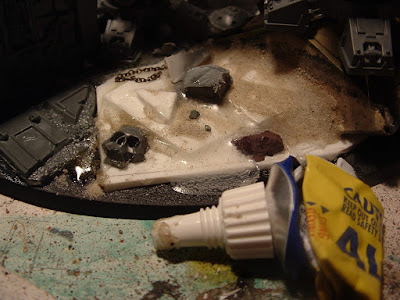 No idea what it was to be honest.  It came in a tube and it stank, but other than that I have no proof it really was glue... 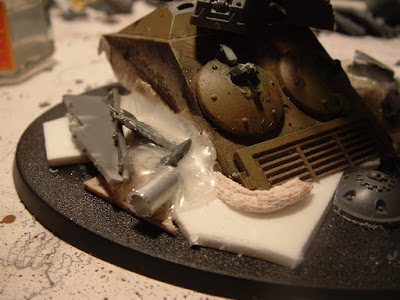 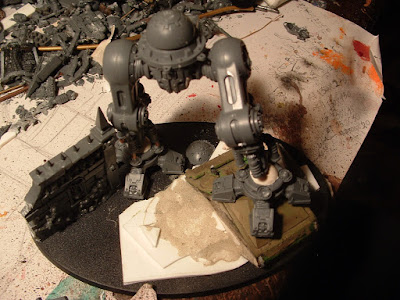 Legs in place.  The bit of sand was where I was experimenting and it didn't work as desired. 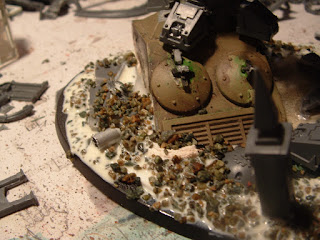 After that was another odd super-thick glue, and this time the coarse grit went on.  It went on first, because the ground I was trying to go for was boggy, at least outside the graveyard.  In battles past stones have been stamped to the surface, and afterwards the green has tried to grow back; constant rain left the ground a sludgy ruin.
Trust me, I know ground like this.  Hee hee, I've worked on cattle farms before! 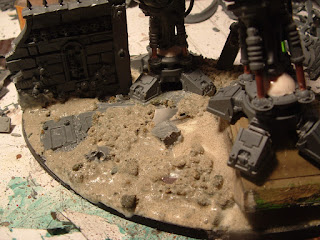 Sand over the top of the stones for the soil.  Some of the sarcophagi lids have floated to the surface. 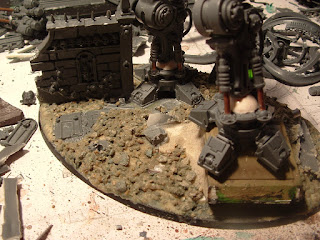 Various sprinklings of grit and sand until I was happy with the result.  Memories of Sunday school days seep back to the forefront of my mind as I make a beeline to the kitchen and wash off the gritty PVA from my fingers...  My my, surely it shouldn't be this messy? 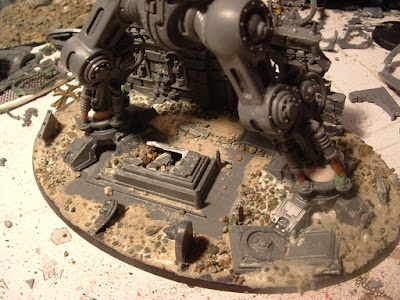 With a confidence I didn't know was there I set forth immediately after and began work on the second base.  This is mostly inside the graveyard, so the ground will be a bit drier, less boggy; the sand went on first this time.  Also more gravestones. 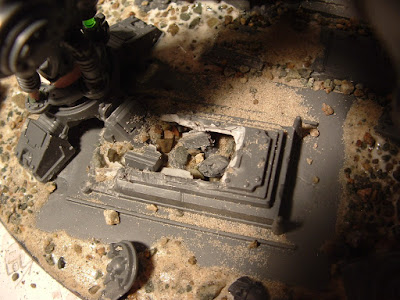 He stepped on a tomb by mistake, but was it already open?

So here's where I'm up to with the current IK.  At the first, I had plans for a knight Warden named Aborted Sanctity, but as time went on that character split into two; Aborted Litre, the knight crusader, and Reprisal of Sanction, the knight gallant who's unfinished visage you see above.  I'm sad to say I'll be making him with his carapace shut, no cockpit, no pilot, I'm sorry.  The plans I have for aesthetic will make it all a bit awkward.  Looking at him from a distance, I wonder what putting the pauldrons on their sides would do to his image...

And that's that!  How badly did I do?  Don't be shy to share your thoughts.
I'm rubbish at landscapes, I know this.  Basing is not my strong point but I had a go and that was the important thing.  Don't wait until you're good at something-- do it now!  Do it badly and don't feel bad about it!  Remember that practice can't hardly be bought or waited on, and confidence only grows when tested.