Characters and OCs - is there a difference? 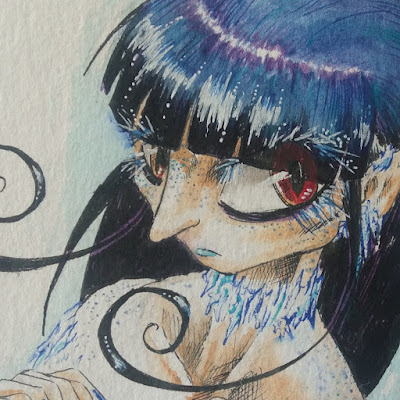 A question has been on my mind for some time and I'd like to try and straighten it out here: Is there a difference between a character and an OC?
Now, this might not be the sort of content you are used to on this blog; correct, it's not the usual thing. But it's something I've been mulling over for a while now and I wanted to get it down.
Also, you'll be able to see a side of my art you might never have seen before - clean! 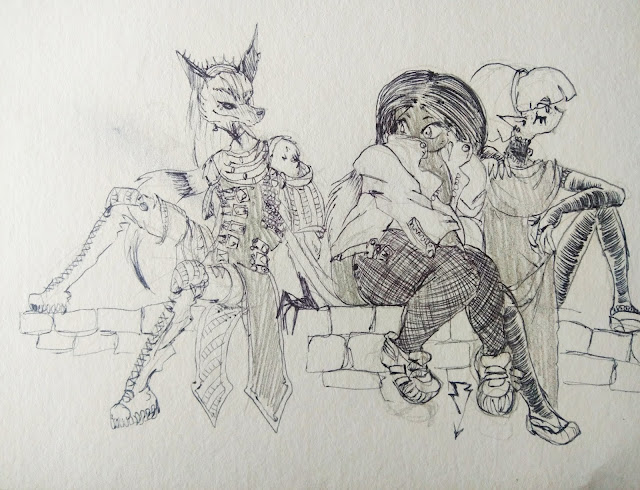 I believe there is, at least to my mind there is. On the left of the picture above is Djn of Tenbridge, a character from my trilogy. On the right, Kerindra and Fréki, two of my OCs. Now, the first differentiation might be style, but that's got nothing to do with it - I believe it's to do with the reason for their creation.
His relationship with Rygnir, the main character, was planned from the start of the story, what would happen and how they would interact. I may never mention this couple again in another Fairytale because their story has been told.
***
On the other hand, I drew K and Fréki to practice elements of their particular design, i.e plush bodies. I simply drew them the way they are, because they have elements I like to draw. The fact that they're a couple is actually because my wife said they'd be cute together, not because it was planned at all.
OCs, in my interpretation, can be created for myriad reasons. I have OCs I made to experiment with relationship dynamics or character interaction. In practicing art or testing certain traits, I've come upon something I've really liked and made an OC out of it. I even have some who originally were sprite edits!
OCs can be a refuge in a way, a means of getting the toxicity of the world out of your head. That's the reason almost all of my OCs are queer, in fact.
Many of them have backstories in one way or another, but nothing much in the way of actual narratives in which they play a part. However, I am currently working on an urban fantasy alongside my usual stuff, in which a particularly special OC is the protagonist. They are based largely on my own experiences as a kid; things I wanted to do or be (I always wanted to fly, talk to faeries, be a girl - you know, all those mythical things) but never could.
And yes, the dynamic duo Kerry & Fréki will be making a passing appearence too; a tiny window into their own little world, and a step on the road to becoming "characters" in the more regimented way I've described. 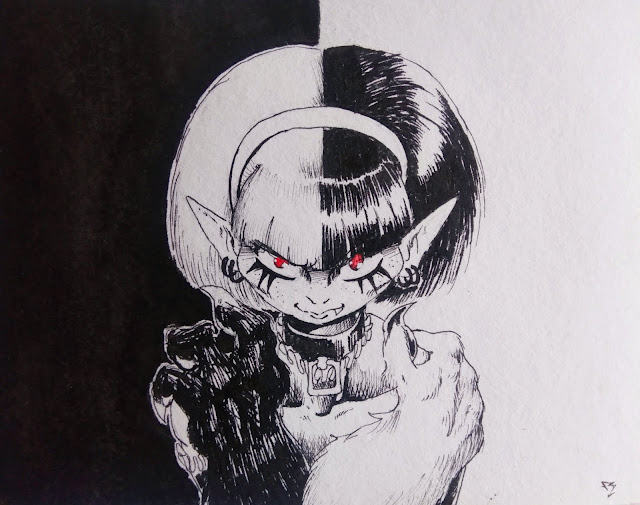 Characters, I feel cannot be experimented with or placed into situations outside their established body of work, while OCs potentially can. My wife and I are currently engaged in an ongoing DnD-esque narrative with some of our OCs in a vaguely fantastical setting. I would not be comfortable using a character in this setting.
I must have hundreds of characters by now. If you were to include every person I mention over the course of the trilogy you might say I had millions. However, I've only got about twenty OCs, in the sense of the word I've detailed; the people who appear in their stories I would consider characters, because they have a set reason to be there, a role to fulfill.
***
Well, I think that's everything laid out for my argument. I'm not exactly sure why I felt the need to write this down, but there we are. Have you any thoughts on the matter?
By the way, I wanted to apologise for moderating comments. Blogger seems to have become filled with spam bots.
Bye bye for now.
Posted by D at 12:51